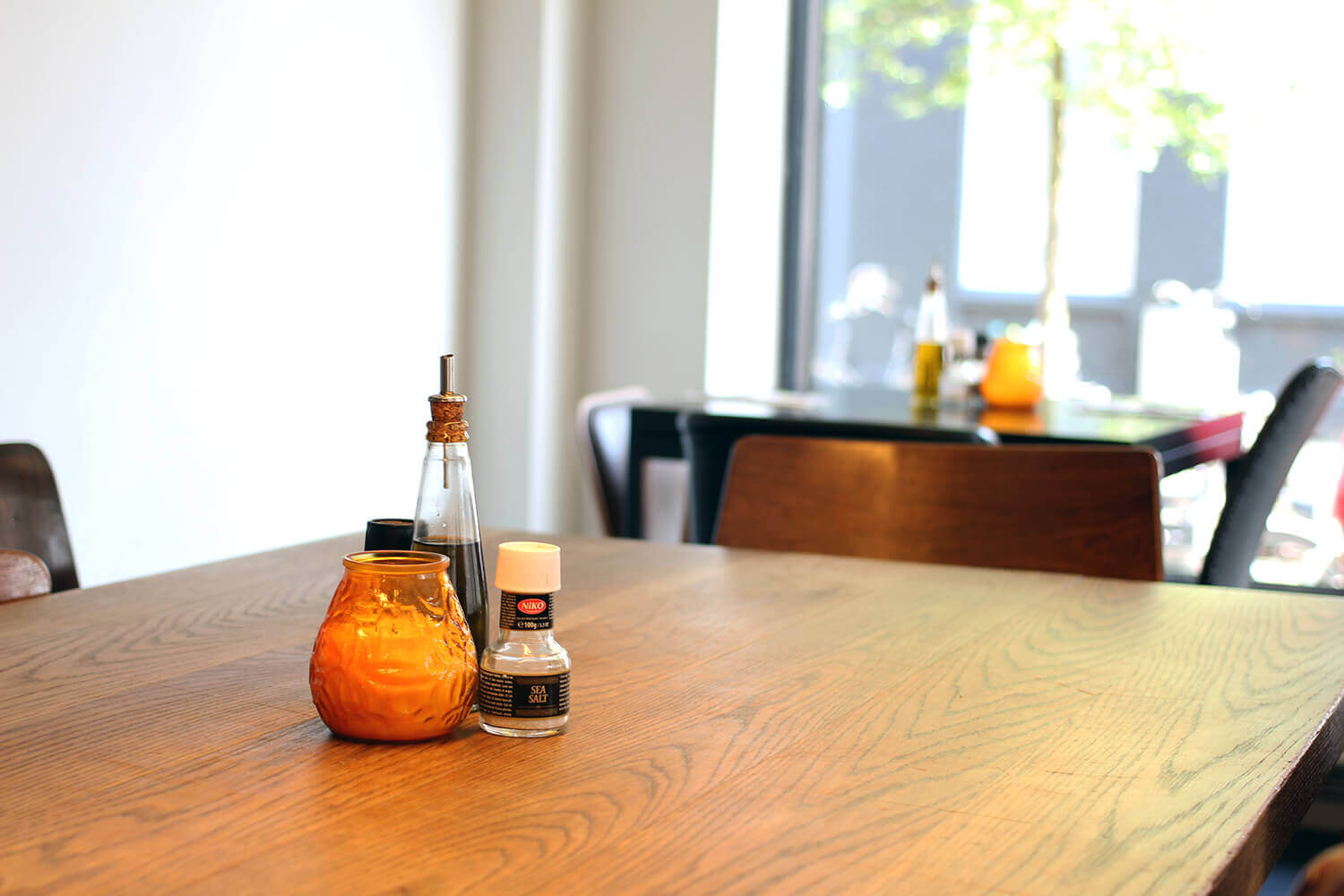 One of the questions I get asked most about visiting this city of mine is "Do I need to tip in Amsterdam?". My honest answer isn't really yes or no, but I suppose it leans more to no than yes. Man, that's not helpful, is it? Well, let me explain what I mean by sharing some advice about tipping in Amsterdam based on my experience of living here five years.

There are no rules about tipping in Amsterdam, as in there are no set guidelines that tourists or travellers need to follow regarding percentages or where and when you do or don't tip, but there are some things worth knowing. In general, tipping is at your discretion. I can't think of a situation where you are obliged to tip in Amsterdam (or the rest of the Netherlands) other than when you are in a decent (or fancier!) restaurant and you experience good service, but even then I can almost guarantee you will find people who don't consider tipping necessary.
While there is no tipping culture in Amsterdam like there is in the USA, for example, Amsterdam and the Netherlands are not places where it's offensive to tip and indeed there are some occasions where it's encouraged. What I will say, however, is that tipping isn't always expected and in some cases. not tipping would be considered the norm, especially if you experience bad service or a disappointing experience.
FURTHER READING: Looking for some tips for getting the most out of your visit to Amsterdam? I've got your covered with tons of Amsterdam travel blog posts, from the Ultimate Amsterdam Weekend Bucketlist and the 100+ Best Free Things to do in Amsterdam to a list of The Best Hotels in Amsterdam for All Budgets. You can find tips for visiting Amsterdam on a Budget, a super comprehensive Amsterdam Vegan Guide, tips for Finding Tulips in Amsterdam, an Amsterdam Neighbourhood Guide, and a Guide to Visiting Amsterdam with Kids.
You can also sign up to my newsletter to get my best 101+ travel tips and advice, and exclusive content sharing Amsterdam tips.
Now, let me go into some specific detail about Amsterdam tipping etiquette...

Do you tip in Amsterdam?

Generally speaking, in Amsterdam service and hospitality staff are paid enough so that tips are not expected to make up a significant chunk of their income. It's also somewhat true that Dutch people are naturally "economical" and don't like to waste their money, or over-spend. Yes, I'm trying to find a nice way to say that some Dutchies can be a bit tight, but perhaps I shouldn't sugarcoat it as many nationals joke and talk about this with us. I will just add that I have Dutch friends who are tight and Dutch friends who aren't, it's really the same as any other nationality, however, where I have seen that economical good sense (ahem, tightness) show itself quite often is in tipping, or not tipping as the case may be!
All this being said, it's equally important to remember that Amsterdam is an international city that sees floods of tourists and visitors arrive each day so there is now a sort of blurred lines approach to tipping, as in, many people working in hospitality or service industries will be open to tips and may even expect it from international visitors (especially North American travellers!), though they shouldn't be relying on it as a steady part of their income... I hope!

Places in Amsterdam where I tip

Places in Amsterdam where I don't tip

Bars
I hardly ever go out at night anymore (and doubt I will for some time - seeing as I'm pregnant and the mother of a two-year old!) but I believe nothing has changed in that nobody really tips in a bar in Amsterdam - unless they experience exceptional service or they hire an area for a function and a lot of work goes into it. Another thing you may want to keep in mind when drinking in a bar in Amsterdam is that you can often start a tab WITHOUT giving a credit card or deposit (though not always!).
Other hotel staff
Maybe it's me but whenever I check into a hotel, I'm normally the least prepared to give a tip. Even staying in a hotel in the city I live I don't seem to have any change or the right amount of change, and obviously I don't have much luggage to bring up to a room so in general I don't tip porters, bell boys or any other hotel staff if I'm lucky enough to be staying in one of Amsterdam's hotels for a treat. Again this is a personal decision (and a lack of organisation) but I may feel otherwise if I had a lot of luggage and was given a lot of assistance. To date, I've never really had someone make me feel awkward for not tipping!
Organised group canal boat tours
You know those large canal boats you see doing tour after tour after tour of Amsterdam, well, it may surprise you to know that I have done a few of them and I have never tipped. Partly because the experience isn't very personal and you don't really feel obliged to acknowledge good service but mostly because it really doesn't seem expected or encouraged.
Anywhere where the service is bad!
Arguably the thing I love most about tipping etiquette in Amsterdam is that if you experience bad service, you don't tip. And you are well within your rights to complain. The Dutch love getting their money's worth in any given situation and I've seen people return fruit and vegetables to supermarkets because they have gone mouldy before their due date - something I just see as a risk you take when you buy fresh produce. I have always felt tipping should be discretionary so I can really get on board with their approach to not tipping should service or their overall experience be lacking.
I hope this guide to tipping in Amsterdam was helpful! You can find lots more Amsterdam travel advice on my blog. Here are some good articles to get you started:

When is the Best Time to Visit Amsterdam?

Where to Stay in Amsterdam - Neighbourhood Guide

The Best Photo Spots in Amsterdam

How Expensive is Amsterdam?

Tips for Visiting Amsterdam on a Budget

The I amsterdam City Card - Is it worth getting?

Guide to Visiting Amsterdam with Kids

Best Things to do During One Day in Amsterdam

Your Guide to Amsterdam in Spring / Summer / Autumn / Winter

Tips for Seeing Amsterdam from the Water (Canal Cruise/Private Boat/Pedalo and more!)

Tips for Finding Tulips in Amsterdam (All Year!)

Tips for Staying in Self-Catering Accommodation in Amsterdam

The Best Day Trips from Amsterdam

A Local's Guide to King's Day in Amsterdam

Things to do in Amsterdam with a Dog

and if you're curious - The Reasons We Live in Amsterdam 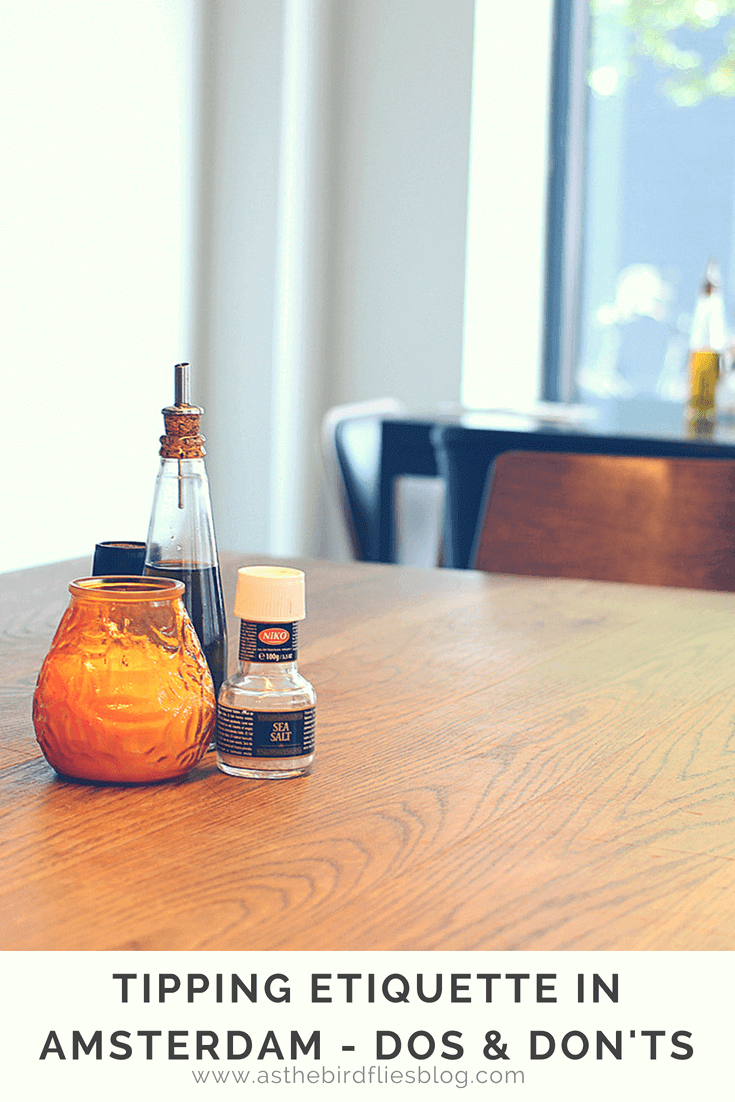 Londoner turned wanderer, Frankie is an author, freelance writer and blogger. Currently based in Amsterdam, Frankie was nomadic for two years before starting a family with her Australian partner. Frankie is the author of three short story collections, and is a freelance writer for travel and creative brands. In 2017, she launched WriteNOW Cards, affirmation cards for writers that help build a productive and positive writing practice. When not writing contemporary fiction, Frankie shops for vintage clothes, dances to 70s disco music and chases her two young sons around Amsterdam.
Find Frankie on Facebook, Twitter, Instagram, Pinterest, and Google+.
AMSTERDAM TRAVEL ADVICEAMSTERDAMHOLLANDTRAVELEUROPEAMSTERDAM TRAVELTRAVEL ADVICE
Next
Self-Love: How and Why Affirmation Works
Previous
On Writing: Best Writing Apps for Writing Fiction
Posts you may also like: