Amsterdam Travel: A Local's Guide to King's Day in Amsterdam 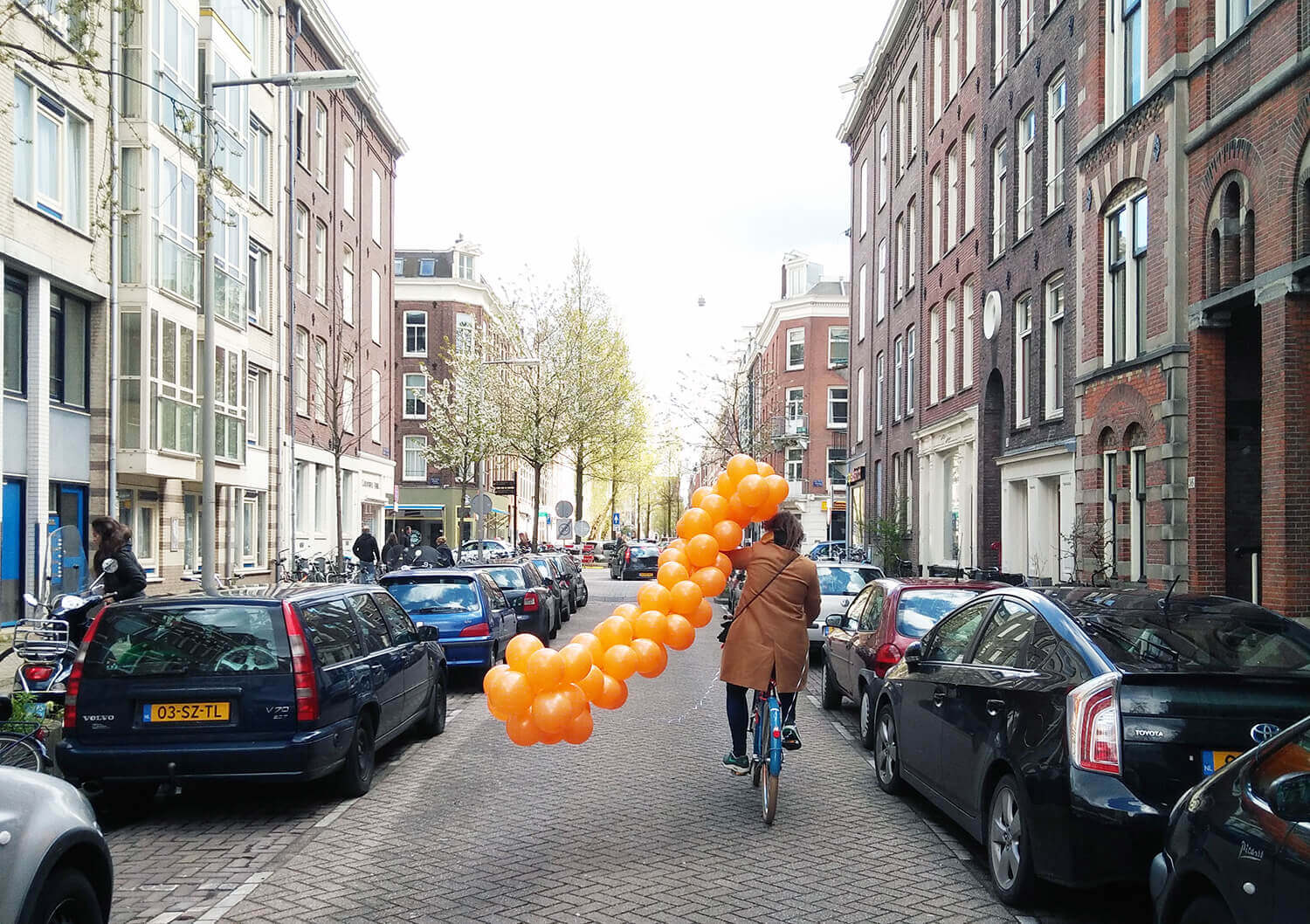 It's April. There's a little sun in the sky. There's blossom on the trees, the tulips are in bloom, and more and more boats are beginning to cruise along Amsterdam's canals. All this can mean only one thing. No, not that spring has arrived in the Dutch capital, but that King's Day in Amsterdam is just around the corner.

What exactly is King's Day?

King's Day or Koningsdag is a national holiday in the Netherlands where the King's birthday is celebrated on 27th April. Until 2014 it was Queen's Day or Koninginnedag (which is the mouthful to say that it looks like!) because Queen Beatrix was the country's ruler and the date celebrated was 30th April. This wasn't Beatrix's birthday but was the day her predecessor (and mother) Queen Juliana was born and Queen's Day was celebrated on this day from 1940 until Beatrix abdicated, which was actually announced on Queen's Day in 2013. I have a theory that Beatrix was happy to keep the national holiday in April because her birthday is 31st January, and let's be honest who wants to go out all day and drink in the streets when the temperature is potentially hovering around freezing. I think this is jolly decent of her. It's also very handy that the current monarch King Wilhelm-Alexander has a birthday also in late April. Very convenient.

The Dutch Royal family themselves are rarely in Amsterdam for the celebrations (they normally choose a different Dutch city to visit) and there isn't really any official celebrations happening in the city (at least not in 2018 when this was written) but there are lots of events and mini-festivals happening. You can find more information about these here.

So that's the history of King's Day, but what does it actually look like. Well, the best way to describe it is as a sort of unofficial street party festival dominated by the colour orange, and certainly in some places, by very high spirits (thanks to other kinds of spirits). In other words, King's Day in Amsterdam (and across the country) is ONE BIG PARTY.

Now you know why nobody is working on 27th April, why the streets are full of people, why it's impossible in some areas to walk further than a few feet at a time, and why some people are having a few drinks, but how do you as a visitor to Amsterdam join in and celebrate King's Day?

So, the first important thing you need to know about King's Day in Amsterdam is that everybody has a day off work. The second important thing you need to know about King's Day is that it has become a celebration of everything Dutch, and when I say Dutch, I mean ORANGE. This is the colour that you need to wear on King's Day, no matter where you're from or how good orange does or doesn't look with your skin tone. You should also consider wearing red, white and blue (the colours of the Dutch flag) and face paints are always a good idea on King's Day (and not just for little children). If you manage to get to Amsterdam a few days before King's Day, then head to HEMA or any shop really and stock up on some orange clothes you'll only ever wear once, or at leasst invest  1 Euro orange garland.

Now before we go any further, if you're young, free and unattached from dependents, it's worth knowing that the King's Day party really starts the night before... on King's Night. This year (2018) King's Night falls on a Thursday so not only will everyone have King's Day to recover (or top up alcohol levels) but there will also be a WHOLE WEEKEND to wallow in self-pity with a hangover while trying to scrub off that painted Dutch flag off your face. Needless to say, as the mother of a two-year-old, I will not be going out on King's Night, but have no doubt if you do you'll stumble across some great parties, even in just the normal bars of Amsterdam where often live music, street parties and DJs are arranged. Alternatively you could look up some of the club nights (a quick Google search should do the trick!) or some of the bigger festivals happening around Amsterdam. Actually check out this page for everything that's happening each year on King's Day and King's Night.

Admittedly, very few people actually celebrate the King - other than by donning plastic gold crowns - it's more a celebration of errr, life. And the Dutch in their thrifty ways have come to do this by having these so-called vrijmarkten, or free markets. This where anybody, anywhere can sell their stuff on the street. And they do. Gaffer tape goes down marking "bezet"  taken spots for people sometimes week in advance and early in the morning of King's Day the most serious sellers set up their wares on old bed sheets. This is arguably the highlight of King's Day for many young families and those not interested in drinking a canal's worth of beer. Kids often set up their own stalls (most commonly in the city's parks - head to Vondelpark, Sarphatipark, Beatrixpark, and Westerpark to see this) and they can be surprisingly industrious with many selling home-made cakes and lemonade, others set up games to play for 50 cents a turn, and last year we even saw a few live bands! Now I have a young son, walking around the free markets and picking up a few old toy cars is a really nice way to soak up the lively atmosphere and feel like you're taking part in a community-enhancing event rather than just a piss-up! 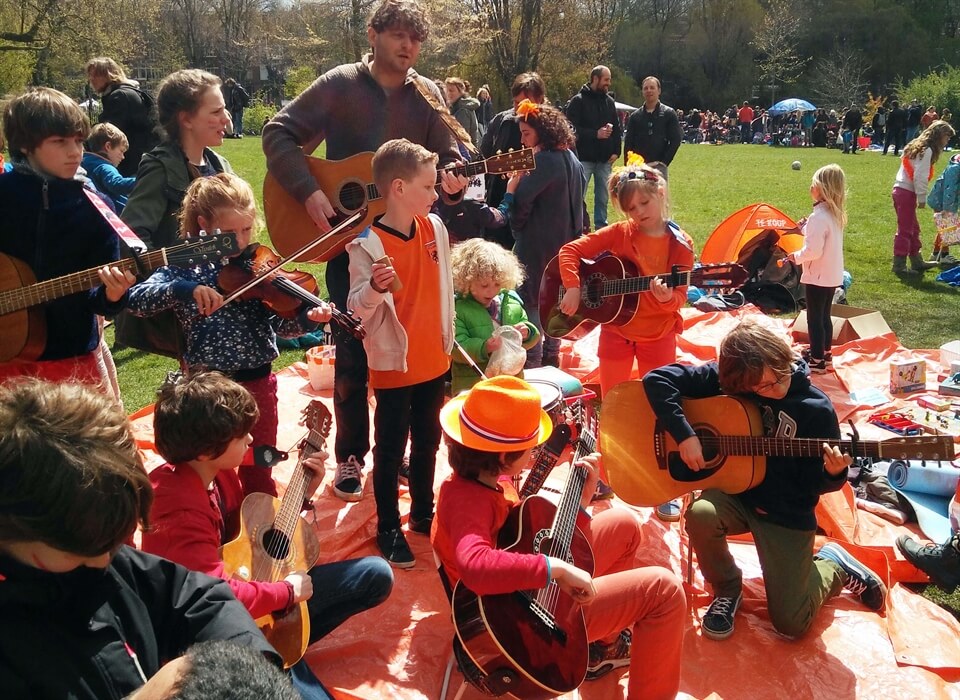 The last few years has seen King's Day coincide with some cold and wet days, but in the past the weather has been good enough for bare arms and legs and sunglasses all day long. If the forecast is cold, wrap up warm because it is significantly harder to get in the party spirit when you're damp and cold and need to find warmth and shelter but surprise, surprise all the bars and cafes you find are rammed full!

After the free markets die down, this is when the bigger kids start to have some fun. Bars put their music systems outside, trams and traffic suddenly stop, and the streets fill up with people wearing orange and carrying Heineken cans. In my younger years, we would often head to Utrechtsestraat for a big street party but you'll find these happening all over Amsterdam on King's Day with the ones closer to the centre of town being understandably busier and slightly more chaotic to handle. Don't expect parties to wrap up until after the sun has gone down and if you're staying close to one such street party and you actually want to sleep that night, I hope you've got ear plugs and a lot of patience!

Party on the water

While there are plenty of parties happening on the street, you'll also find one big festival taking place on Amsterdam's canals. Think a sea of orange on boats wedged in together nearly everywhere you look and you're close to picturing what King's Day is like on Amsterdam's canals. This is definitely not the day to decide you want to take your brand new boat out for a spin... If you are lucky enough to get a chance to be on someone's boat I hope your bladder is strong and your captain isn't precious about boats bumping up against his.

On a serious note, it's highly unlikely you'll be able to hire a boat on King's Day (and I strongly recommend you don't) save seeing Amsterdam from the water for another day. If you are going with someone else on King's Day, I strongly recommend they check they know the special rules and regulations for heading out on the water on King's Day because there are additional restrictions, for example, boats longer than ten metres are not permitted on Amsterdam's canals. Find links to more information here.

King's Day is arguably the only day of the year in Amsterdam where you would be foolish to try and cycle anywhere. Certainly in the city centre and central suburbs you'll find there are so many people, and so many free markets on the street, that it's impossible to cycle through the crowds, and likewise pushing a bike on foot is akin to torture unless you like the feeling your walking backwards. While public transport does run a Sunday service on King's Day, my best advice is to walk everywhere. Also this is the best way to soak up the party atmosphere.

Stock up on drink before the day!

If you're coming to Amsterdam to party on King's Day, arguably the worst thing you could do is leave buying your tipple of choice to the actual day. Most of the supermarkets sell out of ALL booze before midday and they won't get reinforcements at all that day. So make like the scouts and come prepared! 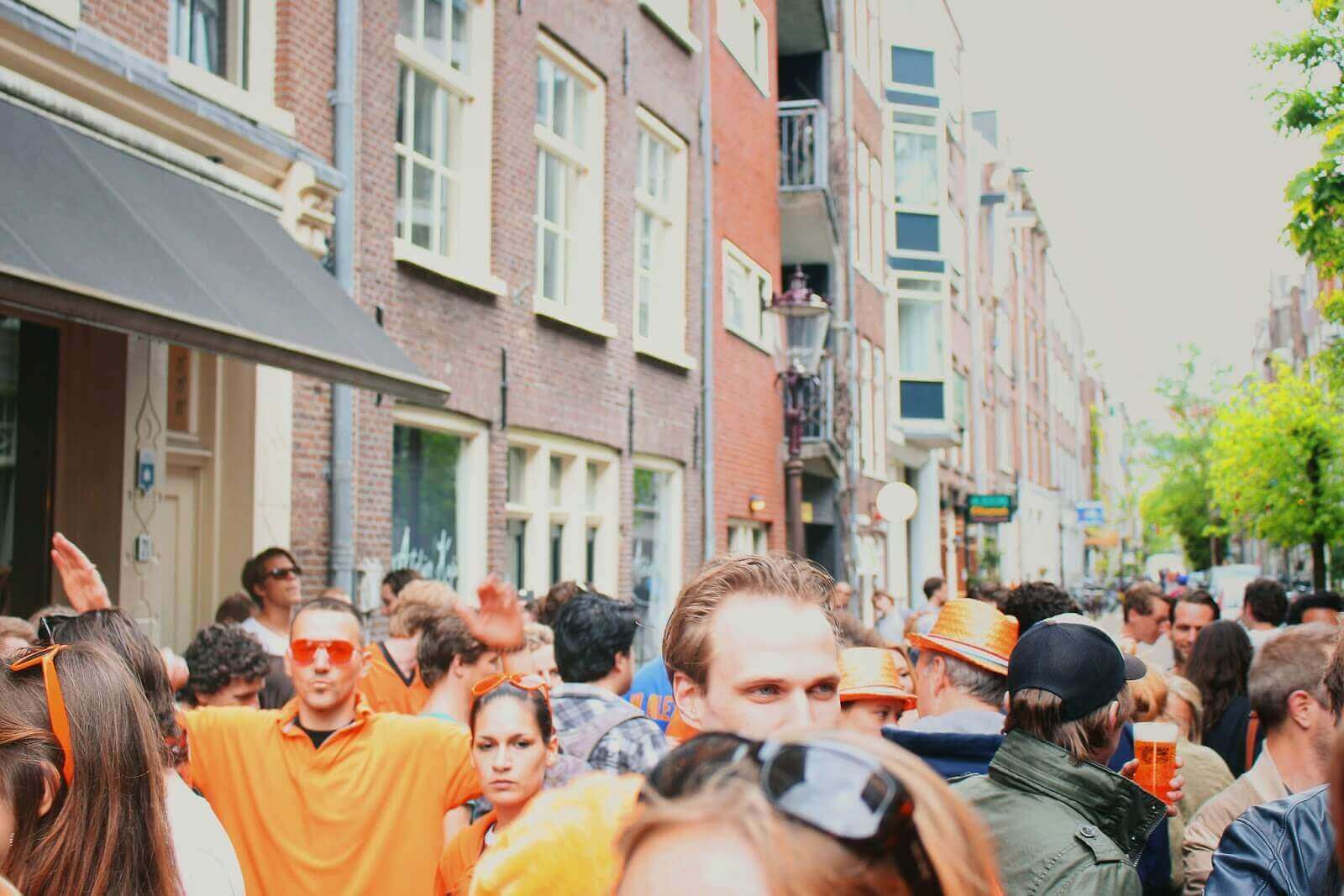 Get cash out in advance!

The other thing you'd do well to get in advance is cash! Especially if you're planning on going wild in the free market aisles as you can bet most will want only cash. The queues for ATMs on King's Day are soul-destroyingly long so do yourself a favour and fill your wallet the day before!

Book your travel and accommodation in advance

I possibly should have mentioned this earlier, but hey I got swept away on a wave of orange excitement thinking about King's Day in Amsterdam, but needless to say this is a very busy time in the city and I strongly recommend you book your flights, travel and accommodation as soon as possible to avoid missing out or spending more than usual. Here is my neighbourhood guide to help you choose where to stay in Amsterdam. 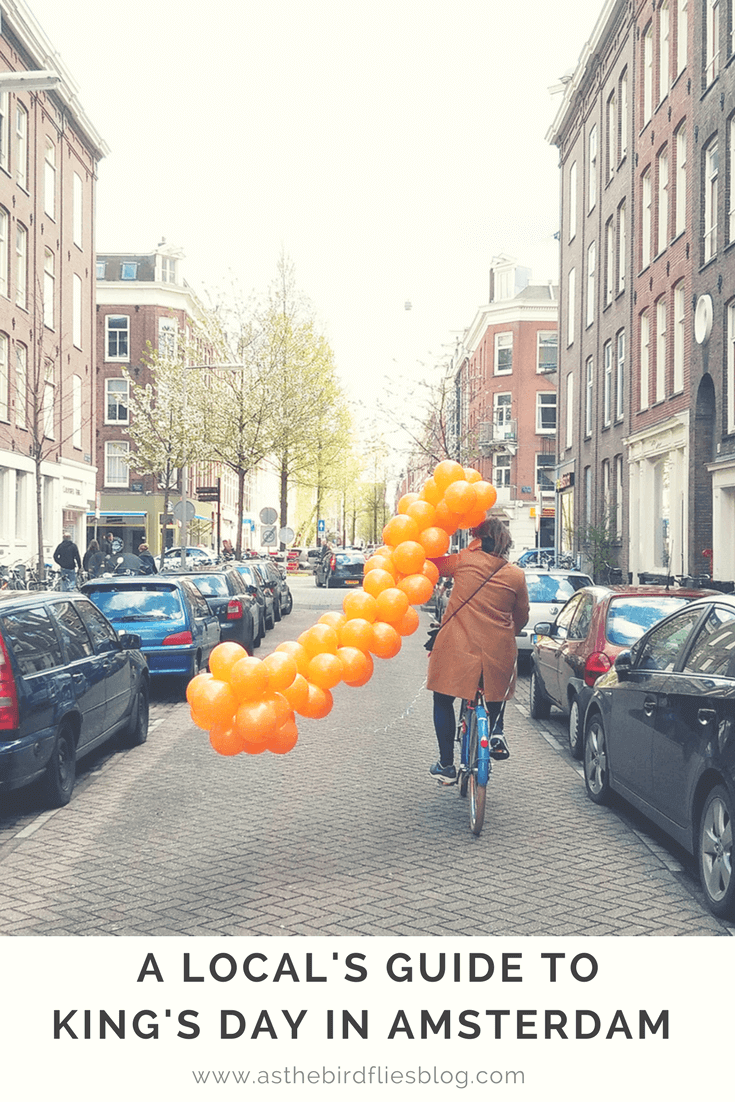 Londoner turned wanderer, Frankie is an author, freelance writer and blogger. Currently based in Amsterdam, Frankie was nomadic for two years before starting a family with her Australian partner. Frankie is the author of three short story collections, and is a freelance writer for travel and creative brands. In 2017, she launched WriteNOW Cards, affirmation cards for writers that help build a productive and positive writing practice. When not writing contemporary fiction, Frankie shops for vintage clothes, dances to 70s disco music and chases her two young sons around Amsterdam.
Find Frankie on Facebook, Twitter, Instagram, Pinterest, and Google+.
AMSTERDAM TRAVELAMSTERDAMTRAVELEUROPETHE NETHERLANDSLIFE IN AMSTERDAM
Next
Give the gift of reading at Christmas - Signed copies available!
Previous
Travel Advice: How to Help a Toddler with Jet Lag
Posts you may also like: