I chewed (geddit!?) over writing an indepth review of Eating Amsterdam's food tour of the Jordaan area of Amsterdam but I realised too many words would give too much away.

And this is an Amsterdam food tour that is best approached with as little knowledge as possible...  that and a HUGE appetite.

As well as teasing you with some photos of nearly everything I ate, I'll share just five of the many, many things I learned on this tour, which featured foods I was already familiar with and places I've seen before, however, the whole experience was still an engaging and entertaining one and very, very satisfying... in terms of both hunger and knowledge.

1. Cafe Papeneiland is a brown cafe I've cycled past many times but always ignored.

It's one of the oldest bars in Amsterdam and it has a very special history to do with its name (which I intentionally won't reveal). It's also where the tour started and it is definitely where I have tasted one of the best Dutch apple pies since I've been in Amsterdam... and believe me when I say that I've tried many, many slices of the stuff since I arrived. 2. Of all the dishes I tried on this tour (there were several, meaning this tour really is fantastic value for money), my favourite didn't actually come from the Netherlands. It wasn't typical Dutch food. And it wasn't really a meal. "Broodje Pom" is a Surinam type of sandwich, a description of which fails me, but I'll try: It has chicken, it has the South American Malanga root vegetable and it has one heck of a punchy flavour thanks to a mysterious mix of spices I could only dream of re-creating.

The more Surinam food I try, the more I want to eat and I urge you to try some if you ever visit Amsterdam. 3. Bitterballen are named after the drink they were served with, " bitter ", which is a kind of alcoholic liquour or digestif distilled from plant extracts. I can't tell you how much it pleases me to know this as I'd always wondered about the name of the Dutch's favourite borrel snack, and yet never actually got around to finding out.

I also saw the tour organisers go to great lengths to get these bitterballen to us during the section of the food tour that takes us to Amsterdam's canals... Bonus points for effort! 4. I really don't like licorice. To Dutch eyes, this makes me a bit of a weirdo. (The average Dutch person eats more than 2kg of the stuff a year.) Their love of "dropjes" is not one the average tourist would come across, but just a few minutes with Mariska, the owner of Het Oud Hollandsch Snoepwinkeltje  (The Old Holland Sweet Shop), and you start to understand why this love affair is not just a fling. I did my best to try it and like it, seeing it as some sort of Level 2 Dutch initiation, but I'm sorry sweet Dutch friends, but I hate it. However.... 5. ...I tried the Dutch delicacy of herring for the first time just a week ago. This was my second tasting and I can now say with some surprise in my throat - and not a herring bone in sight - that I really rather like it. Maybe Level 2 isn't so out of reach? One more fact you should know, this tour features a very special canal cruising experience. I could write a whole new blog post about the boat but I believe it's worth discovering for yourself should you be lucky enough to be in town and take part in an Eating Amsterdam tour soon. 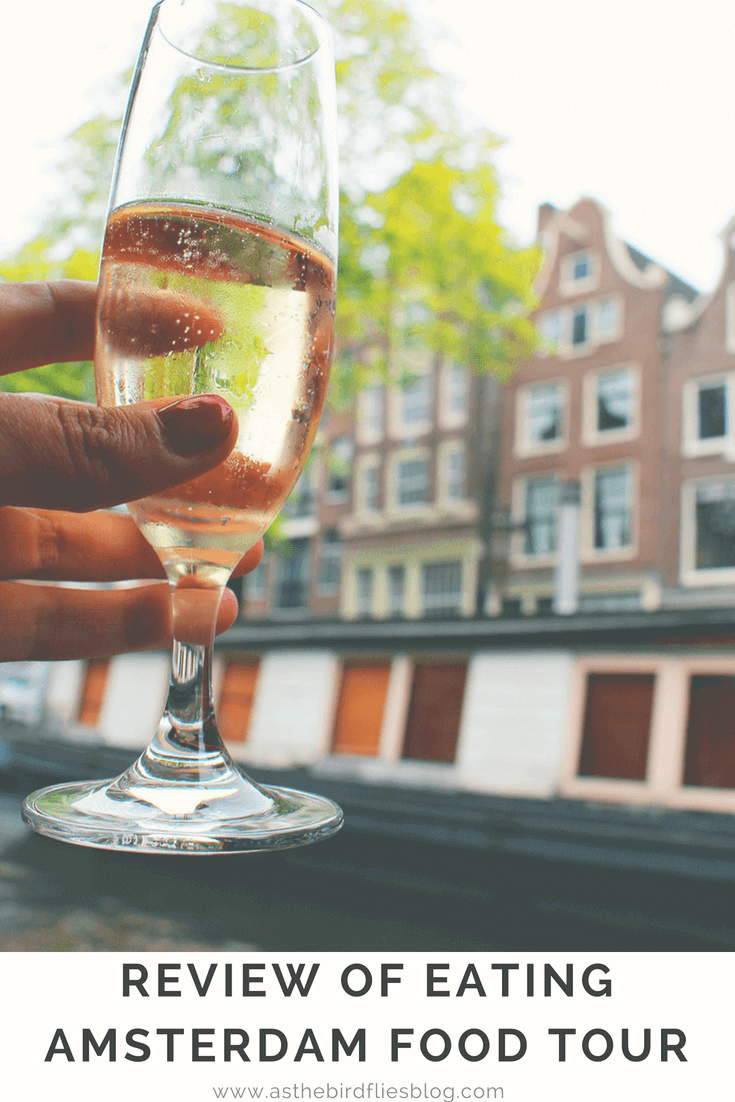 Disclosure: I was invited to join their Jordaan Food Tour by Eating Amsterdam and I'm very grateful they did. However, all views, opinions and subsequent indigestion are my own. I highly recommend this experience as a high-end, extremely well put together food tour of Amsterdam and a great introduction to Dutch food and Amsterdam history including that a very special boat tour.

Londoner turned wanderer, Frankie is an author, freelance writer and blogger. Currently based in Amsterdam, Frankie was nomadic for two years before starting a family with her Australian partner. Frankie is the author of three short story collections, and is a freelance writer for travel and creative brands. In 2017, she launched WriteNOW Cards, affirmation cards for writers that help build a productive and positive writing practice. When not writing contemporary fiction, Frankie shops for vintage clothes, dances to 70s disco music and chases her two young sons around Amsterdam.
Find Frankie on Facebook, Twitter, Instagram, Pinterest, and Google+.
FOOD LOVEAMSTERDAM FOODAMSTERDAMTRAVELEUROPE
Next
MusicMonday: Love from Lisbon Playlist
Previous
On Writing: About My Writing Life
Posts you may also like: