Amsterdam Travel: A Walking Tour of the Red Light District

As with most Amsterdammers - foreign or born and bred - I have a love-hate relationship with the Red Light District. I hate how some tourists are blindsided by it, reluctant to step outside its boundaries, the booze, weed and sex keeping them stuck to just a few small streets like a magnet. They leave thinking that only the RLD is Amsterdam. They have no idea what lies outside these narrow streets, much of which feels more like the real Amsterdam to me.

But few of us can deny that De Wallen (the Dutch name which literally translates as "the ramparts") is an undeniable part of the city. In fact, for Amsterdam's earliest centuries, it was the city, and it's where you need to go to dig into the deepest parts of Amsterdam's history, and I finally decided to go and do this on a walking tour of the Red Light District, which I'm going to review for you today.

A private walking tour of the Red Light District

That's pretty much what I knew when I went along to meet Jan my tour guide from Amsterdam Red Light District Tours who reached out to me a while ago and invited me on a private walking tour. We met in the shadow of the National Monument in Dam Square and after he friendly introduced himself, asked me some questions about myself and explained what the tour would involve, we set out walking down Warmoesstraat.

As with my review of Eating Amsterdam, I'm reluctant to go into detail about every single thing we did on the two hour walking tour because much of it is better served up as a surprise. Instead, I'll tease you with photos and some special highlights from what was a series of unexpected activities blended in with a more traditional walking tour. Though how you could call this tour "traditional" when it involves strolling past sex workers and spending ten minutes chatting to a head shop manager commenting on the current state of business like he was discussing pints of milk and not magic mushrooms, well I think it's fair to say it's no ordinary tour.

The tour started off very well when we strolled into a shop selling gelato, cakes, macaroons and anything else sweet you can think of. Coffee and cake time already? I thought. Not quite. At the back of this trendy and popular cake shop, we found an unattended shop counter and on it was a mirror, a small pile of brown powder and some cut up straws.

"Have you ever snorted cacao?" Jan asked.

I shook my head. I have never willingly snorted anything. Not even my own... well, you get the picture.

I looked down at my pregnant belly then up at him and shook my head.

So he did it. And then, because I dipped my finger in and realised it genuinely was hot chocolate powder I thought why not. I dread to think what I looked like to anybody watching on, but it was a definite first and it actually cleared up a cold that had been lingering a little too long. Of course, I don't recommend anyone to do this at home.

This sort of set the tone for the rest of the tour: Expect the unexpected. Considering I've lived in Amsterdam for nearly two years now, I didn't think this was possible, but lucky for Jan, I'm the kind of girl who likes to be proven wrong.

As we walked around a series of narrow streets lined with windows -  some occupied with women in a rainbow of coloured underwear, others with curtains pulled - I asked Jan many questions about the sex worker industry in the RLD. In addition to providing some background he also explained that there have been some very recent protests by the sex workers against the local council who are trying to reduce the number of windows. It's believed their intention in doing so is "to clean up" the neighbourhood, something which has happened somewhat organically thanks to the Internet (porn) boom reducing the need for peep shows, live sex shows and video cabins, but of course one could argue that the demand for "the real thing" has remained constant. The sex workers certainly feel very aggrieved by this course of action and there were posters everywhere asking that their windows not be taken away from them. This led me to ask Jan what his opinion was of the sex trade in Amsterdam in terms of how many of the women were "forced" into the industry as I had heard that many of the women are still brought to Amsterdam under false pretences and subsequently made to work as prostitutes. He acknowledged that there is a lot of talk of this, and one theory is that this is the council trying to give off this image to gain local support for the clean up initiatives. But in the same breath he didn't deny that many of the workers - a majority of which are from Eastern Europe - are "forced" to work in the windows due to economic reasons (they can often make up to ten times the amount they would in a retail or waitressing job back at home). He also didn't dispute that it was possible some women had arrived in Amsterdam believing they would be doing another job and then obliged to work in the windows to pay back those who had brought them there.

My impression was that it's certainly a grey area and it's unlikely I (or Jan) will know the full story. It's also unclear what will happen in the future if the council continues its efforts.

These clean-up projects are largely in response to recent history which saw the Red Light District as one of the most dangerous areas in the country during the 1970s and 1980s when the heroin trade and police corruption left the streets a lawless battleground for drug wars. Be sure to ask Jan to tell you some of the stories from this time of organised crime as they're eye-opening and when you see this part of the city now, full of tourists sitting by the canals drinking beers, it feels like a world away.

Perhaps it's fair to say there are several worlds trapped within the Red Light District.

There's the world of sex, which this tour gives you a very definite introduction to not only by visiting a "Condomerie" but also by inviting you to watch a peep show...

There's the world of drugs.

There's a world of history. Highlighted wonderfully by climbing up the church tower of Oude Kerk, something you can only do during summer months. Worth doing for the views alone, and don't be put off by the narrow steep stairs - I did it six months pregnant so you'll be fine if you take your time.

And then there's the undeniable world of beauty of Amsterdam that even the Red Light District isn't immune from.

Jan led me back to Dam Square to finish the tour and I thanked him for not only educating me but also entertaining me. I'd forgotten how much fun my city was and I was naive to think that it wasn't possible to find this, and more, in one of the areas of Amsterdam I'm often reluctant to venture to.

Because I was wrong, the Red Light District IS Amsterdam. It's the city's historic core and where so much of its recent culture has evolved from as documented in a number of sources, not least Ed van der Elsken's famous street photography, but also anybody can see with their own eyes when they dig a little deeper than the surface. The RLD is not just home to a constantly moving flood of tourists, it's also home to real Amsterdammers albeit in many forms. It's where a young woman - for reasons possibly known only to her - can go to work, charging strangers money for sex, in relative safety. It's where a lifelong resident can sit on a stool in a brown bar for hours each day watching the tourists come and go from cities and countries all over the world because that's what he's done for the last decade or so. It's where a man intrigued by kitsch culture and the downright quirky can open up a museum dedicated to his collection of 5000 dolls. It's where, in the 1950s, a woman set up a Salvation Army outreach point to support the sex workers (the building is now a museum about her work). It's where sex workers today are actively protesting for their right to continue filling windows. It's where you can snort cacao for free, for crying out loud! 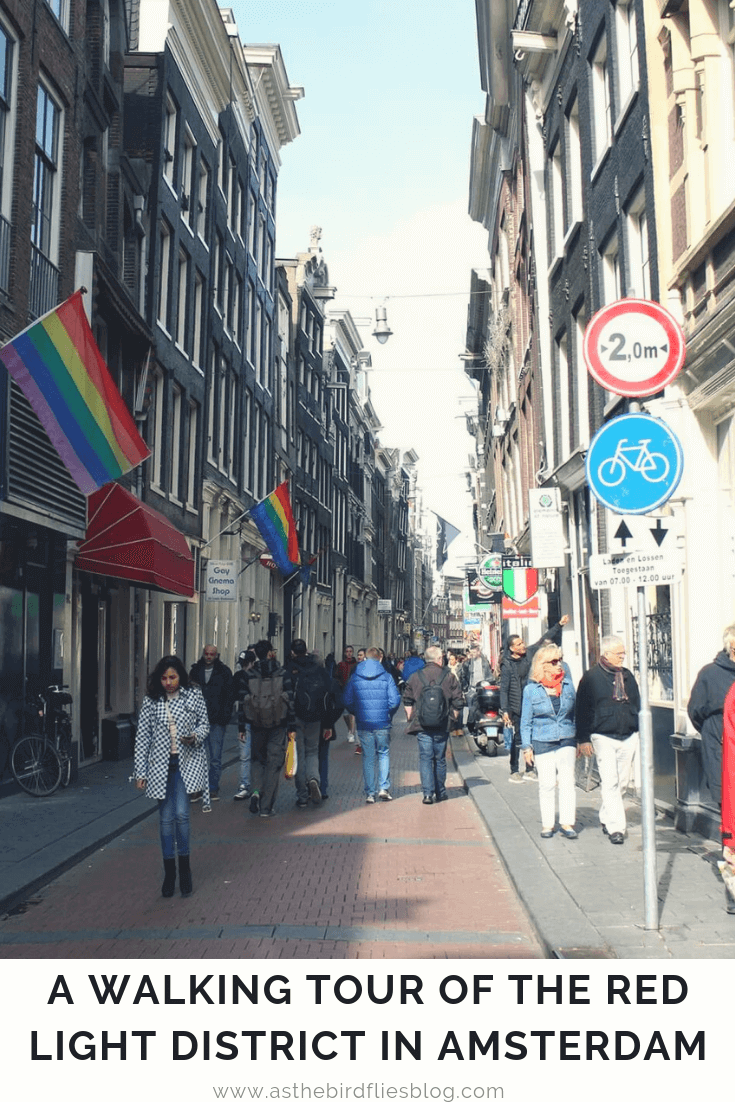 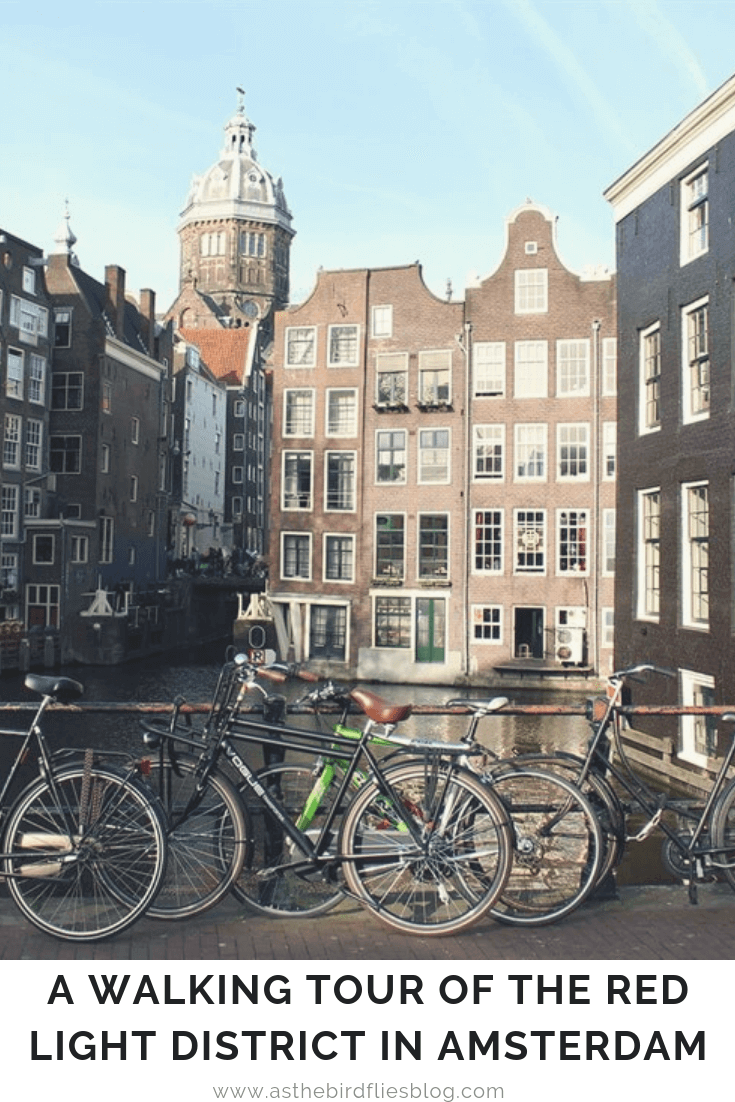 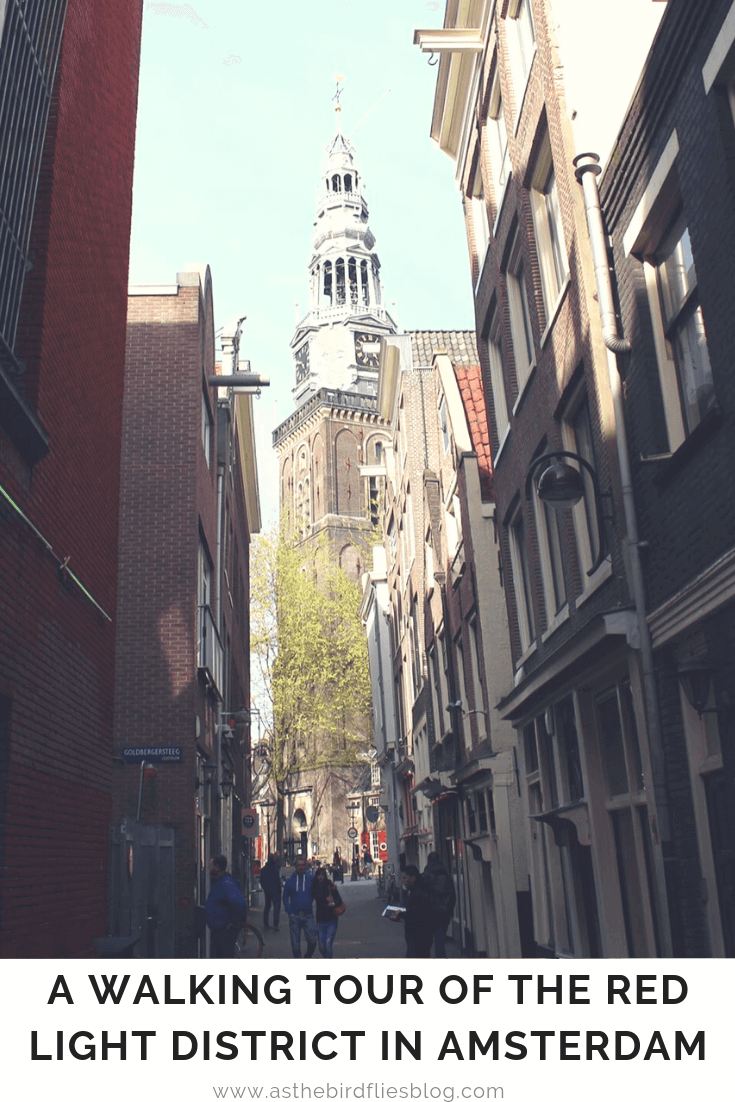 All photos by Frankie, except photo of the back of my head at top of Oude Kerk, snapped by Jan of Red Light District Tours.

Disclosure: I was invited to take part in a tour by Amsterdam's Red Light District Tours in exchange for an honest review, which this is. Yes, I'm a geek who loves Amsterdam and loves walking tours so it was not a hard sell, but I will say that the relaxed, fun and the inclusion of the weird and wonderful made this tour something I'll be recommending to friends... and therefore you too. They also do group tours but I personally think that if you're in a small group or a couple, the private tour could really be worth the money as you can ask lots of questions. Please note that the Oude Kerk tour will cost extra, and don't forget your €2 for your peep show!

You can find out more tips and advice for travel to Amsterdam in these posts:

Where to Stay in Amsterdam - A Neighbourhood Guide

Tips for Staying in Self-Catered Accommodation in Amsterdam

The Best Photography Spots in Amsterdam

Londoner turned wanderer, Frankie is an author, freelance writer and blogger. Currently based in Amsterdam, Frankie was nomadic for two years before starting a family with her Australian partner. Frankie is the author of three short story collections, and is a freelance writer for travel and creative brands. In 2017, she launched WriteNOW Cards, affirmation cards for writers that help build a productive and positive writing practice. When not writing contemporary fiction, Frankie shops for vintage clothes, dances to 70s disco music and chases her two young sons around Amsterdam.
Find Frankie on Facebook, Twitter, Instagram, Pinterest, and Google+.
AMSTERDAM TRAVELAMSTERDAMTRAVELEUROPETHE NETHERLANDS
Next
Amsterdam Travel: Neighbourhood Guide for De Pijp, Amsterdam

Previous
The Next Journey