Iceland Travel: How to See Puffins in Iceland

Migratory birds have it all.

The freedom to fly wherever they want and the natural programming to be nomadic, choosing their summer and winter homes according to what is best for their survival and that of future generations. They are the ultimate travellers and we should all be jealous, especially when you think about where they spend their time; summers in beautiful, remote Iceland, and winters in slightly warmer climes of North America (something that scientists didn't know until fairly recently!).  So how do you see puffins in Iceland during their summer holiday?

Where you can find puffins in Iceland

Puffins are migratory birds. They are beautifully colourful, wonderfully expressive and in the summer months around eight million of them like to descend upon the cliffs of Heimaey on the Westman Islands. That is where you will definitely find puffins in Iceland in summer months, specifically from mid-April to mid-August.

Hanging out with these seemingly easy-going birds was our reward after we climbed a volcano. It was a short drive away from the town of Heimaey and the views alone were worth the journey, but that wasn't e pulled up  quick stop on a cliffside where we crossed the path of bemused and angry sheep and crouched down to watch the puffins on their summer holidays.

Some sources say that the colony on the Westman Islands who come to breed during the warmer months, are among the largest in the world. This is good news for visitors hoping to catch a glimpse of them because there should be more than a few to satisfy this. We sought out the puffins back in June of 2013, when tourism in Iceland was on the trajectory but wasn't anything like on the same scale it is now (in 2018) so when we were on that cliffside of Heimaey in the Westman Islands we were the only group of people sitting down on the soft grass and admiring the puffins. I can't honestly say that the experience would be the same for you now. I would highly recommend going on an organised tour so you can visit the puffins in a respectful and safe manner (there are no fences stopping you get close to the edge of the sheer cliffside!).

The puffins seemed completely unperturbed by our presence and they mostly just stood still gazing out at the crashing waves rolling in beneath us. I took a lot of photos, it is true, but I also just spent some time crouching down and watching them, and also following their lead and looking out into the wild Atlantic ocean.

I've since learned that there is a special puffin observatory tower you can visit to take a proper look at the puffin colony, their activity, nests and even eggs, but we didn't do that, and in many ways I'm glad we didn't as my visit felt more authentic if a little more rugged, especially when the sheep who also chew the grass on those lush hilltops gave us fixed stares and slowly inched towards us...

Needless to say, however you choose to see the puffins, please do be respective of their natural habitat, both in terms of how close you get to them, and what you leave behind after you leave.

Anyway, back to the puffins, one of Iceland's most famous animals (and yes, it's true they do eat them though this practice has been curbed in recent years but that didn't stop me seeing it on several menus during my time in Iceland). Here are some of the photos I took. 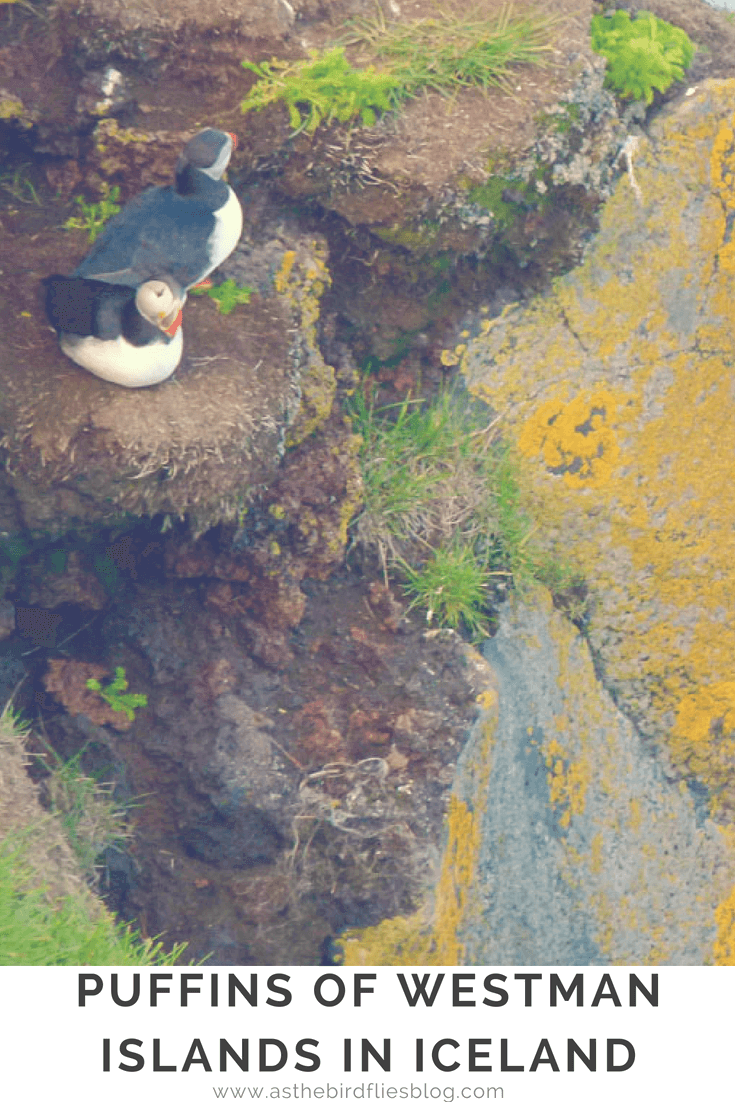 Londoner turned wanderer, Frankie is an author, freelance writer and blogger. Currently based in Amsterdam, Frankie was nomadic for two years before starting a family with her Australian partner. Frankie is the author of three short story collections, and is a freelance writer for travel and creative brands. In 2017, she launched WriteNOW Cards, affirmation cards for writers that help build a productive and positive writing practice. When not writing contemporary fiction, Frankie shops for vintage clothes, dances to 70s disco music and chases her two young sons around Amsterdam.
Find Frankie on Facebook, Twitter, Instagram, Pinterest, and Google+.
WESTMAN ISLANDSICELANDNATUREIN PHOTOSTRAVEL
Next
My Amsterdam Wishlist for Autumn 2013
Previous
Iceland Travel: Street Art in Heart Park, Reykjavik
Posts you may also like: