I recently attended NEXTCOMIC festival in Linz. It's one of only a few German language festivals dedicated to celebrating - and creating! - comic art.

I know very little about art and even less about comic art. But I know what I like, and I'm starting to learn what makes something worth standing in front of and looking at a little closer.
I knew I would learn athing or two at NEXTCOMIC but I wasn't sure what that would be... until now.

At NEXTCOMIC I learned the following:

That the purpose of NEXTCOMIC, which began in 2009, is to make art more accessible . So explained Christian Wellman, a Linz-born DJ and writer who was responsible for curating the exhibitions and events on offer at this year's festival. Clearly a little stressed and very preoccupied by the ongoing schedule of the festival's family day "Suuuper Sonntag", Christian took time out to show me around and explain why the event is as much about introducing new people to comic art as it is celebrating successful comic strip artists and illustrators from Austria and beyond.
That comic art has to be one of the most obvious, understandable and simple forms of storytelling and yet it's also prone to being the most intelligent with subtle details, clever captions and of course an interweaving of different skills being needed to have the most impact. 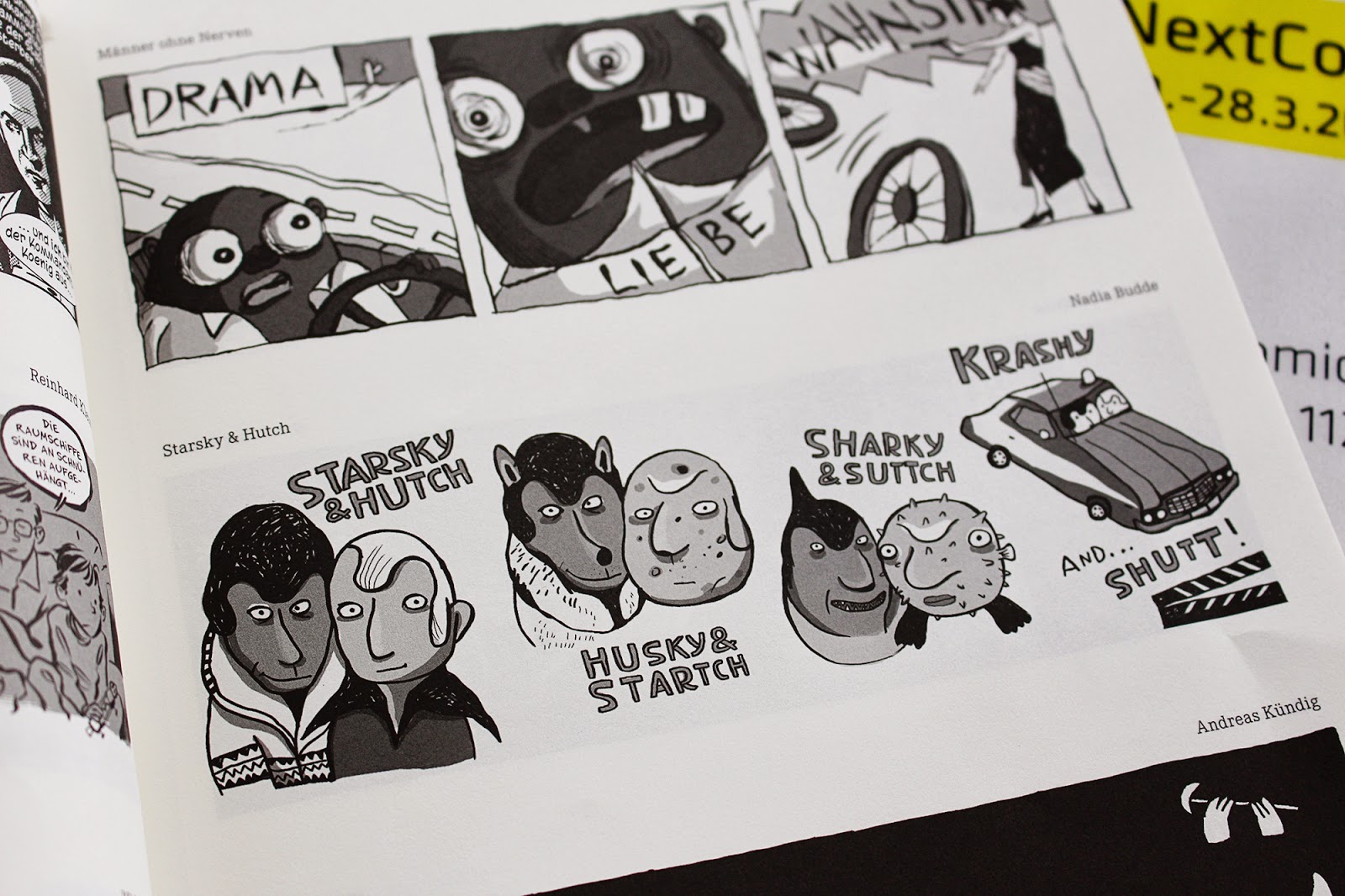 And connected to this, it follows that cartoons and comic art are many children's first exposure to stories and books. 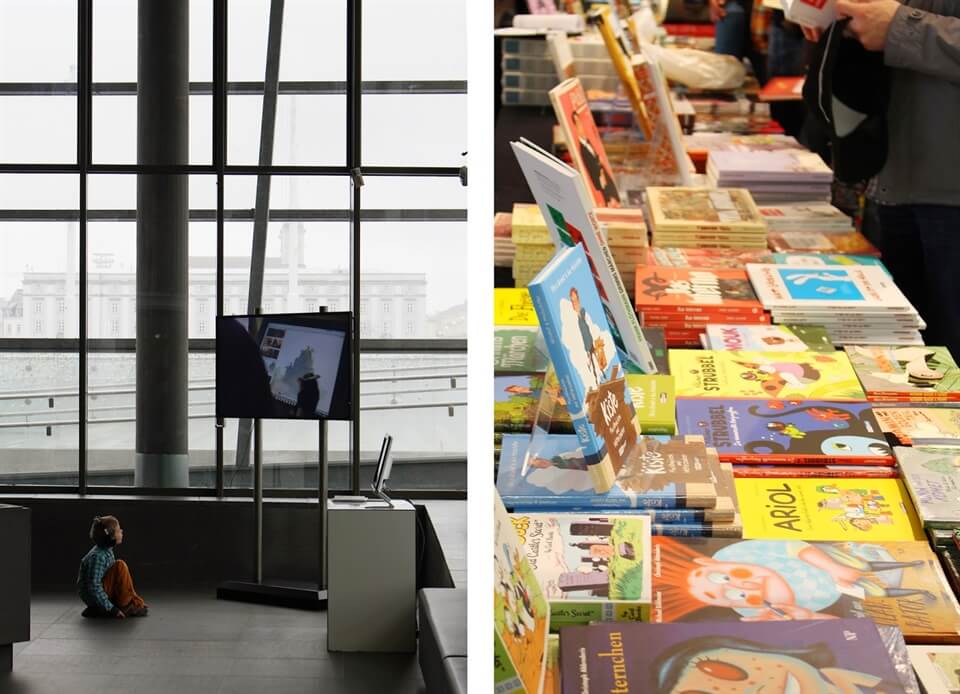 That there are many, many different types of comic art and their audience is just as varied . There are those who love the Japanese Manga comic books. There are those who celebrate and collect Marvel comics. There are those who admire the political and satirical comic strips that appear in newspapers and magazines - an art form that has been an essential part of modern media for over 100 years. And then there are those, like me, who think that they don't know much but then they see books like the Moomin series by Tove Janssen and some instantly recognisable drawings by Matt Groening and they find themselves going "Oooh!" as a sweet wave of recognition rushes in.
That the clue is in the name. Comic art is funny because it's supposed to be.
That I was strangely proud when I discovered one of the main "stars" of the show was a fellow Brit, Kyle Platts. And then I quickly learned that comic art is very, very cool. Platts' work has been featured in The Vice, New Yorker and on T-shirt designs commissioned by the Arctic Monkeys.
That many comic artists collaborate and this is something I'm very interested in. As a writer - arguably the loneliest creative profession - I'm very interested, if a little flumoxed by how artists and designers work together. In a typically non-artistic way I think I was approaching it the wrong way and trying to make it more complicated than it really is, imagining turbulent meetings in dark, smokey art studios. All it took was picking up a limited edition comic book called " Biografiktion: Abba" and I realised that it's as simple as pooling your talent. In this comic book three different strips tell (completely fictional) stories about Abba, each one different and each one complimenting the next.
That comic artists are unassuming, quiet and relatively ordinary. And they just want to draw . All the time.
That street art is possibly my favourite form of art, confirmed by this huge glass mural by Vienna street artist Nychos who is famous for his disembowelling of famous cartoon characters. I still loved it even though Ariel is my favourite of all the Disney "princesses".
That comic artists don't simply sign their work for you... they draw their signature. Of course! (Thank you Paul Paetzel for my very own Abba!)
That art takes many forms. Some of them are obvious, some of them are obnoxious, some of them are objective. And some are just an awesome storytelling combination of talent, humour and originality .
That I like comic art and will treasure this bookmark (by Ana Albero for Latvian comic anthology publishers  kuš).
That most children are natural artists. Give them a piece of paper, some pens and a little time and they will create something, anything and they will do so with a full heart and an undiluted focus. Could I say the same about adults, including myself? Probably not. Watching several groups of children throw themselves 100% into group and individual works of art was one of the most inspiring sights at NEXTCOMIC.
Which I think means that NEXTCOMIC  is achieving exactly what it has set out to do.

Londoner turned wanderer, Frankie is an author, freelance writer and blogger. Currently based in Amsterdam, Frankie was nomadic for two years before starting a family with her Australian partner. Frankie is the author of three short story collections, and is a freelance writer for travel and creative brands. In 2017, she launched WriteNOW Cards, affirmation cards for writers that help build a productive and positive writing practice. When not writing contemporary fiction, Frankie shops for vintage clothes, dances to 70s disco music and chases her two young sons around Amsterdam.
Find Frankie on Facebook, Twitter, Instagram, Pinterest, and Google+.
TRAVEL STORIESMUSTLOVEFESTIVALSLINZAUSTRIAEUROPETRAVELFESTIVALS
Next
Laughter is my Medicine at Altitude Festival
Previous
In photos: Flowers from Thailand
Posts you may also like: