Laughter is my Medicine at Altitude Festival 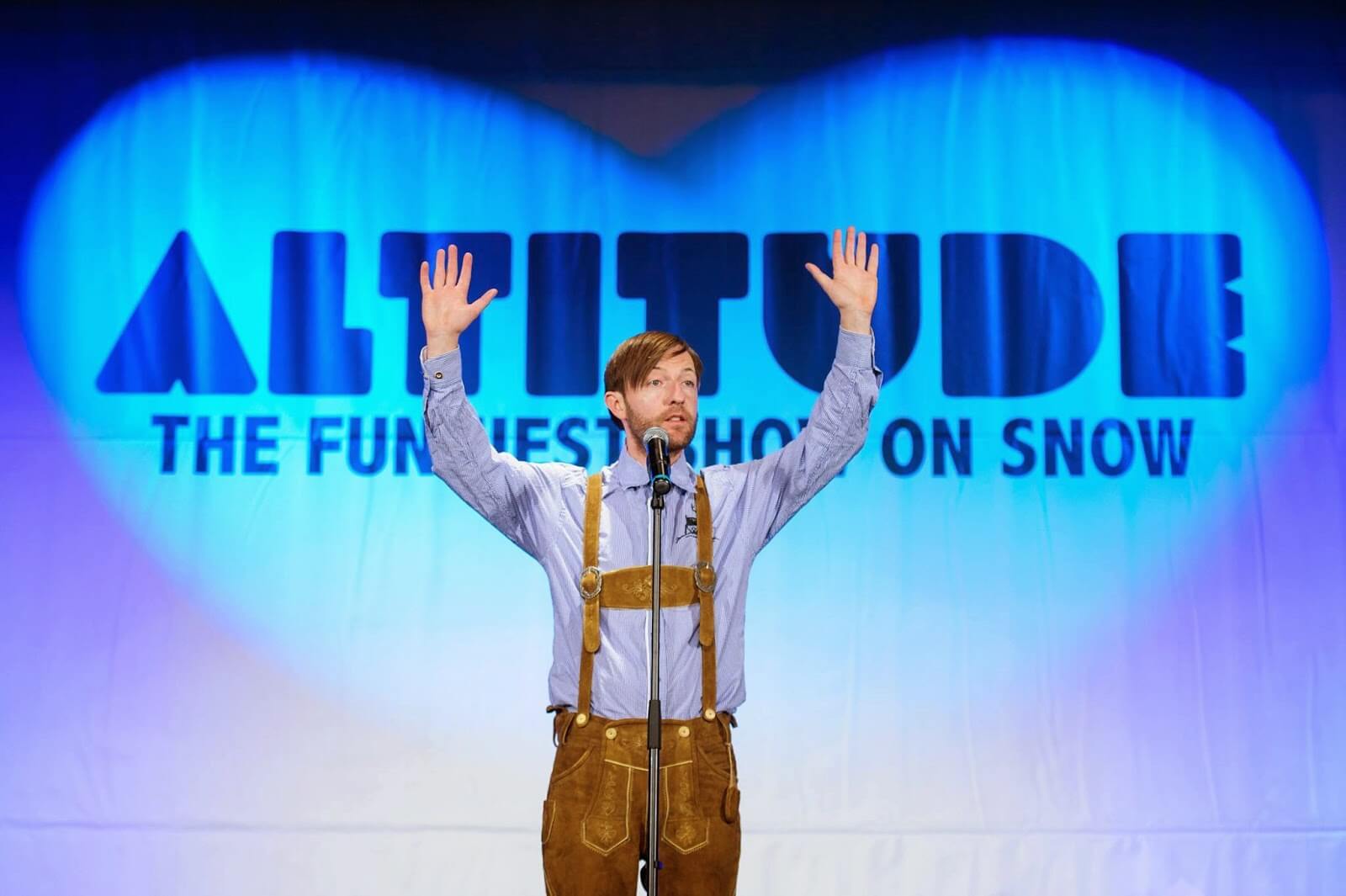 “Laughter and tears are both responses to frustration and exhaustion. I myself prefer to laugh, since there is less cleaning to do afterward.”  - Kurt Vonnegut

When you spend all day on your feet, on the snow, slip-sliding your way from a great height to a lower level, bending knees and stretching muscles, you start to feel things burn.

These muscles you use but once or twice a year - if you're lucky - are shocked into a slow burning ache as you push yourself, because the speed, the whoosh of the wind, the passing heaven-like views are all worth it.

That and the fact you're racing someone else to get to the bottom. And so on the first evening of Altitude Festival , with rosy red sunburnt cheeks and hot, sore legs, NewMan and I made our exhausted way through the village of Mayrhofen to watch the first Gala show of Altitude Comedy Festival begin. The Gala show is highlight of each evening with four different comics taking to the stage on each of the five nights that Altitude runs for. Not sure what to expect we walked into a large space full of long tables, each proudly boasting flower centrepieces and circled by chairs, all of which were occupied. Because we were a little late and the show had already begun, we kept to the back wall and found a corner to lean in, realising we were going to have to push our tired bodies just that bit further by standing all evening.

"We must get here earlier tomorrow!" NewMan berated me before I got the chance to blame him.

A moment later the tall and broad bouncer who had opened the auditorium door to us appeared with two chairs.

"Here you go," he said with a kind smile. By the end of the week we were calling him "The Nicest Bouncer in the World." Even before this I knew that it was a different kind of festival as in our hands we carried two drinks held in receptacles made of glass. Actual glass. I've been to big comedy nights in London and music festivals on the snow before, and neither one offered me a drink in an actual glass. It was a complete treat!

With bruised bottoms - an occupational hazard as a snowboarder - we sat down on our chairs that night and watched the show continue. It played out like a sea of laughter; I got swept away in a rolling rhythm of crescendos as chuckles exploded before teetering out into gentle bubbles of amusement only to rise up again into another wild wave of shared sheer delight. The following four days played out in the same way. We pushed our bodies to exhaustion by day and we soothed all our aches floating on that sea of laughter by night.

And what a long night of comedy it was beginning with the Apres Ski show at the bottom of the ski lift from 5 o'clock and continuing into the Late Show in a smaller, darker, more intimate venue until it was last comedian standing (normally in the early hours of the morning).

The people who made us laugh came in many different shapes and sizes though most hailed from the British Isles and Ireland. This not only gave me the warmest sense of homesickness, but it also made me awkwardly proud; we really are a comedy-obsessed and comedy-masterful race. 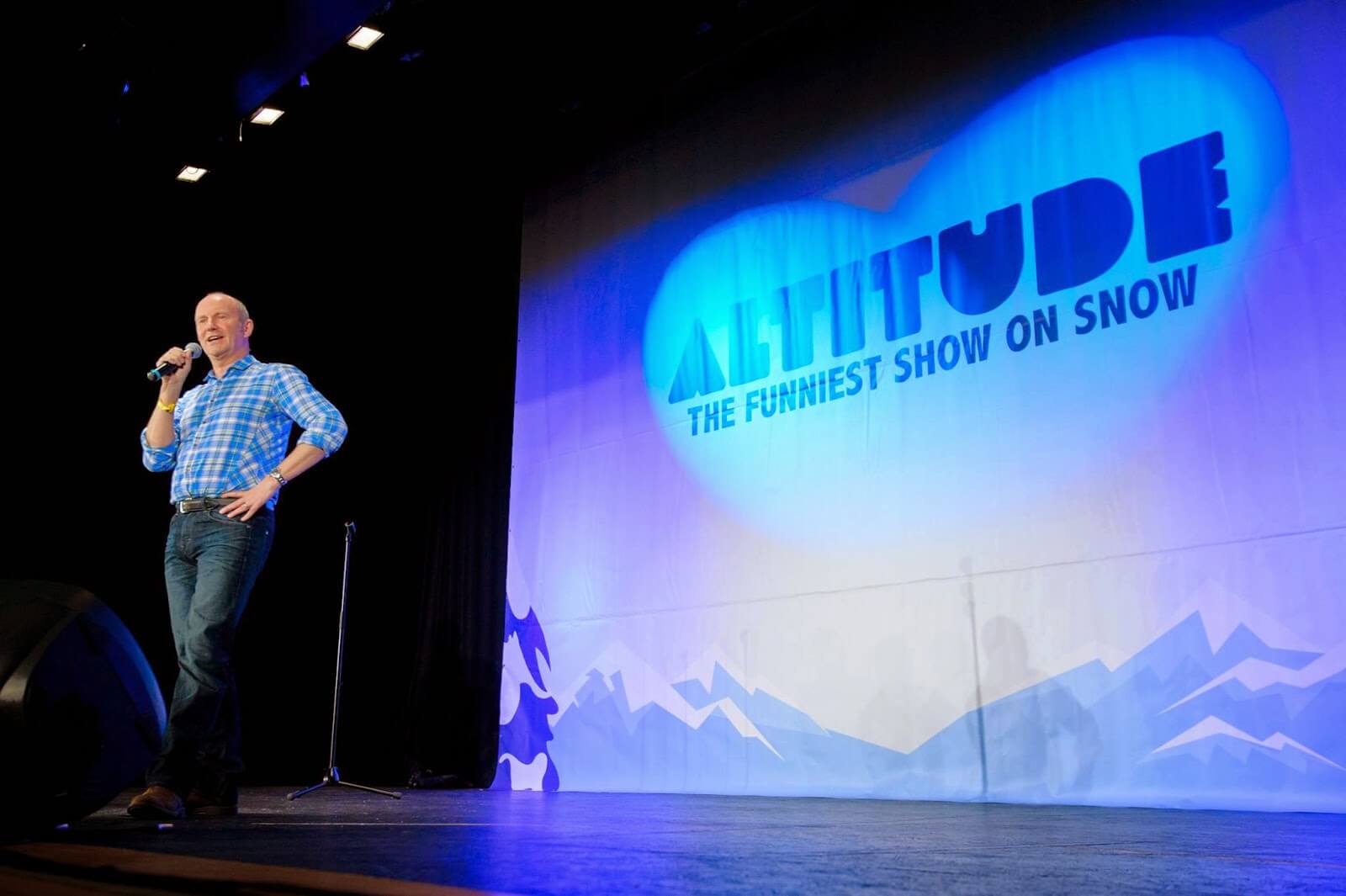 Each evening I sat down at one of those tables, with one of their glass glasses in my hand and with more pain in my tired snowboarding limbs and each night I went to sleep smiling. The pain in my legs was replaced by a happy ache in my stomach and in my cheeks caused by the mightiest of physical activities; laughing. Just before we left Mayrhofen I glanced in the mirror and saw a new collection of wrinkles break out from the corner of my eyes. I cursed them before realising what they were; laughter lines.

In no particular order my favourite acts were Nina Conti , (seriously - go see this man!), Daniel Sloss , , Zoe Lyons , , Joel Dommett and who is also co-founder of the festival. Oh, and many of those links are NSFW! The two headliners were and John Bishop , two acts I find funny but wouldn't go out of my way to see. Both charmed me into possibly changing that opinion after not only seeing their shows but enjoying how they interacted with everyone on the snow and in the village. Yes, Altitude Festival is that kind of festival, where the acts intermingle with the ticket buying public and do so in a way that is a credit to them. (And let me just add I'm the first person to diss a celebrity if I can!) The act of sharing laughter with someone is a special thing.

The sensation of sharing laughter with hundreds of strangers is just as special, but arguably much more powerful albeit, of course, in a completely different way. The latter was certainly the best possible medicine for my legs and Altitude Comedy Festival should be applauded for combining two things so many people love with so much passion and success. Tickets for next year are available now .

Londoner turned wanderer, Frankie is an author, freelance writer and blogger. Currently based in Amsterdam, Frankie was nomadic for two years before starting a family with her Australian partner. Frankie is the author of three short story collections, and is a freelance writer for travel and creative brands. In 2017, she launched WriteNOW Cards, affirmation cards for writers that help build a productive and positive writing practice. When not writing contemporary fiction, Frankie shops for vintage clothes, dances to 70s disco music and chases her two young sons around Amsterdam.
Find Frankie on Facebook, Twitter, Instagram, Pinterest, and Google+.
MAYRHOFENSNOWBOARDINGALTITUDE FESTIVALMUSTLOVEFESTIVALSAUSTRIASNOWFESTIVALSTRAVEL
Next
MusicMonday: Male Vocalists Playlist
Previous
My Books: Night Bus' Ten Unusual Influences
Posts you may also like: