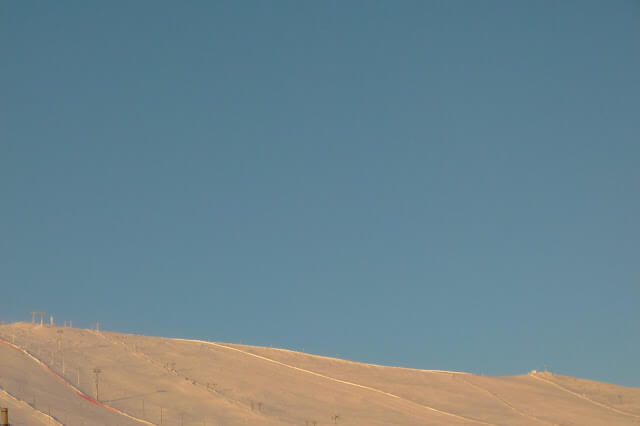 Never before, and quite possibly never again, will my first impressions of a place be defined by a naked sauna and ice dipping session with a group of jolly Finnish women I've never met before.

It was one of the most exhilarating experiences of my life. Particularly, perhaps, because I had such a false start with the naked sauna challenge before back in Amsterdam. I will elaborate on the shock of the ice dipping and the intense heat of the sauna another day because there are more things to say about my first impressions of Ylläs. However, needless to say "warm welcome" doesn't even begin to describe how wonderful a way it was to be invited to enjoy a new place.

We left Levi on Monday afternoon and as we drove the short distance between to Ylläs the sun was beginning to set. This is a dramatic and drawn out experience up here in Finnish Lapland and certainly adds to the magic of the landscape that I've nearly grown used to, though I definitely shouldn't. Our taxi followed a road purposefully carved through a snowy forest and NewMan and I fell into a comfortable silence as we processed the leaving of one place and the arrival at another.

I watched the world go by, or rather the trees, and I thought, not for the first time, about the generations that had survived these winters before electricity, before gas and before these tarmac roads that are so diligently kept drive-able. If you come here one day I'm sure you'll think about it too.  I assume it's thanks to the snow covered trees that they prospered as the timber they provided gave families the all-important shelter and warmth needed to survive these often frighteningly cold and dark months. Some of these trees hold familiar shapes in many ways; the snow that lands and sticks to branches, layer upon layer, adds human like character to them. NewMan must have noticed me watching them intently as our taxi sped along and he quietly said to the side of my head: "These trees were here long before us and they'll outlive us all,".

It was unexpectedly profound of him and in the strangest of ways I am glad he is right.

All thoughts of the old lives of trees and people gone before us were lost once we approached the bright lights of Ylläs' ski resort. The bright lights being the flood lights used to light up the pistes. Genius. Snowboarding by floodlight, aside from making you feel a bit famous and special, means that you are accompanied by your shadow as you descend. The number of times I've seen her out of the corner of my eye thinking she is someone sneaking up behind me... but no, it's just my sweet little shadow dancing with me and my snowboard on the snow. Like Levi,  Ylläs' skiable areas  hug the side of a "mountain". The inverted commas are for all those who are used to Alpine mountains, as Ylläs' peak is only 719 metres. I say "only" as we have learnt in the last 48 hours that this is enough height to provide for some really great long runs and the shape of Ylläs' seven fells allows for some beautiful wide pistes facing the bright, barely rising sun. It's a horizon against which I've never snowboarded towards before.

You'll be happy to know the scenery in  Ylläs  suits my "I Love Lapland" playlist perfectly. The climate in Lapland, of course, means guaranteed snow a quality most Alpine resorts would (and do!) pay good money for. If you'd like to know more about the history of skiing in Ylläs I recommend a quick read of this as it paints quite a picture - can you imagine a ski lift powered by VW car engines? Down on firmer ground, albeit just as snowy, we are staying on the Ylläsjärvi side of the ski area and we are grateful as we are less than 100 metres from the main gondola lift to the top with a few pubs lining our journey. The other settlement where most tourists stay is  Äkäslompolo, the larger and more traditional village. It is only a couple of kilometres from  Ylläsjärvi as the bird flies, but as I found out when this Bird went there for her sauna you actually have to travel around 16km in total as there is a much treasured national park defining where the road goes. The locals call this road "The Scenic Route" because idiomatically and literally this is what you are taking. It's hard not to like this.Again, the friendliness and willingness to help of those who work here has brightened our first few days settling in and we've also found out that the pub at the bottom of the slope, Pikku Berliini, serves delicious pizzas and affordable beer.

On our first night in the afore mentioned home of delicious pizzas, I met two kind Finnish ladies who are visiting Ylläs from Helsinki working on a TV production called "Ylläs - huipulla tuulee" , which roughly means "Ylläs: It's windy up top". It's a reality TV show, similar to The Only Way is Essex for my UK readers and The Hills for my US/International followers.

In Finnish there is a double meaning too as "it's windy up top"refers both to the fact that Ylläs is prone to windy weather but also it's an idiomatic expression used to describe uncertainty and the show's focus on how those who live and work in Ylläs rely on the winter season to bring in enough money to last the year plays on this. I'm glad that I learned this as it has made my visit to Ylläs a little bit more real. You realise that your ski holiday is part of someone else's livelihood.And yes, it can be astonishingly windy on the top. While this isn't the most uncomfortable of ice cold gusts, and once you're wrapped up in the right clothes, it's hardly noticeable. What's more special is that  it forces the top dusting of snow to rise up and dance around the pistes creating a mini white sand storm to slice through on your board. It's pretty spectacular. I also met one of the TV show's stars, Eeva ("Seriously, everyone wants her autograph," the producer told me as Eeva scoffed at her fame). Eeva spoke wickedly brilliant English and teased me about my ice dipping experience - "You know you have to swim to the other side? It's only about 100 metres...". She owns the pub that serves delicious pizzas and she made me promise to pop in regularly. I like to keep my promises... and I like to eat delicious pizza.

Yes, Ylläs, I think we're going to get a long just great.

Londoner turned wanderer, Frankie is an author, freelance writer and blogger. Currently based in Amsterdam, Frankie was nomadic for two years before putting down some roots with her Australian partner and having a baby boy in July 2015. In 2017, she launched WriteNOW Cards, affirmation cards for writers that help build a productive and positive writing practice. When not writing contemporary fiction, Frankie shops for vintage clothes, dances to 70s disco music and chases her son around Amsterdam.
Find Frankie on Facebook, Twitter, Instagram, Pinterest, and Google+.
SNOWBOARDINGFINLANDYLLÄSSNOWLAPLANDFIRST IMPRESSIONSTRAVEL
Next
MusicMonday: Little Birdie by Kossoy Sisters
Previous
One photo a day: February 2013
Posts you may also like: