This is a post about a visit to Sauna Deco in Amsterdam. Maybe you'd like more general posts about Amsterdam, like some free things to do in Amsterdam, a guide to where to stay during your visit to Amsterdam, or even some cycling tips for getting around the city on a bike (uninjured!). You can read all of my Amsterdam Travel Advice posts here.

My first visit to a unisex sauna: Sauna Deco in Amsterdam

The email I was waiting for confirming the upcoming press trip's itinerary plopped into my inbox. Just like email notifications of comments on my blog and confirmation of client payment emails, I clicked it open eagerly and immediately to see what was in store for me. A shopping tour (hmm interesting...), a high tea (yum!), Madonna concert (OMFGG!) and a Sauna... "which will be unisex, I hope that's ok?" . Sure! I can cope sharing a sauna with men. I'm no longer five, I know what they look like naked and that they don't really have fleas or smell that bad. Well, not all the time.

Fast forward a week or so and it was the Last Supper on the Night Before the Unisex Sauna and the organisers, HouseTrip were explaining to us that this city spa is a very special place. Sauna Deco is so-called because it is all kitted out in beautiful art deco furnishings and finishings, which were rescued from the defunct Parisian department store  "Au Bon March é "  and transported from Paris to the canals of Amsterdam. Being an art deco junkie I was suddenly full of excitement at the prospect of experiencing a sauna and spa from a time gone by, especially as I've recently had my hair coiffed into a 1920s flapper style bob. As I sipped the last of my white wine I daydreamed about how my bob and I would lounge around surrounded by gold curves and art deco statues. I'd just about convinced myself it would be just like an episode of Boardwalk Empire when my fellow Brit and HouseTrip representative leaned over to me and said.

"You're ok with being naked then?"

"Tomorrow in the sauna?"

Suddenly my flapper style bob was less of an accidental glamorous accessory and more of a co-conspirator for full on exposure and embarrassment tomorrow.

And here is one of the few times when Britain stands out from Europe, turning into the prudish Great Aunt of a group of young, modern, future-thinking, liberal and often naked Europe because of  course this is normal in Europe. It's just still quite unusual in Britain.

Strangely though, it's not unusual to me. I've done the naked sauna thing before thanks to a ski season in Austria nearly ten years ago, but that was with the people I'd cleaned toilets and shared stinking hangovers at breakfast service with so we were close friends who could giggle our way through our perky and pert nakedness. Plus, cold aching muscles will make you quickly forget that you have all your nooks and crannies on show.

This was a little more awkward seeing as the context would be much more professional. I would be joined by three fellow female travel writers - one fellow blogger (the wonderful) Yvonne from JustTravelous and two seemingly sweet German journalists that I was yet to speak to.

Three months of living in Amsterdam has certainly opened my mind and nine months travelling has made me very open to being... er, more open and I was determined to honour this. I quickly explained that I was totally fine with it and internally reassured myself that I would be come sauna o'clock the following day.

After a surprisingly exhausting shopping tour around Amsterdam's Jordaan area we arrived at Sauna Deco and all I could think about was the massage that had also been organised for me. I certainly didn't mind getting naked for that or flashing the lovely masseur more than a few times as she worked away a number of knots in my back and neck.

Afterwards, each cloaked in a soft towelling robe, Yvonne and I took advantage of there not being many other guests and we photographed as much of the stunning art deco as we could. As I was leaning back taking a photo of the corridor, a door opened and I saw a naked man and his very pleasant pert bottom popped out of the sauna. I quickly lowered my camera and a rush of cold heat came over me; I realised uncomfortably that I was only minutes away from de-robing and I was suddenly panicked.

I'd now got to the point where I was making a big deal out of something that actually wasn't a big deal to me. I know I haven't got the best body in the world but it's mine and after thirty years of not being sure about it, I'm starting to quite like the physical sum of my parts. However, when you start to worry about something I think you get to a stage where you're worry isn't grounded and as you're flapping around up in the sky somewhere you actually lose sight of what you're worrying about. As I watched that pert bottom walk into the showers, I tried to snap myself out of my flap and think about how nice it would be to be in a sauna.

"Frankie, I'm going to have a cigarette. Are you coming?" Yvonne asked and pulled my gaze off of that poor gentleman's behind.

Tucked away in Sauna Deco is a small courtyard garden with soft loungers and chairs. The sun was shining directly above us, Yvonne lit a cigarette and I sat next to her and we started to talk. And we talked and talked and talked. We talked about our jobs, about blogging, about travelling, about boys and about nothing whatsoever. It was therapeutic in a way that maybe a sauna, naked or not, could achieve. Suddenly it was ten minutes before we were due to leave and so we raced to the changing rooms to get dressed. As I pulled my clothes on I felt suddenly sad that I hadn't gone the full hog, or rather the full monty. It was a strange feeling a little disappointment in myself mixed with a little regret and an inexplicably large "what if?". It would have been so liberating to have just conquered my fear...

But I suppose as my travels in Europe continue there will be other saunas and there will be other opportunities to get naked, though forgive me if I consider growing my hair to a conservative Lady Godiva-esque cover-up length... I am British after all. 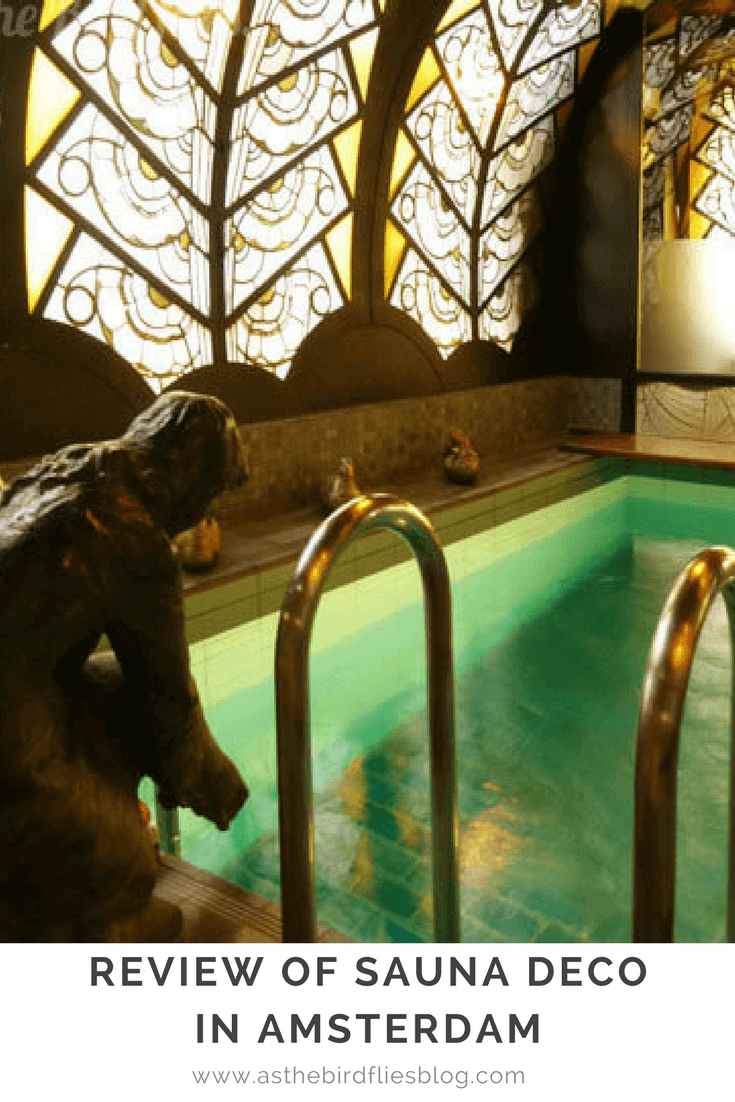 Disclosure: Bird was a guest at Sauna Deco thanks to HouseTrip who arranged an excellent mostly fully-clothed itinerary for us. My British awkwardness and slightly unhealthy obsession with one man's bottom is all my own doing and something I should maybe seek help for.

Londoner turned wanderer, Frankie is an author, freelance writer and blogger. Currently based in Amsterdam, Frankie was nomadic for two years before starting a family with her Australian partner. Frankie is the author of three short story collections, and is a freelance writer for travel and creative brands. In 2017, she launched WriteNOW Cards, affirmation cards for writers that help build a productive and positive writing practice. When not writing contemporary fiction, Frankie shops for vintage clothes, dances to 70s disco music and chases her two young sons around Amsterdam.
Find Frankie on Facebook, Twitter, Instagram, Pinterest, and Google+.
TRAVELTHE NETHERLANDSAMSTERDAMTRAVEL STORIES
Next
in photos: Road Tripping in Europe
Previous
Wednesday's Words: Have no fear...
Posts you may also like: