My first conversation on South African soil was with a man from the car hire company, still at the airport. He was smiley, had bright eyes and joked with us, adding an unnecessary but kind "Sir" or a "Maam" to the end of his sentences. It was nearing midnight and I admired his up-beatness for that time of the night. He made me feel welcome.

As we pushed our loaded trolley of luggage up to our car hire - a basic silver VW Polo - we walked past two lone security guards patrolling the rows of cars. They were dressed in big jackets and wore woolly winter hats pulled over their ears. Meanwhile, we had taken off our jackets and were enjoying the jump of nearly 20 degrees compared with our departure point in Amsterdam.

Once at our car, it took us no less than five minutes to figure out how to unlock the car. Pushing the unlock button once only prompted a beeping noise and it was only by pressing it twice in quick succession that we were able to open the doors. After we drove away the doors automatically locked again.

The security guards and the additional security pre-programmed into the hire car is representative of the extra measures you are recommended to take at certain times and in certain places in Cape Town. While I was reminded of these precautions and the risks they protect against - "Don't walk alone after dark" and "Don't leave belongings in your car" was just some of the advice given - I did not witness any crime or even remotely threatening behaviour during my ten days in Cape Town, and I didn't exactly hide away for that time. I drove around the city A LOT, sometimes alone, often after dark, and once I'd figured out where I was going, and that mastering a hill start is essential, I felt comfortable and confident.

Good. That's that all discussed. It's important part of travelling in South Africa (as also highlighted in this fantastic and incredibly thorough post on having a honeymoon in South Africa by my good friend Victoria) but it's not the only thing you should know about travel in the country, and specifically in Cape Town. So now let us move on to more pleasant smelling topics. These are my first impressions of Cape Town. This is what Cape Town was really like... for me.

Cape Town, you are beautiful.

Your beauty comes from nature, mostly, thanks to the regally dominating Table Mountain behind you and the wild, colourful coastline hugging you from all other angles. Not being an enormous city, it feels like there's almost too much variety in your limited landscape, which of course is best seen from the summit of Table Mountain.

And when we left the city limits to spend the weekend in Franschhoek wine region for a friend's wedding - the real reason we were in Cape Town - we quickly realised how much this variation just spreads and isn't diluted in any way, shape or form.

Cape Town, you are wild.

So no, there weren't elephants and lions walking around your streets, but there were seals swimming very happily around the V&A Waterfront's waters, hauling their fat bulks onto a jetty where they could sunbathe, less than a hundred metres from where the gym in our apartment complex was. Watching them relax as I worked up a sweat was strangely effective.

And then there were the African penguins at Boulders Beach - hundreds of them - and just a few hours before we'd been in the National Park at Cape Point where a baboon had crawled past our car, a ball-of-fluff-like baby clinging to its underside, and a few moments later we made out the statuesque long-reaching neck of an ostrich standing atop a sand dune, again less than a hundred metres away.

We didn't go out to find these creatures, we stumbled upon them. Imagine what we could have seen had  we actively searched for more wildlife.

Cape Town, you are diverse.

Proudly portraying itself as the "Rainbow Nation", South Africans are very obviously a diverse people. Yes, I say this in relation to the innumerable skin colours you see, but also the voices. It blows my mind that there are eleven official languages of South Africa and it's very possible that my ears heard most of them as I moved around Cape Town. While English dominates in the most business- and tourist-focused areas, out in the wine region Afrikaans took over and thanks to my limited knowledge of Dutch I was able to pick out familiar sounds and words. The rest was utterly foreign, and although I felt sad not even knowing how to say "thank you", I applauded the aural diversity.

Of course, it's impossible not to notice that there are discrepancies in the diversity - the Big Issue sellers at "robots" (see below) were all black - but to focus on this would do the South African people a disservice and would also inaccurately give you the impression that I know enough about this issue in a country with a not-so-distant painful past.

Cape Town (or rather, South Africa), you have some funny words.

I wish we called traffic lights "robots" too.

And I love how "just now" means "sometime in the future".

Cape Town, you are flipping windy.

We were advised by the bride and groom to bring warm layers in case the winds blew and boy, I was grateful I listened to them. On one evening, when we headed over to Camps Bay for dinner with other wedding guests, 60 km/h winds battered our car windows and stopped us in our tracks as we walked to the restaurant. The wind was also responsible for no fewer than three failed attempts to get on the cable car and head up to the top of Table Mountain (my best advice is to go up early in the morning!).

Oh and always tie your hair back, though even that sometimes doesn't quite work.

Cape Town, you are very affordable.

Now I know this is not good news for South Africans, who were quick to bemoan how expensive it is to travel abroad, but we were very pleasantly surprised to find out how far our money went. For our first lunch, our Cape Town-born friend (whose wedding we were there to attend) took us to Takumi, a sushi restaurant, where we ordered enough sushi for six people, but we were just three. The bill still came to less than €20 per person (including drinks).

Oh, and Cape Town restaurants are very happy to offer you doggy bags or even have you order takeaway; certainly more so than my experience of restaurants in London and Amsterdam. I'm not sure why this memory stuck in my mind... maybe because we did a lot of eating in Cape Town.

Cape Town, you are a work in progress.

Before I get into this, I need to state with conviction that I believe ALL cities are works in progress. It just struck me as more obvious in Cape Town due to being surrounded by building work in the V&A Waterfront area where we stayed. Aside from scattered roadworks and minor building projects, the main construction site there was an old grain silo that is being converted into Africa's first national modern art museum.

We also saw a number of unfinished motorway bridges. Their suddenly-ending lids ominously hanging in mid air, we were told by our Capetonian friend that they have been like that for decades, becoming abandoned due to a lack of resources in 1977. While they're now used for movie sets, last year there were rumours they may actually be used or finished by the city.

Cape Town, you don't realise how special you are.

Let's be honest now. You are not an easy - or cheap - destination to get to. You're not a city that people "stop off" at on the way to somewhere else. In some ways, you're the dead-end of Africa, though there is nothing "dead" about you. And yet, visitor numbers are on the increase. You need to take a moment to understand this. Tens of thousands of people choose to visit you every month. Hundreds of thousands in the summer months. The key word in this sentence is choose. People choose to visit you.

And I'm so glad that I was one of them.

You can read more of my Cape Town posts about a street art tour in Woodstock, about the V&A Waterfront area and about seeing the penguins at Boulders Beach. Or you can read this great list of things to do in Cape Town. 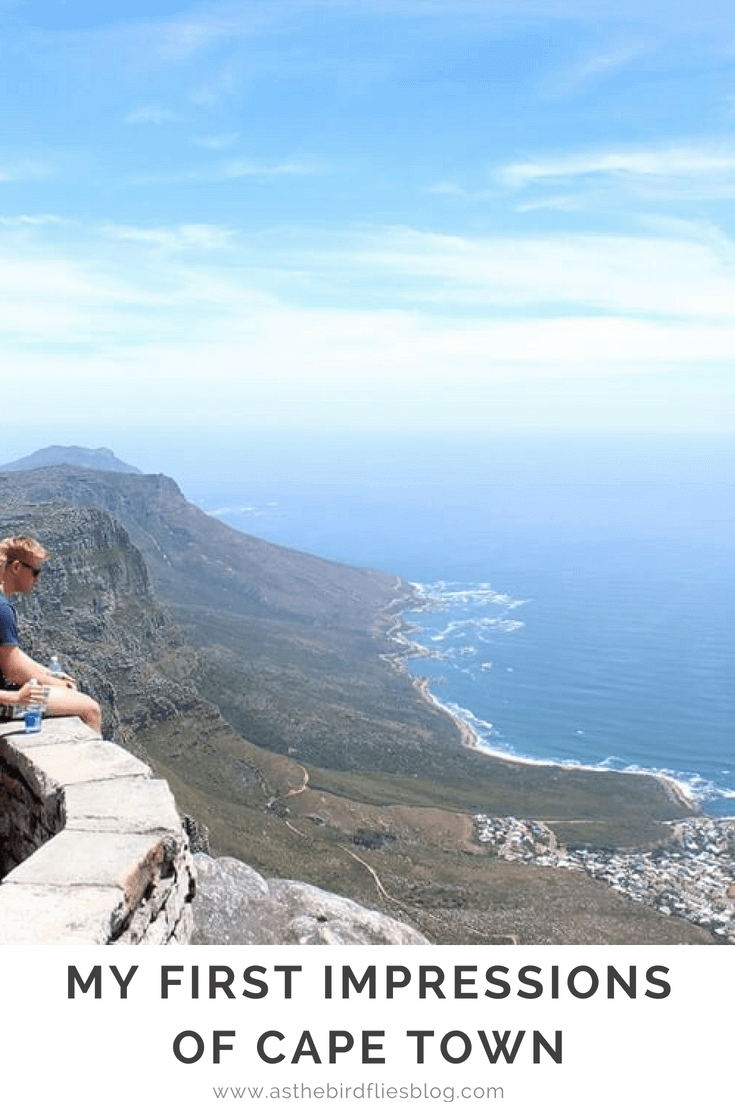 Londoner turned wanderer, Frankie is an author, freelance writer and blogger. Currently based in Amsterdam, Frankie was nomadic for two years before starting a family with her Australian partner. Frankie is the author of three short story collections, and is a freelance writer for travel and creative brands. In 2017, she launched WriteNOW Cards, affirmation cards for writers that help build a productive and positive writing practice. When not writing contemporary fiction, Frankie shops for vintage clothes, dances to 70s disco music and chases her two young sons around Amsterdam.
Find Frankie on Facebook, Twitter, Instagram, Pinterest, and Google+.
CAPE TOWNSOUTH AFRICAFIRST IMPRESSIONSTRAVEL
Next
London Eyes: Short Stories is now available as a paperback!
Previous
Words from my Stories: Homes from Homes
Posts you may also like: