"Lisbon is the perfect destination for a girl's weekend." Said Frankie a lot since returning from a long weekend in Lisbon, the Portuguese capital city, with two of my best friends.

This post and all its photos will explain to you why Lisbon is great for a girls' weekends. You can also use it as a little Lisbon city guide to help you get the most out of your stay.

Where we stayed in Lisbon

We stayed in the Bairro Alto district, which is neatly next to Chiado, Baixa and also walking distance from the waterfront and Cais do Sodre train station. Although the nightlife that the area is famous for did make for noisy nights, especially in the July heat when you need your windows open, it was manageable for a few nights once you hada pair of earplugs in and a few glasses of wine inside you.

We arrived late and spent more than a few minutes just wondering around the cobbled streets nearest to our apartment, which we found on HomeAway.co.uk. If you're on a budget you can also check out this list of the best hostels in Lisbon.

Eventually we found a wine bar and shared a bottle of something sparkling. Then we talked about going to get dinner but in the end headed home at around midnight, feeling a little old as this was precisely when everyone else was just heading out. We blamed it on flying, and not our age.

A Day Walking around the City

The following morning we found a cheap and cheerful bakery to have breakfast and we planned out our day.

Which didn't take long, because the itinerary went something a little like this; "Let's just walk around. Maybe go to Tourist Information to get a map. Oh, and we could walk up to the castle."

And as uneventful as that may sound, that's what we did; and it pretty much made for a perfect day. We didn't even go inside the Castelo de São Jorge, we just wandered around the old streets that surround it.

After our climb to the top of the castle, we stopped at Portas do Sol to admire the view and share a bottle of vinho verde.

Then we hopped on an old vintage tram because they looked so pretty, but we didn't get very far as a broken down one ahead meant we couldn't get by, so we got off and walked the rest of the way under a hot, hot sun.

By the time we were closing in our apaprtment, we were feeling a little peckish so based on a recommendation by my sweet Portuguese friend Sofia, we headed off to Mercado da Ribeira. Then we headed back to our apartment for a cup of tea, via a few grocery shops on the way home.

That night we were eager to try Portuguese food while listening to Fado music - when in Lisbon! - so we left our apartment ready to take on the mission of finding somewhere special. After doing a quick tour of the neighbourhood we returned to a place where a man was juggling outside. Inside we heard the lingering sounds of a male fado singer. We asked a waiter wearing cargo shorts and frilly apron (much to our delight) if they had a table for three. They did and what followed was my favourite night of our holiday. Three hours later we left grinning from an evening of good food, good music and good giggles. I HIGHLY recommend you spend an evening at Patio do Bairro.

A Day Trip to Cascais

We chose Lisbon as our city break destination because we wanted easy access to the beach for a little relaxation one day. Almost by accident, it couldn't have been easier. From our apartment we strolled down the hill to Cais do Sodre station and using our Lisbon Cards got on one of the coastal trains that took us to Cascais. Find out what else you can do in Cascais in this post.

Lisbon Card - Is it worth it?

While at the Tourist Information - which is next to a great little shop with lots of locally made goods and souvenirs - we actually decided to go for a Lisbon Card, which cost €39,00 and covered entry to a number of sights and museums, free public transport and money off other shops, restaurants and attractions for 72 hours. You can also buy one for a shorter time period. I'm not honestly sure if we got our money's worth, but it certainly made travelling around a lot easier, especially hopping on the trams and getting the train out to Cascais. Even though I'm a seasoned traveller, I don't know why, but I always panic a bit about buying tickets for trains, trams and buses in foreign countries. I seem to be most excellent at over-paying, asking for the wrong thing, or simply losing them.

You can also use your Lisbon Card to get to Sintra to see all the beautiful castles out there. Here are some more tips for getting to Sintra from Lisbon.

We spent the evenings we had left exploring Bairro Alto and trying to find cheap and cheerful places to eat and drink. This is not a difficult thing to do. I could list the places we went to but to be honest, that would spoil half your fun.

A walk around Belém

The main reason we wanted to visit Belém was for the famous Pasteis de Belém, of course, but while we were there we admired the impressive Mosteiro dos Jerónimos from afar, stood by the waterfall in its gardens (as we really needed cooling down!) and then walked along the waterfront from the Padrão dos Descobrimentos (Discoveries Monument).

We ended our walk with gelato from a nearby cafe before jumping on the train back home. It wasn't an eventful afternoon but it was one of our favourite slow-paced few hours together.

One of my favourite evenings was watching the sunset from the top of Bairro Alto in a small square and gardens called Jardim de São Pedro de Alcântara, We came armed with a bottle of wine, a family packet of crisps and some homemade guacamole (my friend Cat is a genius to have made this in a jar using a technique that involved more cocktail style shaking than anything).

We already knew we wouldn't be facing the sun itself, in fact it was setting directly behind us, but that wasn't the point. It's enough of a view to watch the fading light change the colour of Lisbon's rolling hills full of buildings, from bright white to dusky pink.

And then the supermoon made an appearance, just popping its head around the corner of Castelo de São Jorge

The other things we did in Lisbon

Drank a lot of coffee.... (For a list of good places to drink coffee in Lisbon check out this post.)

Wrote postcards to people at home.

Drank a lot of tea.

Laughed at how our apartment had a "see-through" glazed glass door.

Discovered a book market in Chiado on a Saturday morning.

Marvelled at both how old and how young we felt, often within the same hour.

Thought about going to Sintra to look at all the pretty palaces but decided it was too hot and too nice just to stroll around together. (If you did want to do that, here's are some tips for getting to Sintra.)

Put the world to rights several times over.

And if you want more inspiration here are some more tips for travelling to Lisbon and a post all about what Lisbon is known for. Had we had more time I would have also made us head to see Cabo da Roca as I remember only too clearly how beautiful it was. 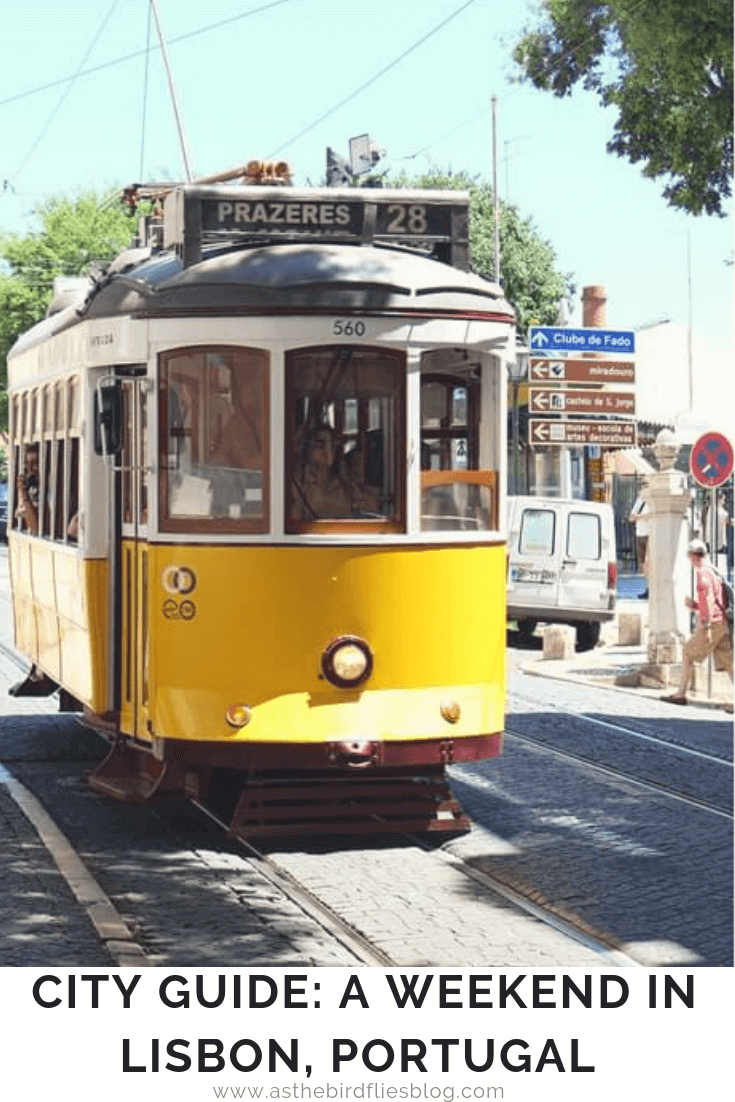 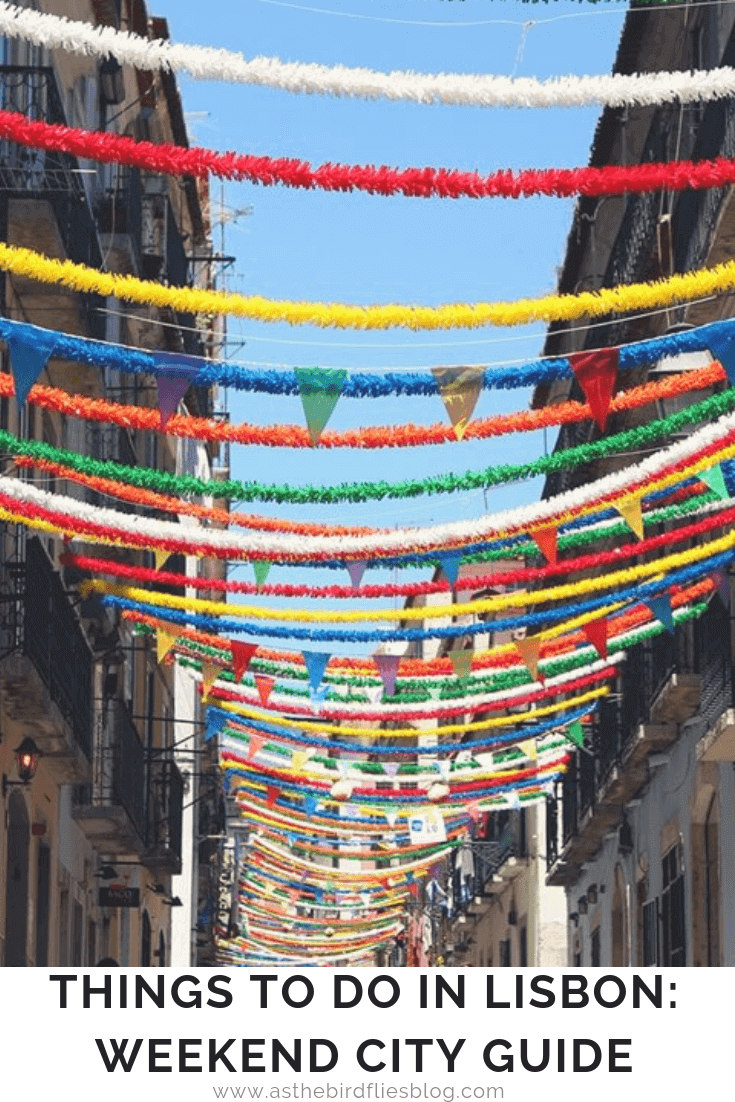 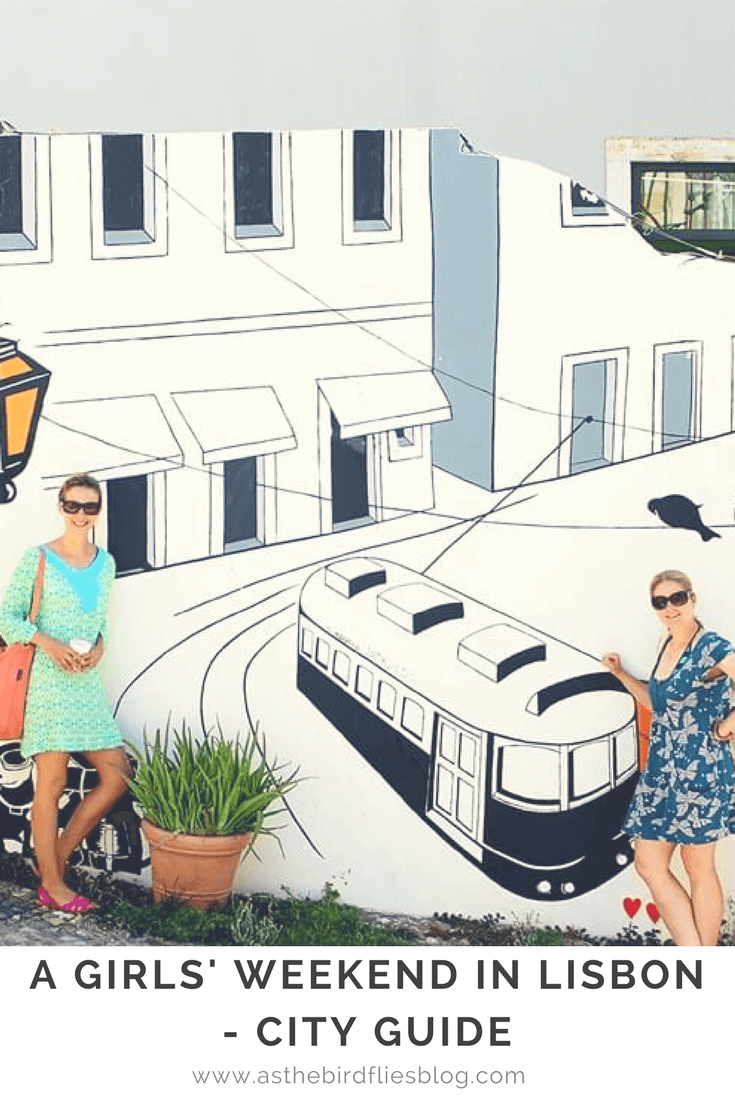 We stayed in Lisbon with HomeAway.co.uk in a bargain-priced no frills but did-the-job apartment in Bairro Alto.

Londoner turned wanderer, Frankie is an author, freelance writer and blogger. Currently based in Amsterdam, Frankie was nomadic for two years before putting down some roots with her Australian partner and having a baby boy in July 2015. In 2017, she launched WriteNOW Cards, affirmation cards for writers that help build a productive and positive writing practice. When not writing contemporary fiction, Frankie shops for vintage clothes, dances to 70s disco music and chases her son around Amsterdam.
Find Frankie on Facebook, Twitter, Instagram, Pinterest, and Google+.
LISBONTRAVELEUROPEPORTUGALCITY GUIDE
Next
Travel: Vintage Shopping in Ljubljana
Previous
Travel: Ljubljana's Open Kitchen Food Market
Posts you may also like: