Lisbon's Mercado da Ribeira, an indoor food market with cuisine from all over the world and a funky interior to host tourists from all over the world, had just opened when we went to check it out. But just stepping inside I realised it won't stay quiet for long. The over-bearing Time Out Lisboa branding told me that much.

But if you're going to Lisbon, the Mercado da Ribeira is worth adding to your list of places to go. Especially, if you're hungry. It was certainly a highlight of our recent girls' weekend in Lisbon.

Found a short walk from Cais do Sodré train station and at the bottom of the hill that climbs up into the Chiado and Bairro Alto areas of Lisbon, Mercado da Ribeira is Lisbon's largest covered market though the "market" you see today is a very different version of what has gone before. Now separated into two sections, part of Mercado da Ribeira are reserved for what the glass-roofed hall was built for in 1892, buying fresh vegetables, fruits, fish and meats (as seen here) but the biggest space has been taken over by a new food court area, sponsored, and apparently owned. by Time Out Lisboa.

With rows of sharp-cornered, light-wood tables and stools spread out at one end and an empty space in front of a big screen at the other (it was World Cup time!) Mercado da Ribeira is no longer a place just to buy ingredients. Now it is a place to meet, sit and eat. There are more than twenty different "shop-fronts" for restaurants, bars and cafes serving a tasty mix of Portuguese and international dishes.

I was in Lisbon with two very good friends of mine and we visited Mercado da Ribeira at around two or three in the afternoon. It was relatively quiet (again because I think it had just opened) with more locals having lunch break there than tourists hungry to try as many different foods as they could.

I was worried this was a bad time to visit, in case the stalls were shutting up after lunch. It actually transpired to be one of the best possible times to go. I just checked the opening times and in doing so have proved that my worry was so very British of me worrying about kitchens closing as the food court is open until midnight (Sun - Weds) or 2 o'clock in the morning (Thurs - Sat). If I've never said it before, I'll say it now; Portugal is not a country that closes early. Thank goodness.

We had spent a lazy morning wandering Lisbon's streets in the early July heat and we were hungry. We tried some Portuguese codfish croquettes (yum), some different types of bruschetta and a lot of sushi (big yum!). As tempted as we were to try something from one of wine bars also at Mercado da Ribeira, we passed in favour of chilled bottles of water. There was free WiFi and plenty of people-watching opportunities, so you won't be surprised to learn we ended up staying more than an hour and I would have gladly gone back again to try some of the "pregos" (sandwiches) on offer. Or maybe more sushi. I do like sushi.

And if you'd like more Lisbon tips, please check out my Lisbon city guide. 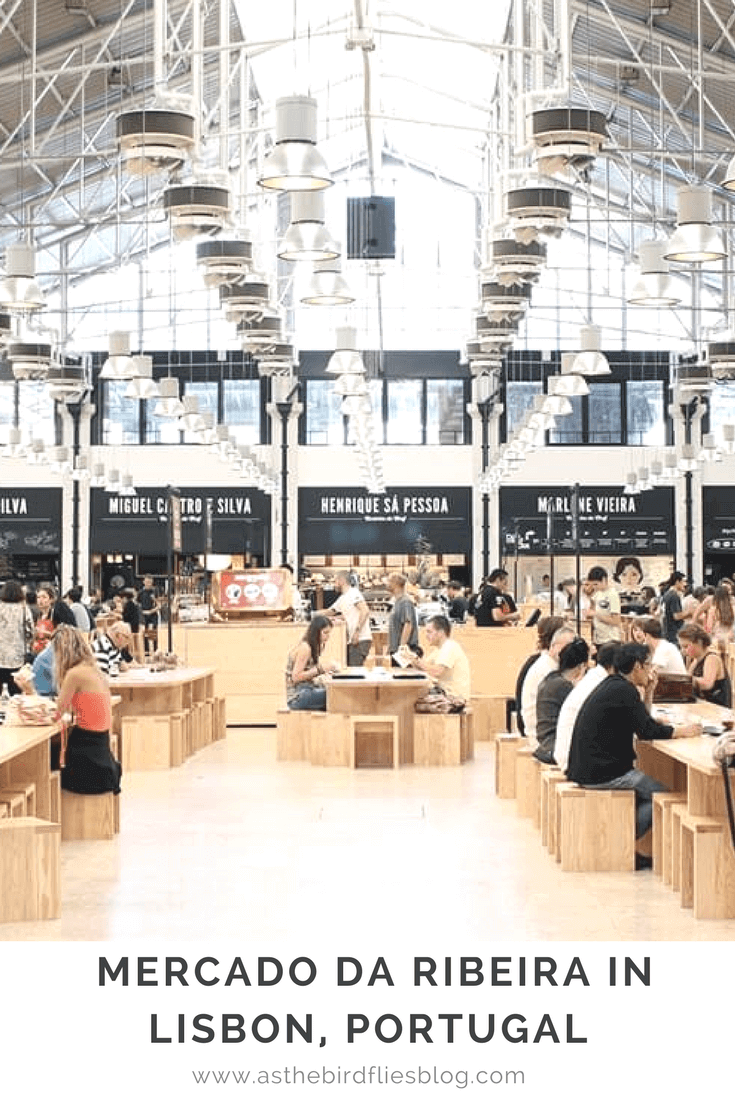 Londoner turned wanderer, Frankie is an author, freelance writer and blogger. Currently based in Amsterdam, Frankie was nomadic for two years before starting a family with her Australian partner. Frankie is the author of three short story collections, and is a freelance writer for travel and creative brands. In 2017, she launched WriteNOW Cards, affirmation cards for writers that help build a productive and positive writing practice. When not writing contemporary fiction, Frankie shops for vintage clothes, dances to 70s disco music and chases her two young sons around Amsterdam.
Find Frankie on Facebook, Twitter, Instagram, Pinterest, and Google+.
LISBONPORTUGALBEST KEPT SECRETSTRAVELEUROPEFOOD LOVETO MARKET
Next
MusicMonday: Whole Wide World by Bahamas
Previous
In photos: Snowboarding in Meribel
Posts you may also like: