Travel: Things to do at V&A Waterfront, Cape Town

"We live in a world of perception. Communication is paramount." F.W. De Klerk

The V&A Waterfront is not really the best that Cape Town has to offer a visitor and yet this area of the city that is mostly dominated by shops and hotels is Cape Town's second biggest tourist attraction after Table Mountain. It was also our base for our stay in Cape Town.

We chose to stay in a serviced apartment in the V&A Waterfront because it was a good location (for getting into the city and out of it again) and the complex we stayed on had a gym, a swimming pool and a secure place to park our hire car. This sentence should prove that we are not always keen to get off the beaten track but often much more focused on having a relaxing and stress-free stay in a new city.

Anyway, I liked staying in this part of the city. We were close to the ocean and the gym on site - which we did use every day, much to my own surprise - gave us an open view of part of the marina where row after row of luxury boats were docked. Best of all, however, if we timed our workout right we were able to watch sea lions swimming in amongst them or lying in a sun on a pontoon. That was my favourite thing about staying at the V&A Waterfront.

Hotels and Accommodation in V&A Waterfront

While our apartment was an Airbnb listing, there are lots of other types of accommodation at V&A Waterfront and we actually popped our heads in a few of them because we went there for a drink or we had friends staying there, or we were just a bit nosey.

The One & Only Cape Town was arguably the most luxurious, and it's a huge hotel found slightly inland from V&A Waterfront, just next to the Two Oceans Aquarium (which we sadly never visited but I would love to go back and do that now I have a young family). We went to the One & Only for lunch one day and then we went back for some spa treatments on another and would definitely say this is a place to stay if you're looking for 5-star luxury during your Cape Town stay.

Another hotel that caught my eye was the Queen Victoria Hotel & Manor House. I would describe this place as a luxury design hotel and it's surprisingly intimate and discreet for such a central location. Our friends stayed here actually and raved about the service, location and value for money.

Other hotels that I didn't personally get inside but have heard good things about include The Table Bay Hotel and Cape Grace Hotel. For more affordable but seemingly nearly as swanky hotels try the Victoria & Alfred Hotel or the Radisson RED Hotel which has a very fun looking rooftop pool.

And if you're spending more time in the rest of the country, here's a great list of family-friendly hotels in South Africa.

Scroll down to see some of my recommended things to do at V&A Waterfront.

Things to do in V&A Waterfront

While we mostly stuck to wandering around the V&A Waterfront area or dipping in and out of shops, restaurants and the Watershed, there are many, many things you can do at V&A Waterfront.

V&A Food Market - This was our favourite spot at V&A Waterfront and we went there nearly every day to get a coffee, a smoothie or to try something new for lunch. This indoor food market has stalls selling street food style dishes from all over the world, but of course they have local specialties as well.

The Watershed - Home to contemporary South African design, I loved walking around the Watershed - a huge open indoor space - and looking at handcrafted goods ranging from artwork to soft toys. Many of the stalls are run by individuals specialising in traditional handicrafts so you'll definitely find something unique here.

Zeitz MOCAA - This was being built during our stay in V&A Waterfront so sadly we couldn't go and check out the Zeitz Museum of Contemporary African Art at the time but I am very keen to go back and do just that. The building is part of the recent regeneration of the Silo District part of the V&A Waterfront and I have no doubt this museum is well worth a few hours of your time.

Cape Wheel - Ride high above the city on this big wheel that offers views of the urban centre of Cape Town and beyond, including up to Table Mountain.

Go shopping - Arguably what V&A Waterfront is best known for, the Alfred Mall that dominates part of the V&A Waterfront complex is home to big brands and some smaller quirkier shops. Here is also where you'll find some very good restaurants and bars, and just outside, live music and performances.

Cape Town Diamond Museum - I have mixed feelings about diamond museums but I figure if you're going to learn more about this (in)famous precious gem you may as well do it somewhere like Cape Town in South Africa which has such a long and multi-layered history with mining diamonds. If you've been let me know if it's really worth a visit!

Two Oceans Aquarium - Reportedly fantastic for kids and adults, this is high on our list should we ever return to Cape Town.

A few facts about the V&A Waterfront

1. V&A does not stand for Victoria and Albert, but for Victoria and Alfred. Prince Alfred, Queen Victoria's son, was the one who instigated the building of a dock there in 1860 and his and his mother's names are given to the two basins that are found there.

2. In 2014 the famous clock tower, which is where boats depart for Robben Island from, was painted yellow to celebrate Cape Town being chosen as Design Capital of the Year.

3. The area will soon be home to Africa's leading modern art museum. An old grain mill is being converted into the Zeitz Museum of Contemporary Art Africa, scheduled to be opened in 2016. You can see some of the work going on in

4. Despite housing Cape Town's largest shopping centre, the V&A Waterfront is still a working ship dock and you can actually watch engineers working on huge ships in the Robinson Dry Dock which is just a few steps away from the Water Shed indoor craft and design market and the V&A Market on the Wharf, an indoor food market (and home to the best yoghurt drinks I tasted all year!).

5. There are statues of South Africa's four Nobel Peace Prize winners. They are not put up on a platform and are not much bigger than the average male in height. This was a conscious decision by the artist and organisers to make these men seem both equal and on the same level as those who now look upon them. I liked that. 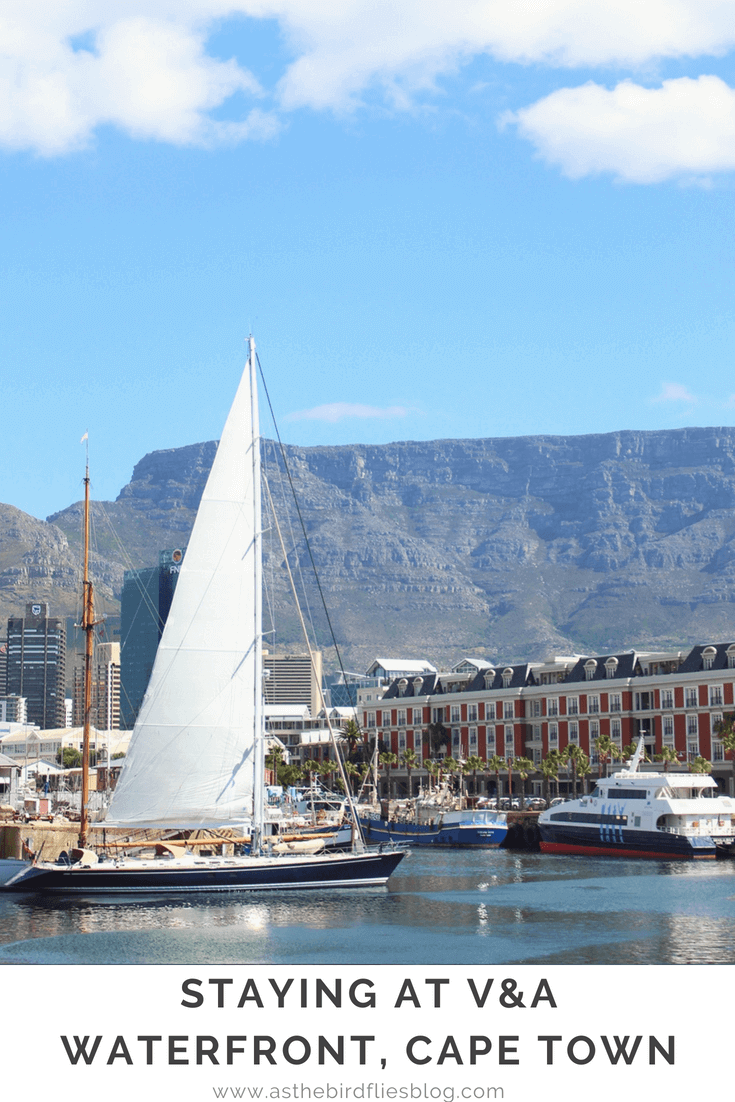 Londoner turned wanderer, Frankie is an author, freelance writer and blogger. Currently based in Amsterdam, Frankie was nomadic for two years before starting a family with her Australian partner. Frankie is the author of three short story collections, and is a freelance writer for travel and creative brands. In 2017, she launched WriteNOW Cards, affirmation cards for writers that help build a productive and positive writing practice. When not writing contemporary fiction, Frankie shops for vintage clothes, dances to 70s disco music and chases her two young sons around Amsterdam.
Find Frankie on Facebook, Twitter, Instagram, Pinterest, and Google+.
CAPE TOWNSOUTH AFRICATRAVELIN PHOTOS
Next
First Impressions: Cape Town, South Africa

Previous
Twenty-four little photos from Cape Town
Posts you may also like: