Sooo this post is for all my readers in the Southern Hemisphere who have felt temperatures drop rather than rise high like they have in Amsterdam. Not that it will get anywhere close to the temperature one usually experiences on a late December day in Reykjavik, Iceland, but hey, I'm trying to cover up the fact that it's taken me nearly six months to dig out these photos, edit them and share them.

We only had one full day in Reykjavik before we headed across the country to Egilsstaðir which is where we spent Christmas, as my partner's mother lives there. (Yes, she's from Australia and no she's not crazy to swap that climate for this climate - she's married to an Icelandic man.) But it seems one day in Reykjavik was enough for me to rekindle my love for this tiny but busy and full city. It's small size makes it so easy to just walk around and we left our cosy Airbnb apartment, close to Hallgrímskirkja around 10am, but because it was late December the sun wasn't even up yet. Being located here was an easy and quick solution for our visit to Reykjavik which was short, but there are several other choices of accommodation in Iceland so you can find some really cool, quirky and affordable places if you have a look.

For further reading about what to do in one day in Reykjavik, check out this itinerary, and you should also have a look at these honest reviews of Reykjavik hotels and hostels for all budgets.

One Day Walking Around Reykjavik

So with our one full day we hoped to do as much as possible without rushing around or depriving Baby Bird of a decent nap and play time.

This is how our day went...

We left our apartment around 9am but it actually felt a lot more like 5am because it was so dark and quiet. We enjoyed breakfast at Sandholt Bakery where Baby Bird tried Skyr for the first time and I found choosing which pastry to eat something of an existential crisis. We left an hour or so later and it was still so dark and quiet that it felt like... well, 6am instead of after 10.

Wanting to walk our breakfast off a bit we set off to find Harpa, the one place I regretted missing on my first trip here back in June 2013 (I apologise for small photos in that post, I haven't been able to resize photos in old posts unfortunately). It was around 10.30 in the morning when we noticed a change in the sky and the tones of everything turn from a dull black and white to a slow sepia. And then the light finally came on, just as we were approaching the striking site of the music hall, which looked much more at home next to the contstruction work that was going on than the white-peaks of the mountains behind it across an icey blue stretch of water. I say the light came on, what I really mean is that a dodgy bulb from the 1970s on its last legs was switched on and I spent the rest of the day having to remind myself it wasn't going to get any brighter...

After letting Baby Bird get out of his buggy for a runaround inside Harpa, we then strapped him in again (after only fifteen minutes or so of chasing/struggle) and then we walked around the streets a bit more, hoping that he would fall asleep. This was not to be. He didn't really calm down after being forced back in his pushchair and instead we walked around with a screaming baby for the next thirty minutes, trying in vain to soothe him to sleep, getting strange looks from both tourists and Icelandic locals. I'm pretty sure his protesting and outrage was only a few more minutes away from warranting us a spot on the evening news, so in the end we did indeed give in and my partner walked him home for a proper nap while I stayed out walking around and taking a few more photos of all the pretty houses that looked more Christmassy than tinsel, even in the light drizzle that had started to fall... 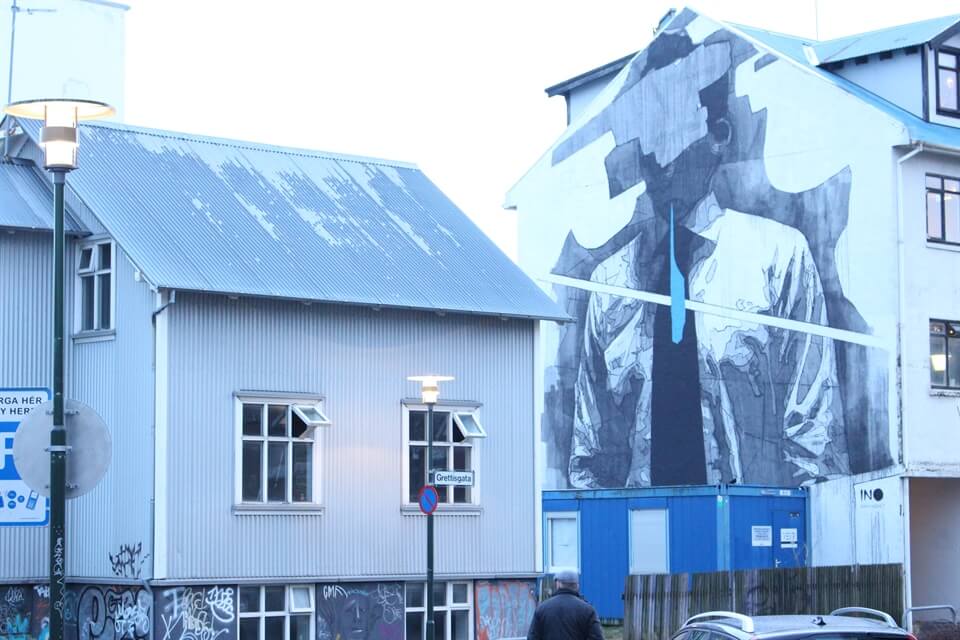 When the rain became a bit too much, I headed into Reykjavik Roasters for a coffee and found myself reading a copy of the Reykjavik Grapevine, an English-language newspaper for the city's increasing number of ex-pats. Lucky for me the then current edition was about Icelandic literature and I was still there reading articles long after my coffee cup was empty. 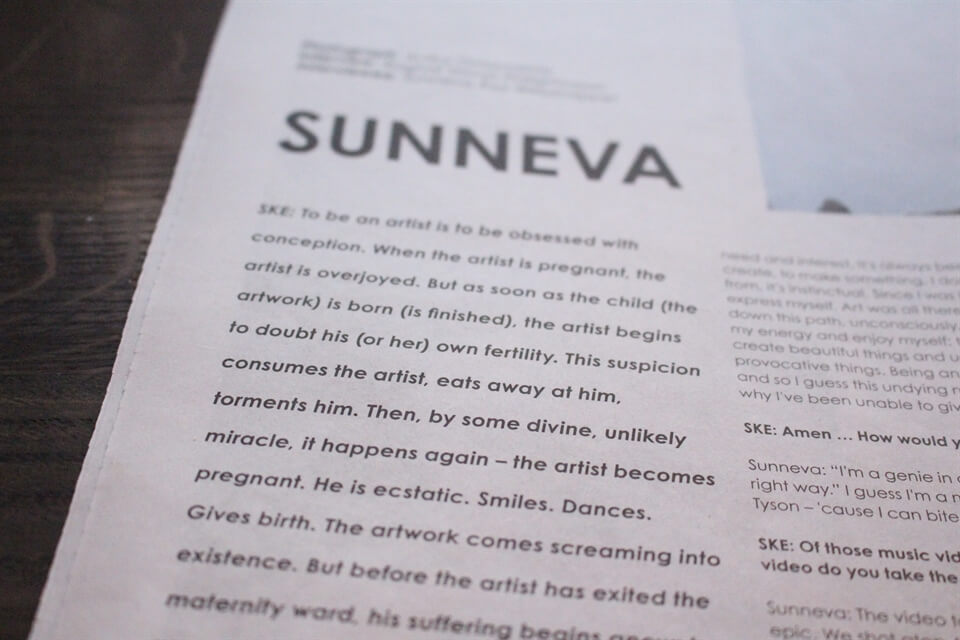 Once dry and a little wiser about several Icelandic authors, I headed back out into the dull afternoon light in search of one of several Red Cross charity shops I'd seen during our traumatic walk about the city with a screaming baby, and after successfully locating a few I popped in one or two, spending many lazy minutes flicking through those wonderfully intricate and itchy Icelandic jumpers that cost a small fortune but serve as a much needed layer of warmth to anyone experiencing an Icelandic winter. I managed to resist the temptation of buying one as I'd already packed a woollen jumper and instead I decided to do my best at getting lost to see what other views or sights or maybe food I could find.

Unfortunately my desire to see and do (and eat!) more was dramatically dampened when a snowstorm hit. Luckily for me I was just outside a Joe & The Juice so I could hide in there with a juice and a smoothie, but the weather didn't really get much kinder and so I raced home not long after that to spend some time playing with Baby Bird who was in much brighter spirits.... Unlike the world outside which at just before 3pm had turned dark again...

If you're looking for other places to spot and things to enjoy, I can recommend this list of Reykjavik points of interest, and there you can also see the city in a less snowy, cold and dark day in the photos! And if you're travelling further afield than Reykjavik (and you should!), here are some tips for how to avoid the crowds in Iceland. 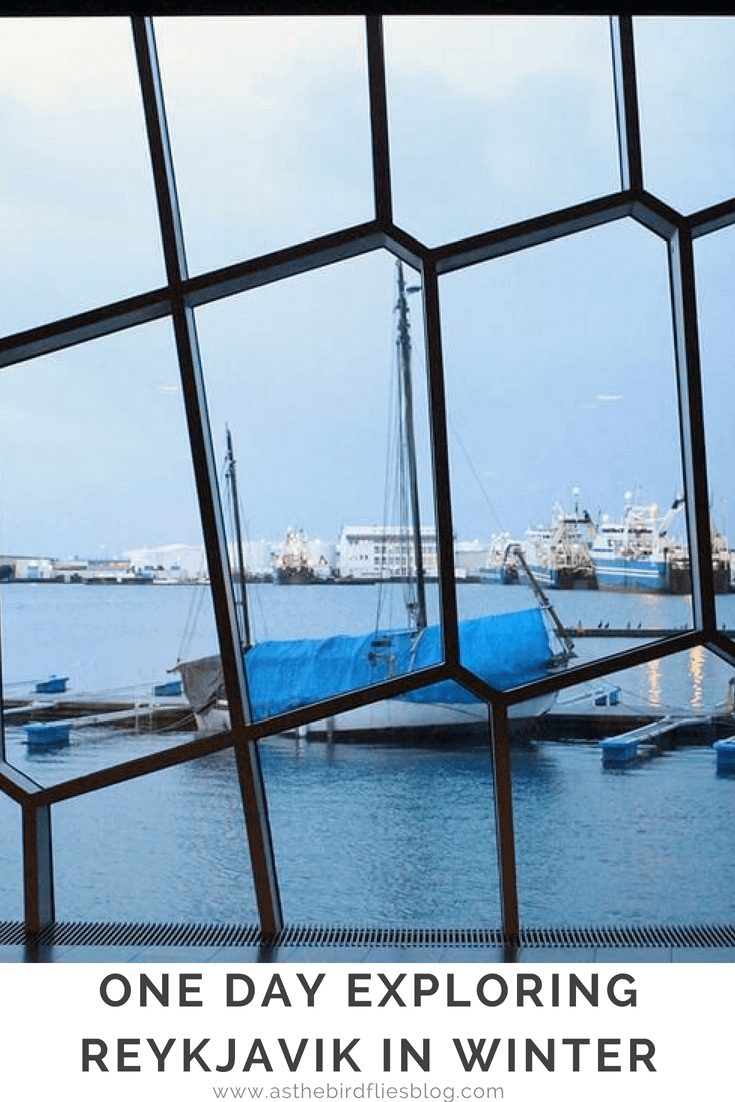 Photos taken with a mix of my OnePlus phone and my Canon 700D.

Londoner turned wanderer, Frankie is an author, freelance writer and blogger. Currently based in Amsterdam, Frankie was nomadic for two years before starting a family with her Australian partner. Frankie is the author of three short story collections, and is a freelance writer for travel and creative brands. In 2017, she launched WriteNOW Cards, affirmation cards for writers that help build a productive and positive writing practice. When not writing contemporary fiction, Frankie shops for vintage clothes, dances to 70s disco music and chases her two young sons around Amsterdam.
Find Frankie on Facebook, Twitter, Instagram, Pinterest, and Google+.
ICELANDTRAVELREYKJAVIKEUROPE
Next
A Reader's Story: Vail, Colorado - Baby!

Previous
A Diary of Motherhood: Week Thirty-Six
Posts you may also like: