Today I am sharing another reader's story. And this one's a bit different. Though it draws on a lot of the themes I write about here - travel, adventure, soul-searching, and yes, motherhood - it may not be exactly the story you would expect to read. But I think it's a really important one and I have nothing but respect for Samantha in opening up so honestly to take you on a very moving journey of contemplation, all beautifully juxtaposed against the powerful background of snowy mountains in Colorado. It's personally an environment I relate to having done a ski season myself in the past and also having spent many, many weeks on various slopes in Europe. You do feel like you're in a bubble and that's a very powerful backdrop for Samantha's story.

So let's go with Samantha to the slopes of Vail, Colorado... 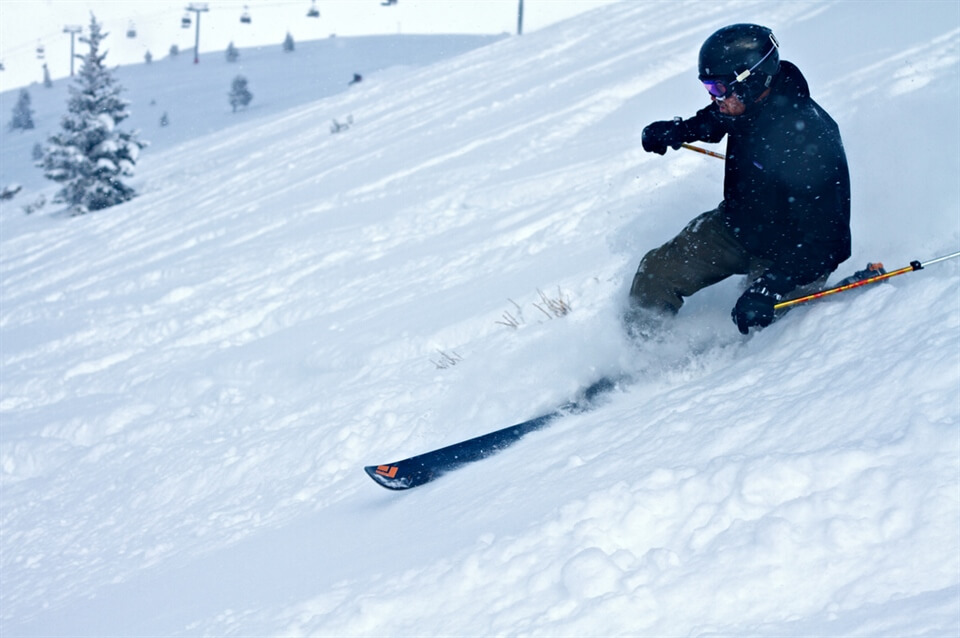 Five years ago I began joining my partner on his annual three-month stint to Vail, Colorado. We visit other countries too but so far, come January each year, we’ve been lucky enough to spend quality time in Vail. Initially, I was just happy to tag along, to see somewhere new. I remember my first day though; here I was in this huge country, in just a small part of it, ready for adventure… but all those firs, foothills all around me, a low grey white expanse of sky, no blue… I felt claustrophobic. I was momentarily filled with dread; what if I don’t like it and we’re stuck here? It felt like someone had covered up the sky or shoved me through a portal into a frightening snow globe world. I remember my partner’s face fell as he caught my expression. But that feeling left me quickly.

After that it was great, meeting people, enjoying their varying US accents and mannerisms, loving every second of different. And I had all this time to write! Waking in our rented condo and pulling back the curtains onto the vivid blue sky Colorado’s famous for, unbroken but for the peaks of snowy mountains.

You’re in a fantastical bubble. A hey here, a how are ya there, joggers with their dogs, visits to the chocolate box village at the bottom of the slopes, snow days with coffee and your laptop, wrapped up warm. Beautiful white mountains hugging you as you walk the pretty streets and take in the expense and style alongside cheap eats and beers, and the clatter of skiers as they wind their way from the base of the mountain to locker rooms, their day on the slopes done. Sunny days by the pool are magical; snow covered tiles sparkling like diamonds beneath the rays, swimmers splashing against an oil painting backdrop. A quick shower and out to enjoy après-ski, holed up with skiers and snowboarders, who, having sweated and shivered and warmed themselves up from the inside on booze, start to smell like unwashed cabbages to me! And as the sun bows out, the skaters at the ice rinks make the most of the last daylight.

Funny, despite my love for the place, all the time I’ve been coming, until nearly two years past, I’d been wondering if ‘this time might be the last’, if we might soon live a very different life, one that included screaming and poo and not much time for travelling. Yes. Like many women in their 30s, I had begun considering the baby thing.

At first it was my age. Being 35 was waking me up to the fact I had to act relatively soon if I was going to. Thing is, I’d never known if I wanted to. I’d always felt I was more of a spectator, less of a doer, in that respect. I had to really think now. Did I want a baby? The thought would make me smile, especially having spent a lot of time then around my friend and her unfathomably sweet little boy. I would find myself filled with love and desire… but then I’d get home, feel happy to have the freedom to get on with things. Next door’s raising of their children didn’t do much to endear me. It’s not just the screaming noise. It’s the constancy. Hearing the constancy of a small person’s needs, crying, reprieve, and again. And again. And again.

But there was still something missing for me, a gap to fill …. but just because I felt that way, did that necessarily mean filling the gap with a baby?

Everyone was supportive, family, friends without kids, and the friends with kids made sure to let me know all the joy motherhood could bring whilst acknowledging it may not be for everyone, that not having a child left room for you to achieve a lot of other things in life. I mean, the world’s a huge place with lots to do, to learn, to experience. There were only a few negative voices from passing acquaintances; those voices were judgemental, inferring I should ‘step up to the plate’ and re-produce, not be so lazy.

The unfathomably sweet little boy I have already mentioned was swaying me. - that adorable smile! When I was away from him I’d wish I was with them - so I wanted a baby, didn’t I? And then one day I heard myself saying to friends over coffee ‘I’ve decided to try for a baby.’ On the train home I felt weird. I had convinced myself, deliberately committed myself, so that I could finally stop thinking it over.

When it came to the crunch, I couldn’t do it. I needed just a bit more time, I thought. Deep down I knew that spending a few hours around someone else’s child is very different to raising a person every day for years. It’s forever. I wanted something, but not necessarily that. My thoughts began to really tangle.

I decided to leave it a while, not be rushed by my biological clock. I was very aware that time was an issue, of that ‘deadline.’ Too aware. I had to refuse to be rushed by that ceaseless tick tick ticking. And I’m pleased I did; once I was really quite relaxed, calmly and alone I asked myself the question again. Did I want a baby? My honest answer? Not really. Sometimes, for the nice bits, yes. But the other bits? The reality of how it would be for me to raise a child? No. I had simply been terrified that if I left it too late and found I couldn’t have one, I might regret it. I was just searching for a filler.

If I could have all the time in the world to decide, then maybe I’d change my mind. But at this point in my deliberations, I was 38. Slowly, as I let it go, cleared my head even further and got on with life, I started to realise that I hadn’t really needed all that deliberation.

If I change my mind and it’s too late, well, I’ll just have to deal with it. I still see my friend and her cute son. I love seeing them, and I’m happy she’s happy. And then I go home and I’m happy with my life. Which is pretty great by the way – did I mention I got married on the slopes last year? So I’m married, happily so, and I have good health. I still need something, and I’m not sure what it is. But that’s OK.

It can be hard, figuring out whether you want to be a mother. After all, it’s a life choice. You can regret things. It’s frightening. Finally, my mind’s been lifted from the dense fog of uncertainty it was buried under. Now, I’m 40 and still feeling good about my decision. Whatever it is I need, it isn’t a child. I’ll figure out what it is soon enough I’m sure. In the meantime? Well, I’d say it’s the perfect snowy day in Vail for a stroll.

Samantha Connolly is a writer from the UK. She incorporates themes of human relationships, mental health, and the fantastical into her work. She holds a literary degree from Kingston University, regularly writes and blogs, and recently completed her first novel, The Sister Worlds.

You can find out more about Samantha on her writing website Inkspiredwrite (she's got lots of short and sweet poems and flash fiction published up there) and you can follow her on Twitter.

And if you'd like to write a story to be published on As the Bird flies, or if you'd like to ask me a question (here and here are some previous reader's questions I've answered) then please find out more about writing a guest post here.

Londoner turned wanderer, Frankie is an author, freelance writer and blogger. Currently based in Amsterdam, Frankie was nomadic for two years before starting a family with her Australian partner. Frankie is the author of three short story collections, and is a freelance writer for travel and creative brands. In 2017, she launched WriteNOW Cards, affirmation cards for writers that help build a productive and positive writing practice. When not writing contemporary fiction, Frankie shops for vintage clothes, dances to 70s disco music and chases her two young sons around Amsterdam.
Find Frankie on Facebook, Twitter, Instagram, Pinterest, and Google+.
READER STORYGUEST POSTMOTHERHOOD
Next
A Diary of Motherhood: Week Nine
Previous
A Diary of Motherhood: Week Ten
Posts you may also like: