Our roots betray us. Even when you have four legs, a wagging tail and no speech, it is often undeniably clear where you came from. 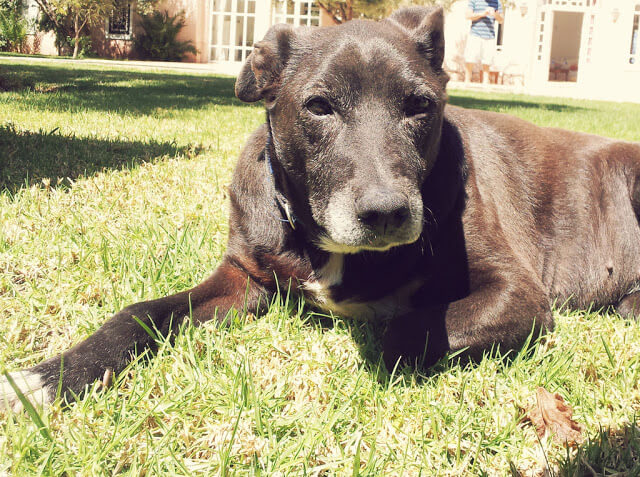 Bloom lived in Paris for many years. A family pet she watched three children grow up under a cloudy sky surrounded by grandiose buildings and traffic. She is not a pretty dog, not by Parisian standards. She is a mutt with the stout stature of a Staffordshire Bull Terrier and the longer nose of a Labrador, though I could be wrong about both. When she lies down she does so in an awkward way, dropping her weight down over her front legs with a flop. Getting up is almost always as disjointed. It was retirement that brought Bloom to Morocco, where she and I met. But despite her old bulky frame, her inelegance and muddy heritage she still had an air of class around her, understated and aloof. Just like a real Parisian. 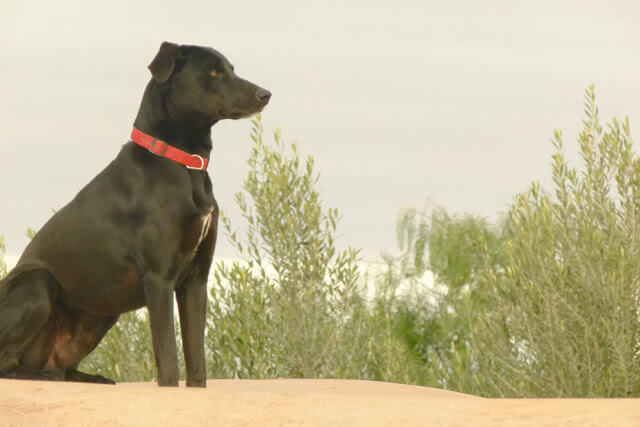 Her young companion Leon had very different roots. Now a teenage pup with an inexplicable enthusiasm for anything and everything, albeit laced with ADHD, he was found on a Moroccan beach and given a home by the same family who had been holidaying in Morocco for many years. A tall, lean cross breed with flopping Lab ears and slim toned legs like a Whippet or a Lurcher, Leon was raised by the young man who looks after the property. A shy and loyal man, I fear he may have reached exhaustion very quickly trying to reign in the natural abundant energy of Leon. Instead it was left to the vast grounds of this property and the endless fields that surround it to indulge his attention deficit. As history has taught us, when you are born free, it's hard to convince a creature otherwise.

We three met in February this year at a stage in my life when my heart was opening up to dogs thanks to travelling and staying with people whose lives are enriched by dogs. It was good for all three of us that this was the case.

As soon I got out of the airport taxi, Leon, full of force, jumped up to nearly nose height to greet me. It was the kind of leap by a big dog that would easily scare. Bloom was more restrained but still vocal, barking welcome orders at us as we carried bags into the house. I wanted us to get along so I made efforts to pet both. While Leon lapped it up pushing further into me, Bloom stood still and seemingly unimpressed as I ruffled her brow.

Later, after I'd unpacked, I went outside to where both dogs were lying on bright green grass in the afternoon sun. It was still winter by Europe's standards but in late February in Morocco, the sun is brilliantly warm. Leon reacted immediately and approached me in a few small leaps. Bloom raised her head, but not a paw. I patted Leon's head, talked to him in a language he didn't understand and walked with him over to Bloom. I bent down to the old woman and reached my hand out to stroke her head. My hand never made it. Leon intervened, forcing his crown under my hand. I tried again but Leon was there once more.

"Leon! Let me stroke Bloom!" I insisted. But the same thing happened again and again until I uncomfortably pushed Leon out of the way and managed to rub Bloom's old sagging belly a few times. Still Leon came back again undeterred. Pet me, stroke me, love me!  He seemed to be saying, begging. Weak as I am, I did just that and then eventually I walked away from the two dogs, slightly bemused.There followed more of the same jealous behaviour by Leon and some increasingly sneaky behaviour by me. I found where Bloom liked to sleep at night and worked out what time she would retire. I would then find her and sit with her for a few minutes, rubbing her belly and tickling under her chin. She'd close her eyes in peace but I could tell that there was no assumption on her part that I should attend to her. Unlike, Leon who would rush to us when were outside or push his paw against doors and windows when we were inside. Only when we were completely out of sight would he turn to Bloom, starting play fights with her by biting the soft flesh that hung below her jaw. Ever the Parisian, she would turn away expressionless and composed. Leon kept coming back for more until Bloom snapped and Leon eventually got the playful scrap he wanted, complete with rolling turns, yapping and nibbling. I'd watch these dogs for hours during our stay in Morocco. I'd never have called them inseparable but I could see they were friends, in their own silly way.

One day, I was suddenly fed up with our secret affair. It felt silly to only be allowed to show Bloom affection away from Leon's darting eyes. He wasn't the only one who deserved my attention and it was about time he knew this and got used to it.I chose my moment on another sunny day. Bloom lay on her side asleep and Leon was less than two metres behind her lying in an alert sphinx-like position. He watched me approach and seemed to almost frown as I sat down next to Bloom. By the time I was folding her ears in my hand he was at my side and up to his old tricks, nuzzling his way in between us.

As soon as he was crouched down he'd leap up again and head butt my hand out of the way. Bloom opened an eye and looked around her knowingly. She was neither upset nor bothered by Leon; this was the way he was.

I sighed and gave up, again. Reluctant to dish out affection to a selfish dog, I left them both and walked back to the house shaking my head but smiling too.

Just before I turned the corner I looked back at a calm and different scene. I saw Leon was lying down again, his head touching Bloom's back. He nuzzled into her gently and I realised I'd never seen such a small and sweet action from this big, clumsy dog.And that is the problem of where I come from. I didn't grow up with dogs. I know little about them and their idiosyncrasies, their personalities, their loyalty - but I assumed I did. That simple gesture by Leon proved me wrong. Because though I'm human, I'm not automatically the leader of the pack. And maybe, in Leon's eyes, I couldn't compete with this old worn out Parisian dog, for I now believe it was Bloom's attention he was jealous of, not mine.

Londoner turned wanderer, Frankie is an author, freelance writer and blogger. Currently based in Amsterdam, Frankie was nomadic for two years before starting a family with her Australian partner. Frankie is the author of three short story collections, and is a freelance writer for travel and creative brands. In 2017, she launched WriteNOW Cards, affirmation cards for writers that help build a productive and positive writing practice. When not writing contemporary fiction, Frankie shops for vintage clothes, dances to 70s disco music and chases her two young sons around Amsterdam.
Find Frankie on Facebook, Twitter, Instagram, Pinterest, and Google+.
MOROCCOMARRAKESHTRAVEL STORIESTRAVEL
Next
Moments of Happiness: Breakfasts in Morocco
Previous
My Thoughts: The simple habits that make me happy
Posts you may also like: