There are many, many places I've been to, developed strong connections to, that I've failed to write about on this blog. There are a number of reasons why this is the case, but the most likely one is that time has run away with me and I find that whatever I once wanted to say is already dated or has become diluted by experiences that subsequently followed. Or, as is the case with Marrakech, there isn't much to say or to share because it's too personal, and frankly, I didn't do that much.

I lived in Marrakech for nearly six weeks in February and March of 2013. My partner and I hid out in an incredible villa we found on Airbnb about fifteen miles outside of the city centre and we spent most of our time working, relaxing, reading, and playing with the two dogs and one cat that also called the villa home. After sharing my first impressions of Marrakech, I went offline a bit more than usual and instead focused on other work. It was during this time that I published my first short story, See the Amalfi Coast, and I made major strides to finish my first fiction collection, Shy Feet. We only ventured into the medina a handful of times and more often than not I forgot my camera or I felt too overwhelmed by the chaos of what was happening around me to try and take any decent photos. Two years later we returned and we fell into the same reclusive behaviour, thanks this time to our staying in one of Marrakech's most luxurious hotels, the style and indulgence of which we're yet to discover again.

That's why I'm very happy to have a real travel story about Marrakech to share with you today. Annika is a passionate traveller and writer - she's a Travelette like I used to be - and although I'm yet to meet her in person, her energy and enthusiasm for travel and life always beams out through her stories and the emails we've shared.  You can read all her travel stories on her blog The Midnight Blue Elephant and you can follow her travels in Facebook, Twitter and Instagram.

So read on to find out why Marrakech is a special place to Annika, and essentially how you can spend a perfect day in the city. I know I'll return to Marrakech again, and I'm taking this article with me as a great itinerary for spending a day enjoying and embracing, rather than drowning in the chaos!

Marrakech and I had a slow start. Actually no, that's not true. At first, I hated it.

I had just arrived from beautiful, chilled Essaouria and now I was being dumped into this hot mess of sounds and people, snakes and monkeys, and there was not a cold beer in sight to make it any better. Everything seemed to be dirty or crumbling down around me, and unlike other somewhat derelict places, it completely lacked charm. The only place I can recall fondly was a big ice cream parlor on Avenue Mohammed V, but the queues were long and the wait seemed like a lot of effort for ice cream. I remember feeling scared. Scared of being ripped off, scared of being impolite, scared by traders everywhere trying to force their goods on me, scared of feeling forced to acquire too many things which would cost me dearly in overweight baggage at the airport.

So no one was more surprised than myself when two years later I found myself thinking again about Marrakech. It was like a little voice inside my head telling me to give Marrakech a second chance. So I did.

I remember arriving late in the afternoon to a long line at immigration that delayed my arrival. However, my driver still managed to find me once I was out, no sign necessary. On the roadside by the Jemaa el Fna, I was handed over to a porter who took me and my luggage into the middle of the medina. I followed, amazed by the sights of the big square. A little in awe, I was happy for my guide and followed him deeper down what felt like Alice's rabbit hole until we stopped at an unassuming door. Marrakech doors are the best. Not only are they usually pretty and ornate, but they hide the best secrets: shops, restaurants, and very often a beautiful riad. One big step and I stumbled into one of those; Chambres d'Amis, my home for the following nights.

I expected my own doubt would eventually catch up with me, that I would question why I had come back to this mad city and, this time, had positioned myself smack bang in the middle of it. Instead, I was led to the rooftop terrace and brought a cold bottle of local rose wine. What? Wine in Morocco? What a delight! Then there was dinner and no time to ponder upon my own foolishness: cucumber salad with yogurt and a very secret ingredient that turned out to be mayonnaise as I was later told. Kefta tagine with a sizzling egg on top. Orange slices drizzled with cinnamon for dessert. Then prayer time with the sound of countless mosques calling for maghrib. This is a sound that has always been wonderfully exotic and soothing to me, even though I don't have a god to believe in.

There I sat with my book and my wine, the city coming to life with other sounds: children laughing, children crying, vendors still praising their wares, hip hop music blaring. I could barely hold my excitement for the next day and to finally explore this new Marrakech, the one I might actually enjoy.

The next morning I left prepared. Map in one hand, Google maps on my phone in the other, carefully looking left and right before I dared to venture out. I didn't get very far because Chambres d'Amis is conveniently located very close to the donut man who sells oversized, freshly baked and sugared rings of heaven. A perfect breakfast to-go.

My first destination was the Maison de la Photographie, deep in the heart of the souks. What should take ten minutes, took about an hour to get to, all my maps proving useless in the medina’s maze of streets. Once I arrived exhausted and dusty I realised I didn't have enough cash left for the cover fee. The nice guy at the entrance took pity on me. Why not have a look around and maybe I wanted to buy prints later which I could pay for with my credit card? And if not, no worries, I should just enjoy the photographs!

A few hours later I left with a parcel of prints, and set about finding some greenery. I knew exactly where to go: Jardin Majorelle. Previously owned by a hero of mine, Yves Saint Laurent and his partner Pierre Bergé, it was a magnificent showcase of cacti, bougainvilleas, and lily ponds as well as home to a beautiful museum with the best of Berber culture and fashion. The buildings were mustard yellow, turquoise or Majorelle blue, a cobalt shade named after the former owner, Jacques Majorelle. I stood in the gift shop contemplating what I could paint at home as I stared at a shelf full of Majorelle Blue paint cans.

A little tip for you now: the taxis outside Jardin Majorelle charge extra as they need to cover their wait time and parking fee, so I made my way to Avenue Mohammed V and hailed a cab from the street. Negotiations were relatively easy as I was happy to share my taxi with locals too. In fact, the taxi driver was now calling me a Marrakchia. I knew he was fishing for a big tip rather than really admiring my few phrases in broken French and the only Arabic word I knew, shokran, but I didn't mind and gladly tipped him well. 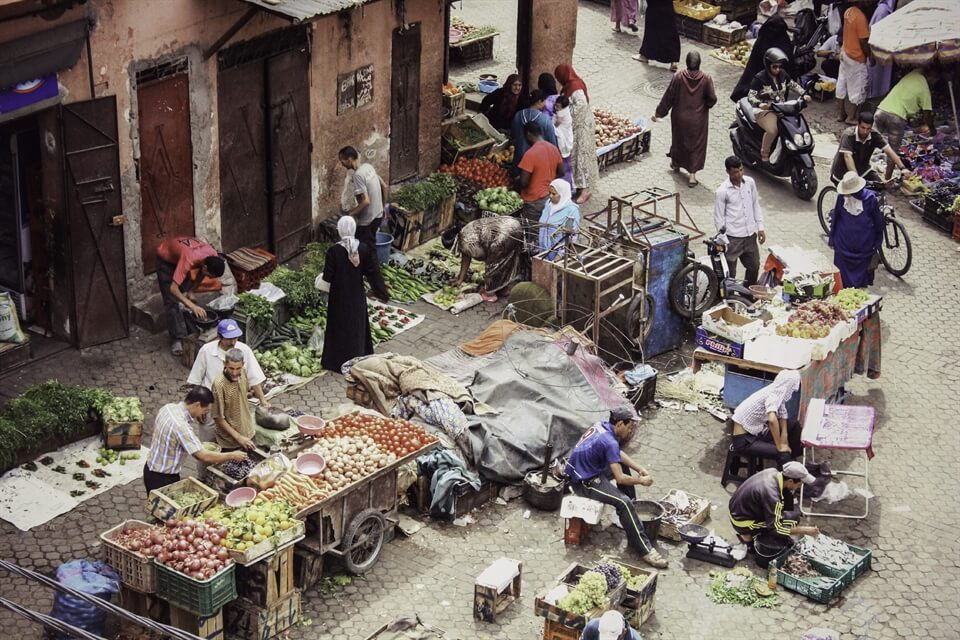 Back in the medina, the Jemaa el Fna was transformed. Food stalls had popped up everywhere, covering a part of the square in neat, numbered rows. It was dinner time and I followed a small cloud of smoke emerging from one stall: number 31. No menu, no variety, all I had was a choice of how many merguez sausages I wanted and whether I liked mint tea or coke with my meal. I sat between a father and his son on one side and a whole family on the other. The little boy ate his sausages with gusto though his real highlight seemed to be his very own bottle of coke. I was also digging in quickly as there was a line of people waiting for a seat behind me. I finished and walked away. With great ease I begin drifting through the crowds on the square. Whenever there was a circle of people, you knew something exciting was happening in its middle. Acrobats, dancers, snake charmers, and those storytellers were at work. I tried my best to ignore the monkeys who were wearing a diaper and a leash, I felt nothing but pity for them. 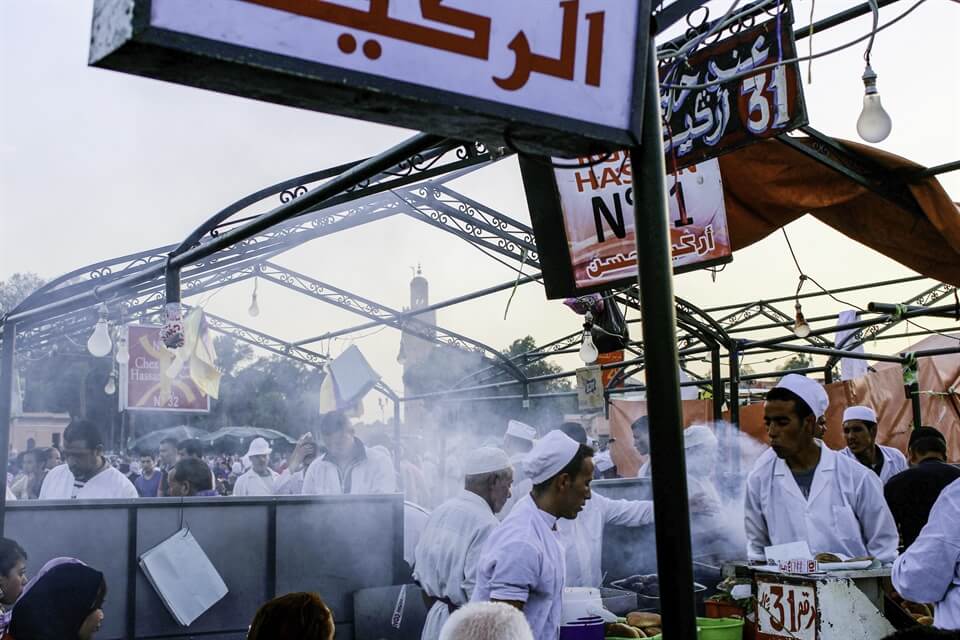 My beating heart, my sweaty palms - I was simply falling in love, falling deeply in love with Marrakech.

Now I try to return to Marrakech at least once a year. I go to get lost in the medina’s maze. I go to eat merguez from a market stall. I go to play with scrawny kittens. I go to hear the call to prayer while watching the sun set. If people ask me if I don't get tired of the city, I just shake my head. How could I ever get tired of my biggest love on second sight?

Anybody else get a sudden urge to Google flights to Marrakech? Just me? Thank you so much Annika for taking us with you on your journey. She's written lots of other stories about Marrakech on her own blog including documenting the mentioned visit to La Maison de la Photographie, more detail about her love affair with the city, and my personal favourite How to Travel in Morocco as a Womand and not get overcharged for a pomegranate. 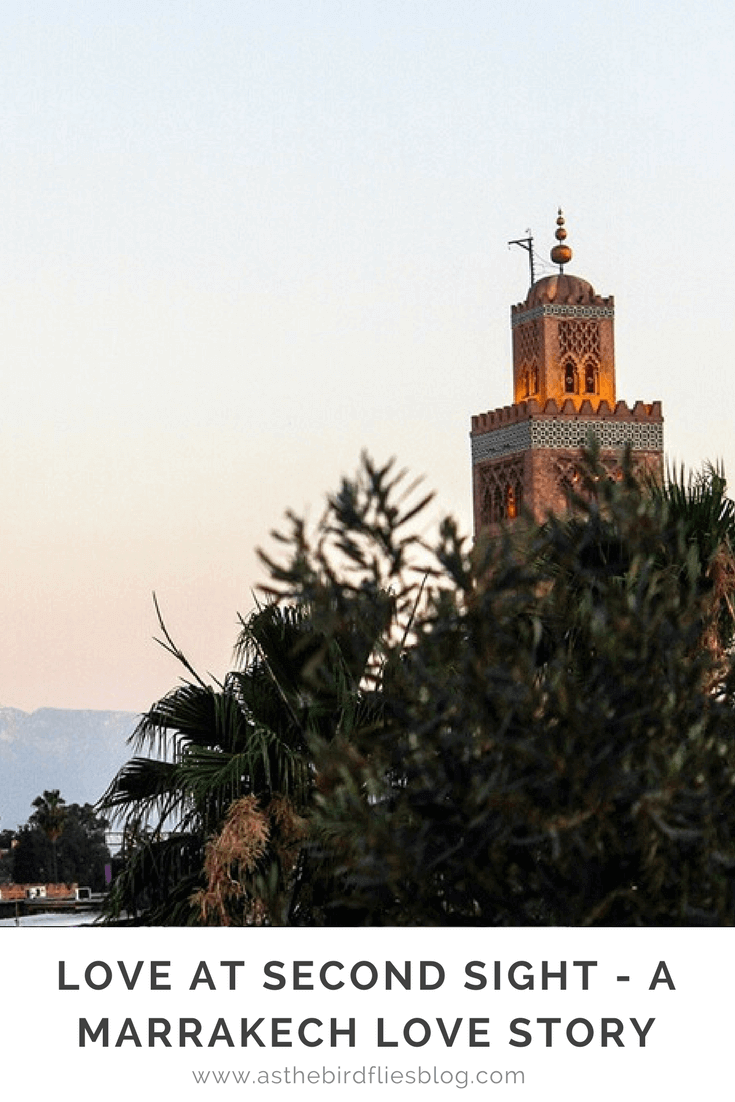 If you would like to share a special travel story or another personal account about travel in general, about books or about writing or about work or conquering fears, I'd love to share your story on As the Bird flies.  You can find out more on this page all about guest posts.

All photos by Annika Ziehen.

Londoner turned wanderer, Frankie is an author, freelance writer and blogger. Currently based in Amsterdam, Frankie was nomadic for two years before starting a family with her Australian partner. Frankie is the author of three short story collections, and is a freelance writer for travel and creative brands. In 2017, she launched WriteNOW Cards, affirmation cards for writers that help build a productive and positive writing practice. When not writing contemporary fiction, Frankie shops for vintage clothes, dances to 70s disco music and chases her two young sons around Amsterdam.
Find Frankie on Facebook, Twitter, Instagram, Pinterest, and Google+.
READER STORYMARRAKECHMOROCCOTRAVELGUEST POST
Next
A Diary of Motherhood: Week Two

Previous
A Diary of Motherhood: Week Four
Posts you may also like: