First Impressions: A Hideaway in Marrakesh

The woman next to me on the plane didn't know how to fill in her landing card.

She was confused by what "date of deliverance" meant and I suddenly had to search for the French reason why this had been literally and therefore badly translated. Together with my brain-racking and her tutting and worrying we got there in the end. (It means date of issue.)

A man with a kind smile, soft but brilliant English and a slight limp met us at the airport and proudly showed us to his comfortable people carrier of a taxi. He told us that seat belts were only required legally in the front so we could "do whatever you want" back there. I fastened up anyway. Seat belts aside it's always best to be a little cautious when you're visiting a foreign land for the first time and have no idea what to expect of it.

One of the best parts of our (very) last minute decision to spend some time in Morocco was that my father has been here before, taking in small chunks of this surprisingly vast country a few years ago. He shared his stories with us at the weekend as we stopped off in the UK bridging the gap between -20-something and 20 something temperatures with a familiar 1 or 2 degrees celsius. Uncomfortable camels, devine views high up in the Atlas Mountains, sudden sand storms in the Sahara Desert, sweet mint tea, stolen champagne from too kind Air Maroc cabin crew and a charming Moroccan tour guide with a plummy British-public school accent... Dad painted quite a picture.

I'm yet to experience most of the above - apart from the sweet mint tea, which already causes huge sugar rushes of smiles - but I already have the foundations of my own small memories.

After the date of deliverance debacle I afforded myself a glance across the woman's (ample) chest to gaze out of the window a few minutes before we touched down. Terracotta brown, peachy pink and warm red square lego bricks covered the ground; the flat-roofed and creatively chaotic Medina from above. On the horizon a vast arid land stretched away still pink, red and brown but laced with dark evergreen trees and shrubs too. It's a landscape so unfamiliar that only the most southern corners of Europe hint at what lies across the sea in its further most corners.

As soon as we left the airport our friendly taxi driver started to point out the key sights; the entrance to the Royal Palace, the tall minaret of the city's most famous mosque and finally he gestured straight ahead " The Great Atlas Mountains," he said and I still now wonder if I detected extra emphasis on the "Great", not that I blame him. They are a mighty sight. I think I may have to get to know them better...

I wasn't glad of my seat belt until we approached the entrance to the Medina announced by traffic and horns and activity rather than a sign. It seemed everyone and no-one had the right of way. A policeman with bright white elaborate sleeved gloves blew into a whistle and stood in the middle of it all with little control or influence on what was happening around him.

Inside, Marrakesh came to life suddenly. French and Arabic shop signs that had faded in the sun hung above flat fronted shops that men sat in low stools in front of. Small street stalls were serving food that I wanted to smell. Donkeys sauntered along pulling carts of vegetables and herbs that we and an army of scooters drove past. Women were dressed head to toe in fabrics of many colours and many patterns and men wore long smocks with pointed hoods pulled up on their heads (jellabahs, Google tells me). I know I may border on the inappropriate and ridiculous in saying this but my first thought was how much they looked like wizards and this made me smile.

We noticed bikes being ridden everywhere, with huge wheels and children balancing on cross bars. The mopeds here are old and stylish and almost silent. Taxis are painted beige and come in all shapes and sizes and are almost always full to the brim; four full grown men in the back, a man and a woman sharing the passenger seat. A bus crossed our path as we tried to enter the Medina and I saw a sign I could have seen that morning in London; three beautifully young teenage girls wearing brightly coloured headscarves leaning into one another talking and smiling on a bus. Amidst the temporary chaos and my gratitude for my seat belt I wondered what thoughts they were sharing.

Away from the Medina and the city, our trusty concrete road suddenly dropped into a bumpy dirt track full of dips, dives and pot holes. I almost felt like I'd fallen into a page of the Lonely Planet when a herd of sheep crossed our rocky path from one red field of dry to another shepherded by a boy who couldn't have been older than thirteen. He was chewing on a cocktail stick and staring at us inquisitively.

Of course, I immediately noticed the heat and the sun and the big blue sky. There are walls in the villa we are renting that are painted a shade slightly darker than the sky and I think I will spend many hours wondering which shade I prefer but knowing I love both. 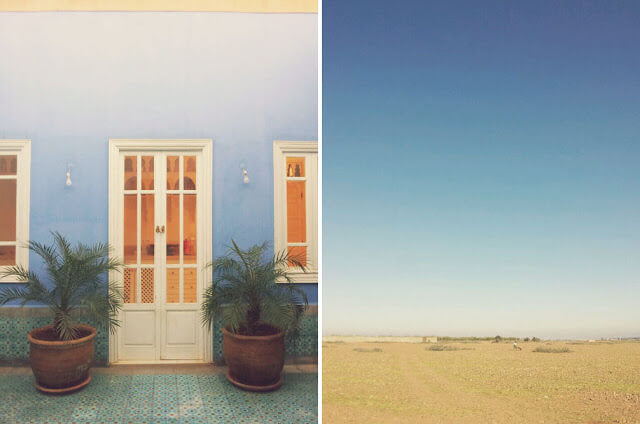 And while we bask in the glory of seeing an absent friend - the sun - locals are still shivering in winter. Everyone we see outdoors are wearing winter coats and inside we see long sleeves and layers. They ask us if we're cold. No, we say. It feels like summer.Our villa sits in the middle of nowhere and is peaceful and private thanks to the walls that Morocco likes to put up around cities and buildings. It's our hideaway as we catch up and wind down a bit and it comes with an orchard of incredibly old olive trees, the friendliest cat and two dogs of polar opposite personalities. A young, tall and shy man looks after us all and the property. He speaks no English but a little French and has the most perfect accent that my University degree could never give me. To say that these are conventional first impressions of Marrakesh as a city would be inaccurate and unjust as there's not yet been the opportunity to explore further; we snaked slyly through the Medina and the surrounding roads without delay, our destination on the opposite side of the city. But they are the foundations of what I believe will be five weeks of collecting first, second, third and more impressions of a now not so foreign land. I can't wait...

And if you'd like to read more about Morocco check out this post about Azemmour and its history.

Londoner turned wanderer, Frankie is an author, freelance writer and blogger. Currently based in Amsterdam, Frankie was nomadic for two years before starting a family with her Australian partner. Frankie is the author of three short story collections, and is a freelance writer for travel and creative brands. In 2017, she launched WriteNOW Cards, affirmation cards for writers that help build a productive and positive writing practice. When not writing contemporary fiction, Frankie shops for vintage clothes, dances to 70s disco music and chases her two young sons around Amsterdam.
Find Frankie on Facebook, Twitter, Instagram, Pinterest, and Google+.
TRAVELMOROCCOMARRAKESHFIRST IMPRESSIONS
Next
THANK YOU!
Previous
MusicMonday: You & I by Local Natives
Posts you may also like: