City Guide: Things to do in Ljubljana

I visited Ljubljana in the summer of 2014. I was there to enjoy a festival as part of a project I was working on at the time - Must Love Festivals. My time in Ljubljana was sunny, warm and full of summer cheer so yes, you could say I was under the influence of some good summer weather in Slovenia's capital which has influenced just how much I enjoyed my time there, but hopefully my city guide sharing just some of the great things to do in Ljubljana will help you enjoy it just as much as I did. It will certainly help if you're heading to Ljubljana in the summer for a weekend city break.

The Best Things to Do in Ljubljana

Ljubljana is a small but lively capital city with plenty going on,  I was there in early July when temperatures were in the high 20s/low 30s and there were several festivals and events (many of them free) just during the weekend I was there, namely the Ana Desetnica International Street Theatre Festival (which would be fantastic for children, FYI) and the Ljubljana Jazz Festival, where I got to see Gregory Porter perform.

To find out more about what's going on in Ljubljana in terms of festivals and events, check out the tourist board's website.

Where to stay in Ljubljana

Before we get going with the many fantastic things you can see and do in Ljubljana, let's talk accommodation. My visit to Ljubljana was one of the few times I have stayed in a hostel in recent years, however, this wasn't really an ordinary hostel. It was a hostel with a story. Perhaps more importantly, it was also a hostel with private rooms.

The story part relates to the hostel occupying a building that was once a bank and Hostel Tresor has maintained a number of the bank's features and plenty of its personality. Rooms are basic, as are bathrooms, but this is what keeps the cost so low. There are a few things you can't find fault with - the very reasonable breakfast which is of budget hotel-standard - and the location. You are rolling distance away from the main square of Ljubljana, Preseren Square, (and I mean literally because it's downhill) and you can walk all over the town from the hostel which is surrounded by shops and restaurants, and happens to be opposite the post office. I was so impressed with Hostel Tresor that I wrote a short story inspired by my stay there; it also mentions the castle which you can read more about below.

If you just can't face hostel life (and I don't blame you!) I spotted some lovely looking hotels for all budgets and styles. Design hotel fans should check out G Design Hotel and Hotel Nox, while those who enjoy cozy boutique hotels should have a look at Vander Urbani and Antiq Palace, which is also a spa hotel. If you're looking for a more established and bigger hotel with a little more luxury, try Grand Union Hotel. But with all these hotels, it's important to stress that you're hardly blowing your budget in one night. It's very easy to get value for money in Ljubljana as it's still not as expensive as some capital cities in Europe.

Things to do in Ljubljana

It's summer. It's (hopefully) warm. Time to get outside and explore. Ljubljana is easy to walk around and over a few days you can see most if not all of the city. Start off by heading to Preseren Square to get your bearings and to also see the bridges. Then you could wander along the river, or you could head into the older part of the town and see where the cobbled streets take you. All of the places listed below can be reached by foot.

An essential Ljubljana thing to do, visiting the castle will give you spectacular views of the city, will help you spot other things you want to do and you'll also learn about the history of Ljubljana. You can get up to the top of imaginatively named Castle Hill by walking or by funicular (which I'm embarrassed to say we did because I usually prefer to hike up any kind of hill... just so I can have an ice cream later... And spoiler alert: I still had the ice cream later.

We didn't spend much time exploring the castle itself. The views at the top were enough to keep me happy. I could see the mountains and as a snowboarder I tried to imagine what they would look like snow-capped and tantalisingly close to the city. I did a bit of digging later and found out that the ski slopes are less than one hour away, that's quite a claim to fame for a capital city!

It's also worth considering head up to the castle to watch the sunset, especially if you're travelling with a loved one who you really want to impress.

Get another good view on the other side of town

See the photo below of me with the castle in the background? How did I do that? By going up to the top of the even more imaginatively named Skyscraper building, or Nebotičnik as it's called in Slovenian. One of only a few tall and modern buildings in Slovenia it's easy to find and once inside you should get the lift up to the 12th floor where there's a cafe-bar with an outdoor terrace. Head here on a sunny summer's day for a morning coffee and photo opportunities like the one below... or wait until the evening for the sunset and some beers.

The biggest surprise for me in Ljubljana was that it's a cycling city. I saw lots of locals on bikes and I also found the Bicike(lj) bike-share scheme managed by the tourist board. I hired one for an afternoon and explored parts of town I'd not yet reached as well as heading to Tivoli park (below). While it's not as flat as my native Amsterdam and the bike took a bit of getting used to I felt safe and found the bike paths well market out. It helped confirm Ljubljana as a very people-friendly city as I should also add that the old city centre is mostly vehicle-free and pedestrian only.

Check out the street art

The best street art in Ljubljana can be found in the bohemian areas of Tabor and Metelkova Mesto, an old military barracks where the streets are lined in graffiti. Sadly I didn't get much time to explore the latter much but there are lots of photos of the area here. I also found tags, graffiti and other works of street art scattered around the city so keep your eyes open!

If you're spending a Friday in Ljubljana you lucked out. The Open Kitchen market is one of the best reasons to come here and eat all the food! Held every Friday in time for lunch at Pogačarjev trg (central market square) which is just in front of St Nicholas Cathedral, you can expect food (and chefs!) from all corners of the globe as well as local delicacies. There are also drinks to be enjoyed! Hurray!

Catch some greenery in Tivoli park

As I mentioned above, I went to Tivoli park on my bike and it was an unexpected oasis of green in a... well, a very pretty, open and green city, but hey, there's nothing wrong with MORE green and open space, right? This would also be a great place to take kids as I saw a playground and lots of grass to play on.

Have a drink by the river

Ask any local Ljubljianer (I may have just made that word up) what they like doing most in Ljubljana in the summer and I suspect the vast majority would say 'having a drink by the river' and who can blame them when there is endless(ish) evening sunshine, very cheap wine (like 2-3 Euros a glass, people!) and a passing production line of people-watching opportunities. Why not join them...? We did. Oh and if you don't like drinking, then many of the bars along here also sell really yummy ice cream. (And yes, drinkers you can have both.)

Well, this was my priority when I got to Ljubljana so maybe it's yours too? I've written a pretty comprehensive guide to vintage shopping in Ljubljana, but let me just re-cap by saying I was very pleasantly surprised and if I was to go back, I'd have extra space in my suitcase.

Go paddleboarding down the river

I wasn't quick enough to snap a photo of it, nor did I have enough time to do it myself, but we did see people stand-up paddleboarding down the river which looked like a jolly lovely way to spend a summer's evening. One to add to my list for when I return. I've heard it's a popular thing to do in the summer - especially at sunset - so maybe book a ticket in advance.

Ljubljana has the potential to be a bit of a foodie capital with the Open Kitchen markets and plenty of lovely restaurants to be found. My favourite meals were a lunch in the sunshine at Gostilna Na Gradu and an evening al fresco dinner at Spajza, which looked very unassuming from the front but inside was a cute and cosy restaurant with DELICIOUS (yes, it needs to be capitalised) local dishes and wines. PS In case you haven't guessed, Slovenian wine is pretty good.

Also, Slovenia is well known for its high quality salt and honey, FYI, so foodies go stock up on this here!

Go on a walking tour

I'm not always one to recommend a walking tour because I like the adventure of discovering a city on foot myself, but I have to say I really enjoyed our walking tour of Ljubljana because it filled in a lot of gaps regarding the country and city's history. I can't remember the company we went with but there are lots of different tours you can choose from, many of which have a them like food and wine, or street art, and most meet and depart from Preseren Square.

And if you still have energy to explore the rest of Slovenia, but will remain based in the capital city, here's a great post with a list of day trips from Ljubljana. 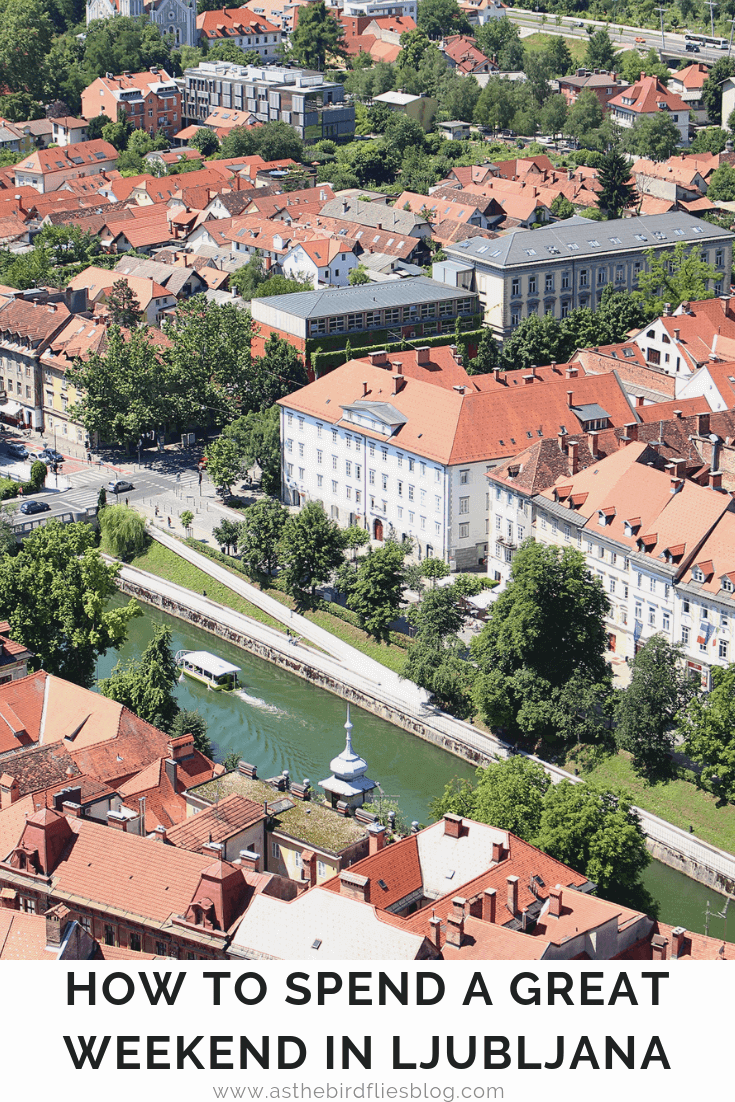 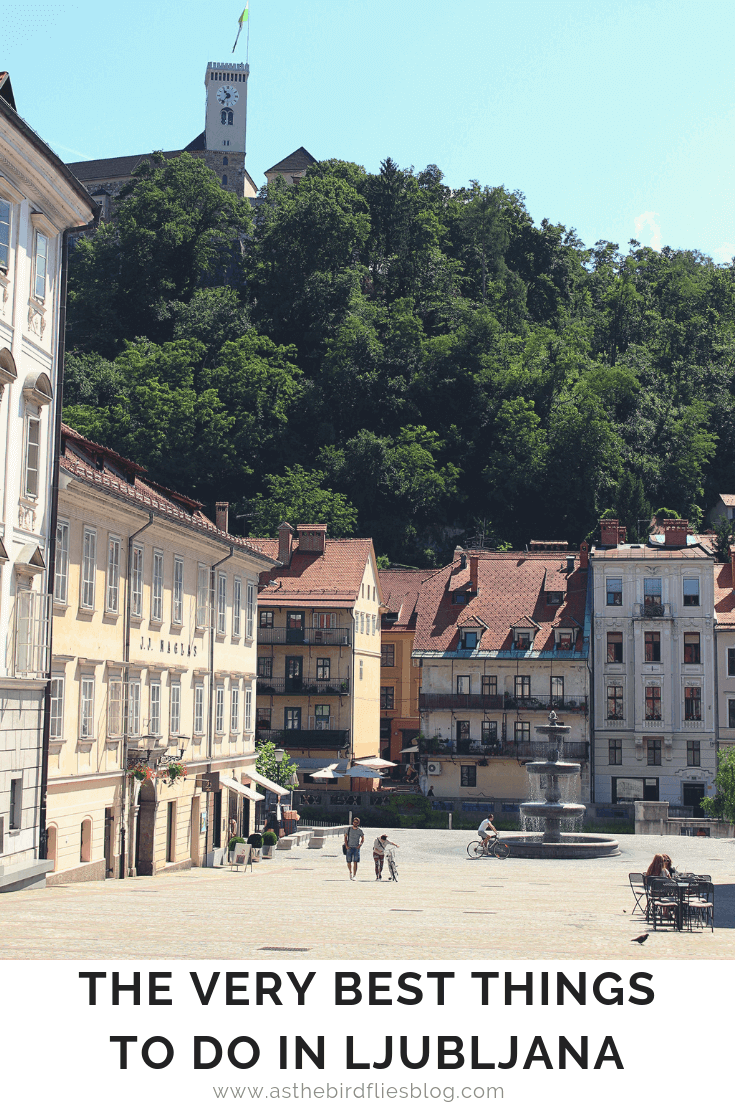 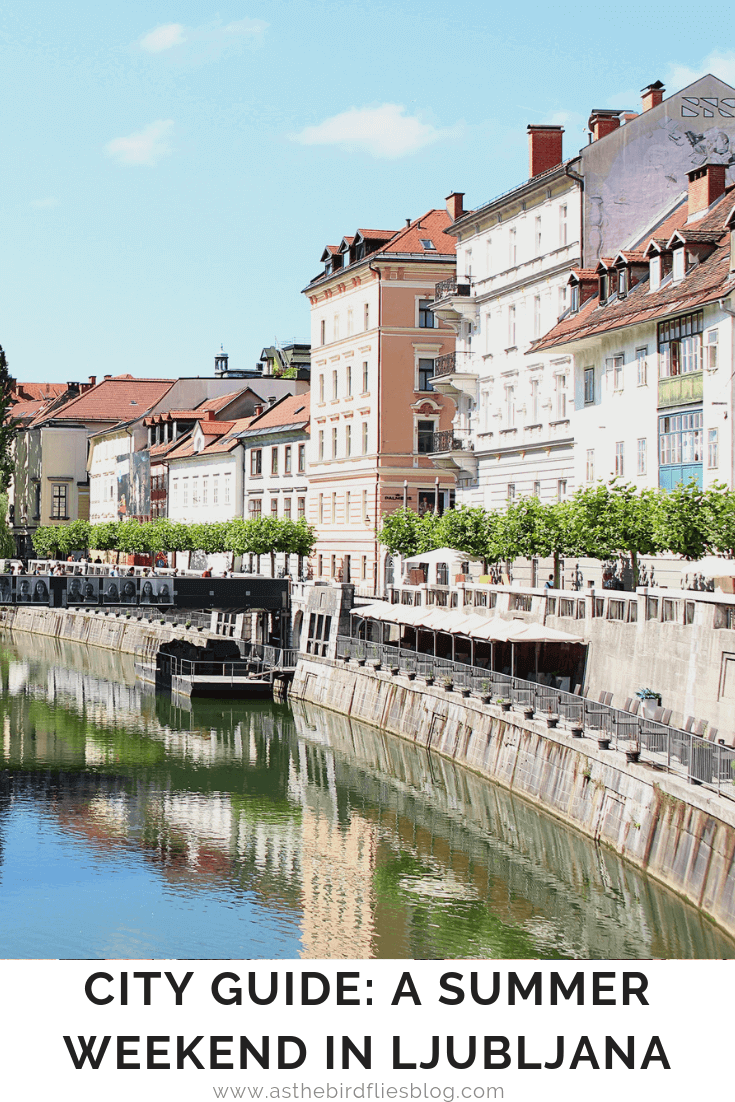 Londoner turned wanderer, Frankie is an author, freelance writer and blogger. Currently based in Amsterdam, Frankie was nomadic for two years before starting a family with her Australian partner. Frankie is the author of three short story collections, and is a freelance writer for travel and creative brands. In 2017, she launched WriteNOW Cards, affirmation cards for writers that help build a productive and positive writing practice. When not writing contemporary fiction, Frankie shops for vintage clothes, dances to 70s disco music and chases her two young sons around Amsterdam.
Find Frankie on Facebook, Twitter, Instagram, Pinterest, and Google+.
LJUBLJANACITY GUIDETRAVELEUROPE
Next
A Diary of Motherhood: Year One, Week Two

Previous
A Diary of Motherhood: Year One, Week Four
Posts you may also like: