Book Review: The End of the Affair by Graham Greene 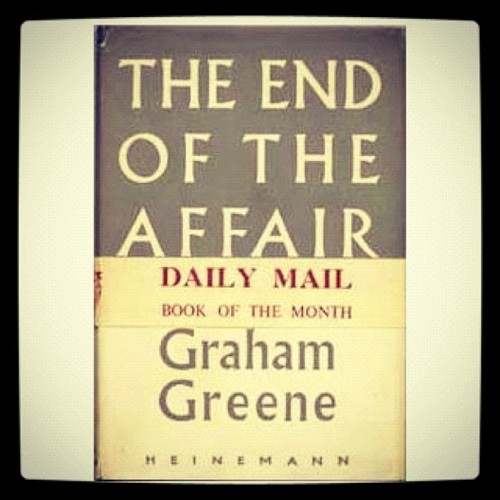 It is predictable yet still slightly ironic that my affair with Graham Greene, a mostly one sided relationship based on lustful literary appreciation, begins with his arguably most famous novel The End Of The Affair.

This is the first book I've reviewed that I actually read on my Kindle and so I struggled to find a suitable photograph but I think this one of the first edition found on the book's Wikipedia page suffices? It was via Wikipedia and other sources that I found out that Mr Greene was a life time traveller, which obviously added a bit of spice to our affair given my current nomadic status.Before I get into the review (I do struggle to keep it short and sweet don't I?),

I'd just like to disclose the reason that I haven't read Graham Greene sooner. It was the classic book, cover, judging scenario. My parents house a number of orange backed Greene novels and as a teenager I thought any book with an orange back or a penguin symbol was old, boring and uninteresting; not at all suited to me. It was only thanks to colourful reissues that I stumbled upon and enjoyed Jane Austen and Thomas Hardy as a young adult. Ten years on and I lust after old, orange backed Penguins, the older and mustier smelling the better. How we learn from our mistakes.

Anyway back to Sarah, Maurice and Henry...

What's it all about?   Centred around three main characters, with Maurice Bendrix ("Bendrix") as the first person narrator, The End Of The Affair begins essentially near the end of the story as well as after his affair with Sarah, Henry's wife, was ended by her. After a chance meeting with Henry, Bendrix ends up so consumed with love and/or hate for Sarah that he becomes almost obsessive and destructive; as the story progresses to new events, through Sarah's troubled thoughts and Bendrix's reflections on the past, Greene introduces a much larger theme, religion, to be debated by all three characters and the reader.

What's so good about it? This book is very readable thanks to Greene's fluid but directly poignant writing style; though over 60 years old the story, set in London, feels very modern and handles issues still up for discussion in our own every day lives.

Who, me?  The chances are you've read and are familiar with Graham Greene's work but if not I would strongly suggest you give it a go so you join me in kicking yourself for not doing it sooner. Though I base this on one book and an hour's research online into his background and other novels, it strikes me that Greene has a broad an appeal as any author so I'd be surprised if there wasn't a story of his for you too.

(Please note any links to Amazon are through my Amazon Associates account which means I make a little money from any purchases made from clicking through this link. Thank you please.)

Londoner turned wanderer, Frankie is an author, freelance writer and blogger. Currently based in Amsterdam, Frankie was nomadic for two years before starting a family with her Australian partner. Frankie is the author of three short story collections, and is a freelance writer for travel and creative brands. In 2017, she launched WriteNOW Cards, affirmation cards for writers that help build a productive and positive writing practice. When not writing contemporary fiction, Frankie shops for vintage clothes, dances to 70s disco music and chases her two young sons around Amsterdam.
Find Frankie on Facebook, Twitter, Instagram, Pinterest, and Google+.
BOOK LOVE
Next
Travel: Review of Big Bus Tours of London
Previous
Book Review: Blue Shoe and Happiness by Alexander McCall Smith
Posts you may also like: