I have had some nice feedback about the Short & Sweet Book Reviews featured on this blog and so have decided to do Short & Sweet Hotel Reviews too seeing as I find hotel/accommodation reviews not always easy to write at length. (Do you really want to know how plump the pillows were? Is it necessary to share whether the selection of complimentary bathroom toiletries were adequate? I didn't think so.)

It is bizarre then to start this feature with a Short & Sweet Review of one of the biggest hotels on the planet. Marina Bay Sands Hotel, Singapore, is big in both reputation, stature and size. For this reason, allow me more than a few sentences.
What's it all about?   A quick Google search for "Marina Bay Sands, Singapore" should go some way to explain the borderline phenomenon that is this hotel. Unsurprisingly for its scale, style and overwhelming proportions the resort, of which the 2561 room hotel is only a part of, was pioneered at a cost of $8billion US by Las Vegas Sands, the company behind Las Vegas mammoth hotels The Palazzo and The Venetian as well as the Sands Expo Centre.

After a delayed four stage (!) opening took place throughout 2010, the hotel has reportedly been full most nights since December 2010 and this certainly seemed the case during our stay, though there was also a constant flow of tourists marvelling at the architecture and in particular the Skypark viewing area up on the "top deck" of the hotel which also features a guest only swimming pool 57 storeys high overlooking Singapore.
What's so good about it (or not)?   Considering the hotel's capacity and its busy and regular flow of 1000s of guests and visitors Marina Bays Sands hotel maintained an excellent level of customer service throughout our stay. Huge numbers of incredibly polite staff are visible and accessible, but are not overwhelming.

However, the people traffic and large open and occasionally artificial sense of the internal architecture and design does make the hotel feel more "busy international airport" than "R&R". This also goes for the swimming pool. Though access is for hotel guests only, the breathtaking infinity pool stretching out for the best part of 50 metres (or more) giving awesome views of Singapore's skyline is for the most part always busy and nearly always made us feel as though we were in a fishbowl (with the non-guest visitors lustfully looking on) and I'm fairly confident that NewMan and I will now be featuring in hundreds of photographs as the majority of fellow guests are of the uber snap-happy variety. It baffles me that someone would rather enjoy a view from behind a camera lens rather than once, maybe twice using that camera lens to capture your enjoyment of a view.

Getting an alarm call for 6 o'clock in the morning is well worth it to enjoy the peace and quiet and a dramatic sunrise from the pool, though I can guarantee by 7:30 it will be busy and you'll have to strike a pose for other peoples' photographs. (Hence I tried to keep our photos minimal and just of us!) 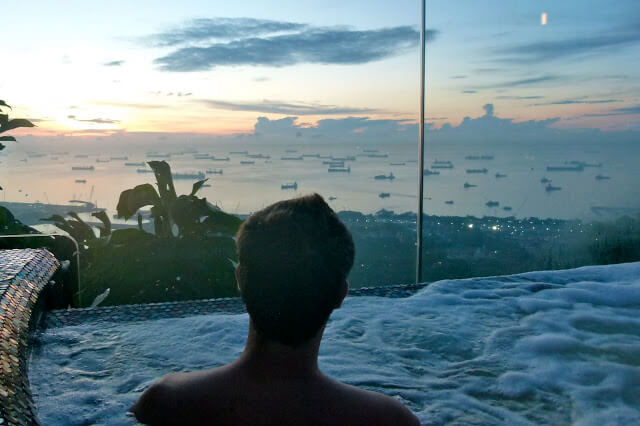 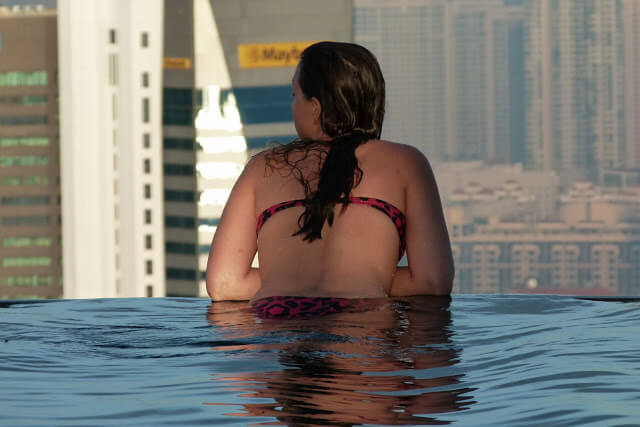 Who, me?  Do not be disillusioned; a night in Marina Bay Sands hotel does not come cheap and it is even more expensive (by $50 SGD, £25.00, a night) when you want a view of Singapore city as opposed the Singapore Strait, which isn't dissimilar to a huge car park for huge ships. However, if you luck out and get a high enough the view of the ship car park it isn't so bad, particularly at dusk as you can watch one by one the ships switch their lights on (NewMan liked to guess which one would be next - simple things...).

The other bonus of being high up is that you are further away from the ongoing construction work which is apparently building extensive conservation gardens similar to the Eden project just in reverse, i.e. the domes will be cool and will house plant and animal life from non-tropical forests - so basically Sherwood Forest is being recreated on its doorstep. 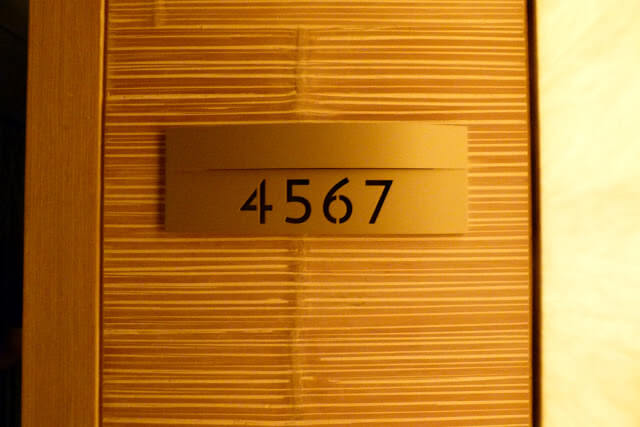 If honesty is best policy this is the moment where I mention that we did indeed luck out. Because we had to wait for our room to be ready (for two hours drinking beer by the pool so no hardship!) we were upgraded from the cheapest possible standard of room (that's us!) to a Club Room on the 45th floor, effectively a triple upgrade.

In line with best policy I must also add that I'm not sure our visit would have been as "comfortable" had we not been so high up and not been in a room bigger than my flat in Shepherd's Bush. That said, Marina Bay Sands is still an experience and if Vegas style complexes, airport style architecture and Dubai style extravagance is your kind of experience then your money will be well spent staying here. If alternatively you prefer a more intimate or rugged experience, are uncomfortable with OTT resorts or if you like to keep a low profile as maybe you're on the run from the law, then my advice is to save your money and your face from being in half of Asia's Facebook profiles.

Londoner turned wanderer, Frankie is an author, freelance writer and blogger. Currently based in Amsterdam, Frankie was nomadic for two years before putting down some roots with her Australian partner and having a baby boy in July 2015. In 2017, she launched WriteNOW Cards, affirmation cards for writers that help build a productive and positive writing practice. When not writing contemporary fiction, Frankie shops for vintage clothes, dances to 70s disco music and chases her son around Amsterdam.
Find Frankie on Facebook, Twitter, Instagram, Pinterest, and Google+.
SINGAPOREHOTEL REVIEWSOUTH EAST ASIATRAVEL
Next
Book Review: The Story of Tibet - Conversations with the Dalai Lama
Previous
Travel Inspiration: For the record...
Posts you may also like: 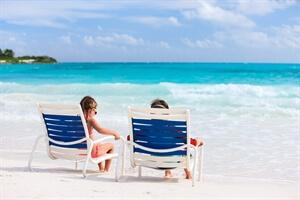