I have so many photos and so much I want to say about the canal parade at Amsterdam's Pride, which we watched at the weekend. I went from feeling very excited to very emotional to very happy at various stages as we watched the floats pass us and turn from Prinsengracht on to the Amstel. I'm going to keep the politics as succinct in that I believe politically, philosophically, and as a human, that love is love is love is love, and Pride is a brilliant advocate for this. I hope the photos show just how much I applaud, enjoy and admire this event.

It seems Amsterdam agrees with me as Pride, and particularly the canal parade through the centre of Amsterdam, is the city's biggest party, with the possible exception of King's Day, though I suspect many would challenge me on this.

Below you will find my photos from the Amsterdam Pride canal parade in 2013, with some personal thoughts and musings. Then you will find some helpful tips for planning your day watching the parade from a good spot, depending on what you hope to get out of the day. While I believe Pride has something for EVERYONE, the party (and LOUD!) atmosphere may not be for everyone (i.e. if you don't like crowds or if you have very young children or need accessibility assistance) so also bear that in mind. While my photos are a little old now, these tips and advice for watching the Pride canal parade are up to date as of summer 2018.

We were chatting with our new neighbours a few days before the canal parade took place and they asked us if we were going to go and watch it. We said yes, but that we'd been to Pride in London before so we sort of knew what to expect.

"Oh, it's different in Amsterdam," she said.

I'm not sure if it was the canals, the boats or the floats, but she was right.

Pride is a wonderful worldwide initiative - one of the best, in my opinion, for fighting its cause. Even the name says it all; it's empowering, inclusive and uniting. We should all be proud of who we are. We should all be proud to love the person we love. Why do I deserve to have that right more than anyone else because I am able-bodied, white and heterosexual? I don't. And Pride reminds me of this.

Of course, it's also a great big party. And if a city knows how to party, it's Amsterdam. We saw some incredible examples of this city's community sharing and celebrating the day. (And we also some examples of drunken stupidity and I was very impressed how well the police and organisers managed this with tolerance and "safety-first" attitude, rather than heavy hands.) Pink is Pride's colour in Amsterdam. Hundreds, probably thousands, of people were wearing pink everywhere we looked. I felt bad for choosing a yellow dress when I had a perfect pink one back in my wardrobe. Next year...

Half way through the parade, somewhere in between the Dutch Police's "Roze in Blauw" float and the Amnesty International float that protested directly against Putin and Russia's recent disgusting behaviour, NewMan turned to me and said; "How are we in 2013 and people are still having to fight this?" I couldn't have said it better myself.

One day I hope Pride can stop being a fight and is about nothing but pure pride. And a bit of a party too.

Below are a few tips to help you watch the canal parade safely, and to get the most out of Amsterdam Pride.

And if you'd like some more tips or advice for planning your visit to Amsterdam, check out these posts:

The Best Time to Visit Amsterdam

Best Things to do in Amsterdam in Summer

Where to Stay in Amsterdam: Neighbourhood Guide 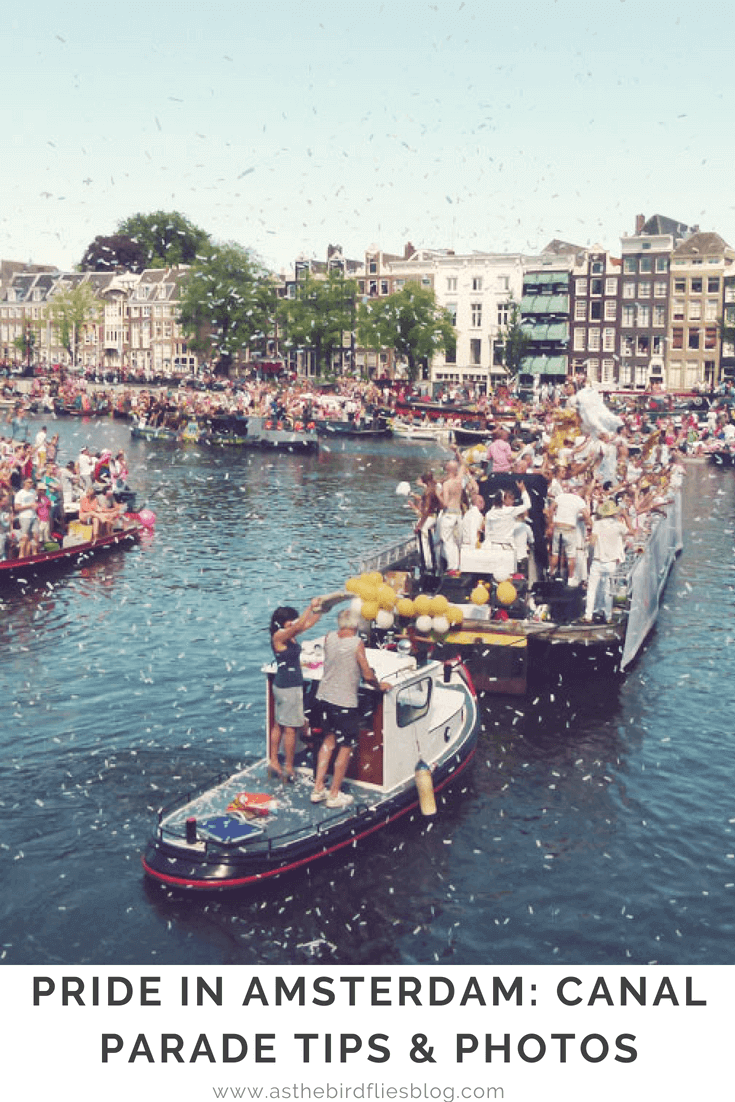 Londoner turned wanderer, Frankie is an author, freelance writer and blogger. Currently based in Amsterdam, Frankie was nomadic for two years before starting a family with her Australian partner. Frankie is the author of three short story collections, and is a freelance writer for travel and creative brands. In 2017, she launched WriteNOW Cards, affirmation cards for writers that help build a productive and positive writing practice. When not writing contemporary fiction, Frankie shops for vintage clothes, dances to 70s disco music and chases her two young sons around Amsterdam.
Find Frankie on Facebook, Twitter, Instagram, Pinterest, and Google+.
TRAVELTHE NETHERLANDSAMSTERDAMIN PHOTOS
Next
Self-Publishing: Beginner's Guide & Checklists
Previous
Shy Feet Now Available as a Paperback
Posts you may also like: