It's hard to write about my first impressions of an area of France I have visited many times. One of my best friends lives and works here and it's where NewMan and I have spent summer holidays in the previous two years. It's a place that I've always wanted to spend an elongated period of time and so when we decided to give this travelling lark a go, it was destined to feature on our list of places to spend an elongated period of time in.

And yet I have formed some interesting first impressions based on our journey by car through the east of the country and there are other factors at play influencing the emotions I'm feeling at the moment.

We entered France at the Luxembourg border and drove through the almost German or Swiss looking Lorraine region of the country before cruising alongside some industrial looking champagne houses as we dipped through Champagne-Ardennes. We then plummeted into and down through the middle of Burgundy. Here is where I noticed the sunflowers who were part way through their daily ritual of turning up to face the blazing sun, which we also noticed was getting warmer and warmer as our journey progressed. Only a few hours later the sunflowers in Rhone-Alpes were awake and smiling openly upwards. By the time we made a stop on the cusp of the Languedoc-Roussillon border to stretch our legs at a motorway services (which are romantically called "Aires" in French) we knew we were getting exactly what we asked for by heading south; hot, hot, heat.

It was also as we drove virtually the full depth of Languedoc-Roussillon that I realised how much France had come "undone" by this point. From the solid, square houses and grey roofs in the north of the country we were now driving past chalkier, cream and stained town and farmhouses topped with orange roof tiles. Though their shutters were more elaborate and mediterranean in the detail that decorated the fronts of terraced townhouses, they appeared more run down, more tarnished by the heat and dirt that is found in the south.

Ah the heat and the dirt. These are the real reasons I love the south of France.

If you ask me to choose between Marseille and Paris, I'd choose Marseille any jour of the semaine. Because I like dirty cities. Admittedly not dirty cities that make me sick, like Jakarta, but I do prefer my cities, towns, houses and architecture to bear the tell-tale signs of being well-worn, well-loved, well-lived in. I admire the endurance of places.

And the heat. I'm sure it comes from childhood holidays under France's sun but I love the weather in the south of France. In fact, I think it's hard to beat a mediterranean climate; those long warm evenings, the (usual) lack of humidity, a sun that slowly but surely warms up the sea. That said, it's shocked me how hot it is here right now. It's been three days since our arrival and we've been rendered useless by the unforgiving heat which rarely stoops below 27 degrees, even at night. This has been a challenge to say the least as we're currently house-hunting.

August here is also a different story and I now know why I've always visited my friend who lives in Narbonne (and who we're staying with) at the end of the month or in September. Yesterday we headed in search of a cooling sea breeze at the beach of Narbonne-Plage but instead were confronted with hoards and hoards of French holiday-makers crowding the sand close to where the cool blue sea lapped ashore. Shocked by the noise and the borderline chaos this brought we retreated quickly home.This part of France is a fascinating contradiction to me with so many hints of "la bonne vie" for foreigners - the weather, the beaches, the food, the wine (oh yes, the wine is another reason we're here) - but yet we've already come up against a few obstacles to us enjoying this in the longer term - cars are far from cheap to hire yet are very necessary to get around, furnished rental homes are incredibly hard to come by, are terribly decorated (1970s campagne-chic anyone?) and much more expensive than we ever imagined. And yesterday we literally hit a brick wall when we naively walked in to a mobile phone shop to buy a SIM card, which would simply give us 3G data as well as calls and texts, to paraphrase the Little Britain sketch "l'ordinateur dit non" .

And then there's the language. I studied French at Uni, can navigate my way through French Vogue with ease and I know all the words to francophone rapper  , but yet I have become utterly tongue tied down here. This is partly because of the dialect and accent but is mostly due to my gaping lack of confidence, which rather than shrinking away the more I speak, the void continues to grow as I'm verbally left battered, bruised and silent by unhelpful phone shop assistants and real estate agents.

During our 8 hour journey driving through the country, I watched France become undone and unwind more and more as we drove south I felt excitement and nerves in equal measure. Surprisingly, now that we've been here a few days, these emotions haven't left me. I'm excited that we'll have so many fun times here where I'll be hopefully just minutes away from a friend of mine who I don't see often enough, but I'm also anxious that it's not going to work out as we couldn't have picked a worse time of year to find a short term let... 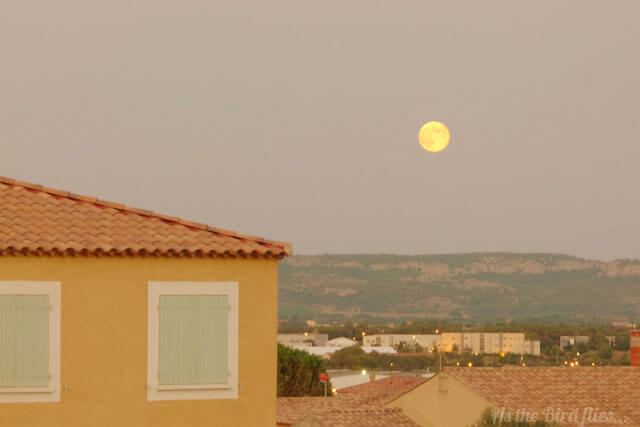 There has been a big moon hovering over our heads at night since we arrived in Narbonne. I've heard that some people believe that full moons have special powers and that strange things happen when they appear. There is ambiguity in this and I daren't research further whether the powers are good and bad, and whether I should believe that they'll help or hinder us in our current quest to make the south of France our home for a while.

As with all things, only time will tell...

Londoner turned wanderer, Frankie is an author, freelance writer and blogger. Currently based in Amsterdam, Frankie was nomadic for two years before starting a family with her Australian partner. Frankie is the author of three short story collections, and is a freelance writer for travel and creative brands. In 2017, she launched WriteNOW Cards, affirmation cards for writers that help build a productive and positive writing practice. When not writing contemporary fiction, Frankie shops for vintage clothes, dances to 70s disco music and chases her two young sons around Amsterdam.
Find Frankie on Facebook, Twitter, Instagram, Pinterest, and Google+.
FRANCENARBONNEFIRST IMPRESSIONSTRAVEL
Next
Canada Travel: First Impressions of Montreal
Previous
First Impressions: Toronto
Posts you may also like: