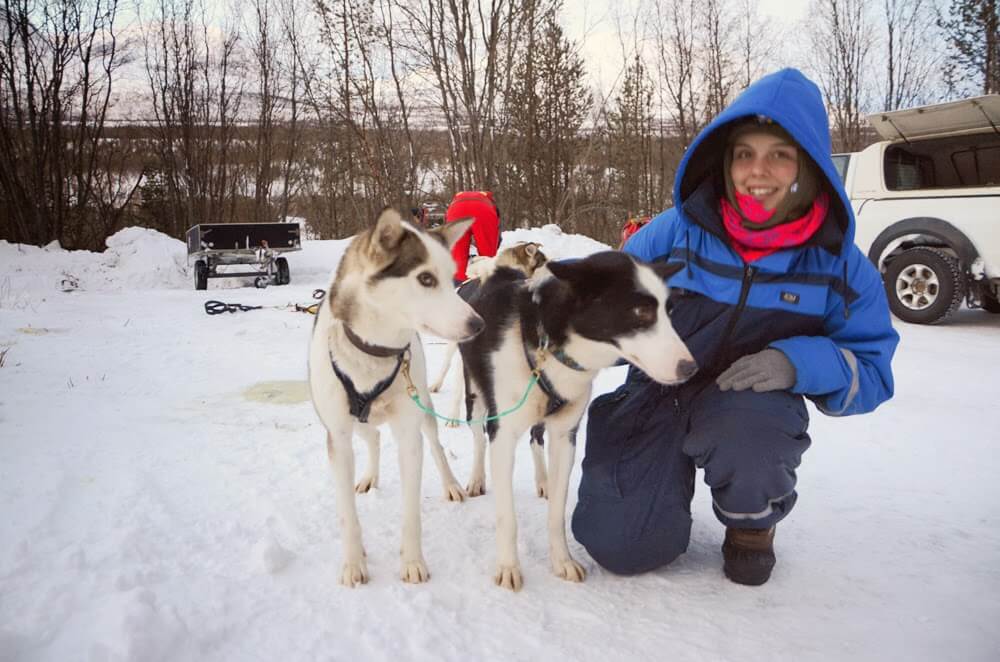 The morning of our first sledding expedition, myself and Emma - another journalist on the trip - were given a piece of paper. On it were five names and a number of other letters and scrawlings that would come to mean something soon.

The names were Pacha, Nuka, Nalla, Snow White and Lulu.

Upon first sight, they meant nothing to me, but that wasn't to last. Now they each meaning something very individual and very special. I'll try to share these feelings with you...

Pacha and Nuka stood up front; they are the leaders.

Alone and in the middle was Nalla.

And at the back, closest to the driver - that's me! - was Snow White and Lulu.
Over the next five days I got to know these dogs very, very well. 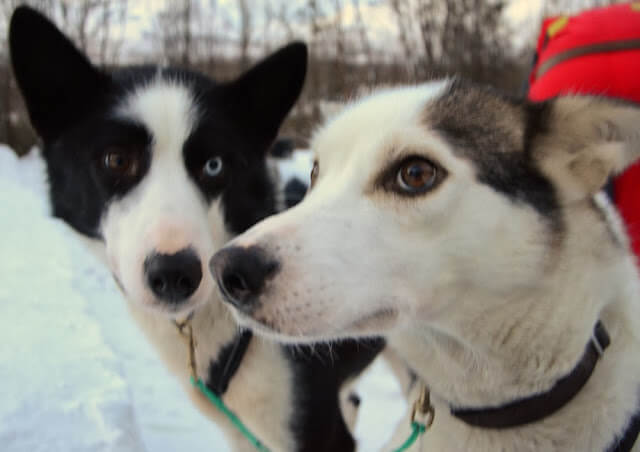 Pacha was the only male in our group and on occasion it showed. His bark was louder, his pull a little stronger and his mad stare, just before we set off, was deepened by his different coloured eyes; one ice blue and the other a rich, chocolate brown. He was consistently full of energy and always tugged the hardest to get in the trailer and get on his way to wherever the training was going to take place. He reminded me of the border collies I have met, the ones who never tire running for that stick or ball, no matter how far or how many times you throw it. He was a good dog who handled being in the company of four women (six, including us!) very well - in fact, do you know what? I think he rather enjoyed it. (See below...) 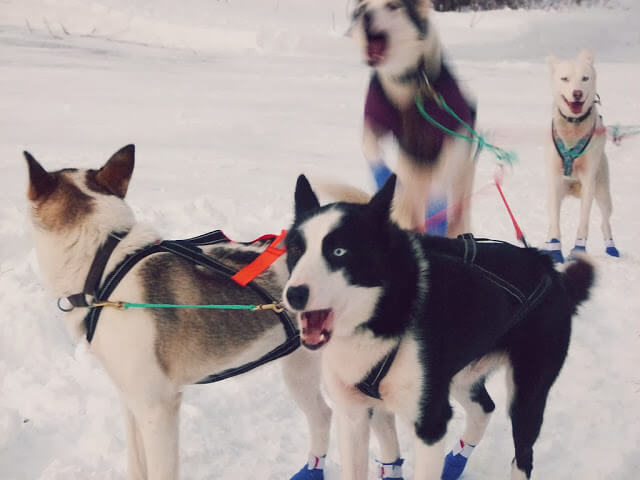 His companion up front was Nuka. It's a little sad on my part that I assumed Pacha was the real leader in our group of five, but in fact, this was Nuka. An amicable fair female dog who like all the others was always eager to pull. But on my second day sledding with the pack - this time on my own - she showed a different side to her, choosing to go her own way a few times when the course opened up and she could see head dog-musher Stian - the real leader of the whole pack - up ahead. Stian's partner Nieske explained that Nuka has completed both the 500km and 1000km long Finnmark races and when she wants to be she's one of their best leaders... "When she wants to be..." It was emphasised more than once. Although it caused me a few problems on that second day of sledding, I found I was able to related to Nuka because sometimes I have days when I just want to do what I want to do too. 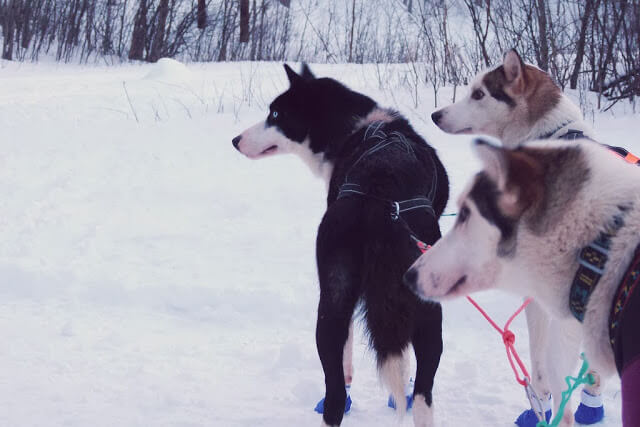 In the middle was Nalla, Nuka's sister and Pacha's girlfriend. Yep, that's right ladies and gentlemen, we had a full-on soap opera-style husky love triangle going on up front... Except it actually wasn't. Nuka and Pacha live together, sharing a small area and spacious kennel, and they are visibly very close. This evolved, apparently, because Nuka is the only one who can keep up with Pacha's playfulness. Besides, when you position the three of them in such a way that Nuka is chasing after both their tails and able to keep a close eye on them both, well, that seemed to keep trouble at bay. Nalla was passionate about running, patient with Emma and I, but very loyal to Nieske, who has had her since she was a puppy. I also liked how she ran ever so slightly sideways, perhaps not helped by her lack of a running partner.

At the back were Lulu and Snow White... two dogs with almost polar opposite personalities - Lulu being forth-coming and loud, while Snow White was painfully shy and scared - and it was these two dogs who had the most profound effect on me.
Snow White is one of three siblings who were still relatively new to Stian and Nieske. She was all-ivory - hence the name - with small blue eyes and despite visibly being petrified of human contact, she still had a slightly strange permanent smile on her face. Snow White and her siblings - Jack and Dopey - are all the same - reluctant to come anywhere near humans and quick to cower in a corner if you approach them. However, for all her fear of people, Snow White was a natural husky dog - always eager to pull and to run as fast as she possibly could. On the first day sledding as Emma and I were still learning how to assemble all the kit and also take our dogs to the trailer for transporting, Amalie, Stian and Nieske's "dog handler" assistant, advised us that Snow White would need to be carried and so she showed us how to do this safely. 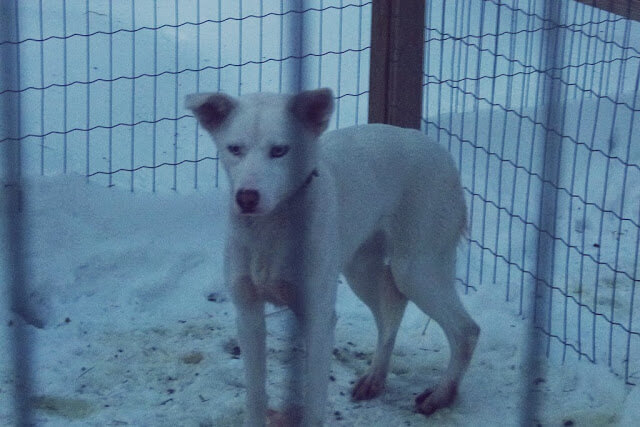 We followed and watched and I felt my heart sink a little at Snow White's anxiety. "She's getting better," Amalie reassured us. "We just need to keep working with her..." Still learning, Emma and I then took it in turns to drive the sled while the other sat and watched.

When we were back at the cars and tasked with taking the harnesses and "booties" off the dogs, Snow White let us do this, standing perfectly still. Emma then walked her to the trailer and she didn't even need to be lifted in.

"That's amazing..." Amalie said and we knew that Snow White had turned a small corner. It was very moving to be part of that. 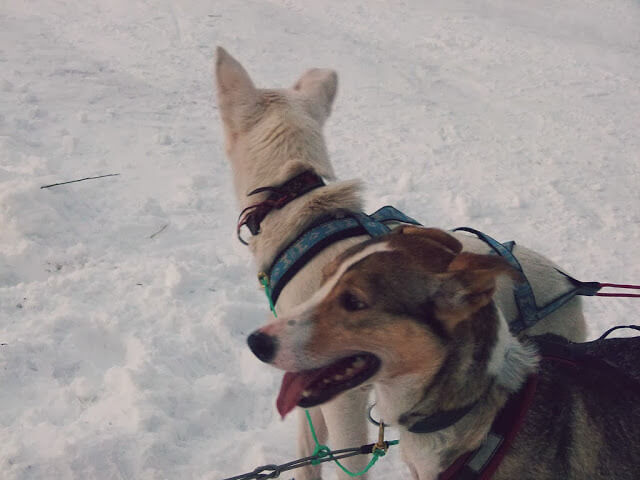 And then came Lulu.

Well, if I helped Snow White, then Lulu helped me.

On my second day of sleddding, when I was tasked with "driving" our five husky dogs deeper into the national park for over three hours all by myself, there was a point when I very felt out of my depth. We were breaking a trail through fresh snow that if I stepped off my sled onto, I would sink into thus risking coming off my sled and would then get dragged along, because the number one rule in dog-sledding is NEVER LET GO. Every now and again I did this (you have to in order to help the dogs up steep climbs) and I thought I was going to fall, plus there were small rocks appearing up ahead and didn't want the sled to mount these and tip over. Although nothing really happened and I NEVER DID LET GO (and so somehow managed to pick myself up again) I was becoming increasingly stressed out by it all. I was concentrating so hard on making sure I didn't make a mistake I was starting to not enjoy what was previously a wonderful experience unlike any other I'd had before. 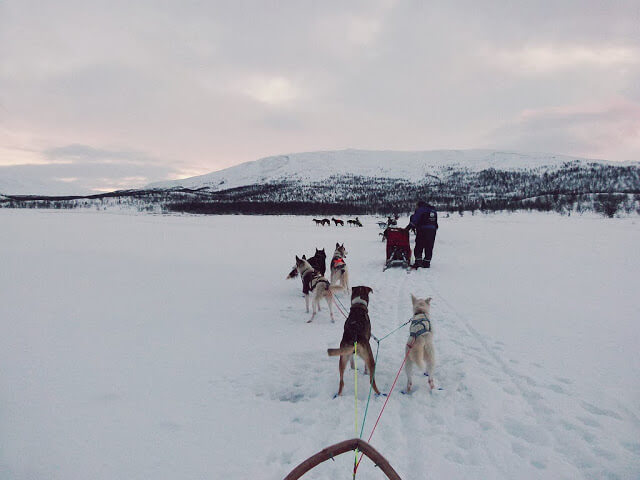 That was when I started to notice Lulu. She was looking back at me. She, with the pinned back ears and long, lean lurcher-like legs. She kept turning her head and checking on me.

"Are you alright? What are you doing back there?" She seemed to ask.

"It's okay, Lulu," I whispered to her, though of course she wasn't the girl I was talking to in that moment. "I'm okay."

"I know you are. Now hurry up and get happy. I want to go faster..." She turned again, her tongue hanging out of her mouth.

I've learned since that Lulu has a habit of turning around to look at the driver, so of course she wasn't really trying to have a conversation with me. But that doesn't seem to matter now.

Later that day, Emma and I got to stand in the fenced off yard area and enjoy play time with some of our five dogs and others. Lulu bolted into each of us, head first, nose out-stretched, begging for a scratch, a pet or maybe just a sign. When no-one was looking I rubbed my forehead against hers and I thanked her for looking back at me. She jumped up as if to say "Pack it in you softie...", with a gentle headbutt before running off to chase the ball that Pacha and Nuka were fighting over, and this time she didn't look back.

You can read Chapter One of my dog-mushing stories from northern Norway here. Next week, I'll share the third and final chapter of this experience, about travelling outside my comfort zone and the lessons I took home.

Disclosure: My dog-mushing adventures were supported by Magnetic North Travel who run  these unique dog-mushing tours. For more information visit their  website and if you have any questions about the tour (or any of their other arctic adventures), I know they'll be happy to answer them.

All photos by Frankie except Frankie with the dogs and the Pacha and Nuka close up by Emma Sleight.

Londoner turned wanderer, Frankie is an author, freelance writer and blogger. Currently based in Amsterdam, Frankie was nomadic for two years before starting a family with her Australian partner. Frankie is the author of three short story collections, and is a freelance writer for travel and creative brands. In 2017, she launched WriteNOW Cards, affirmation cards for writers that help build a productive and positive writing practice. When not writing contemporary fiction, Frankie shops for vintage clothes, dances to 70s disco music and chases her two young sons around Amsterdam.
Find Frankie on Facebook, Twitter, Instagram, Pinterest, and Google+.
ADVENTURE BIRDIETRAVELTRAVEL STORIESDOG-MUSHINGNORWAYARCTIC CIRCLE
Next
52 Books in 2014: January's Books
Previous
A Poem: Snowshoeing Through Life
Posts you may also like: