A photo from... The Royal Pavilion, Brighton 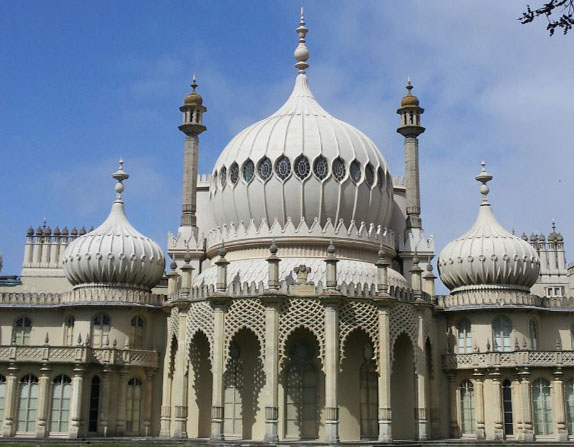 For those of you unfamiliar with Brighton & Hove, an English city by the sea on the south coast of the country, the exoticness of this building may surprise you. It still surprises me and I've seen it many times in my lifetime. But aside from being eye-catching and memorable, it also sthe perfect introduction to the elaborate and extravagant age of Regency architecture that Brighton is famous for.

As part of a little research into this building I found the following things fascinating:

1. The Royal Pavilion was built for King George IV, the man for which Brighton has much to be grateful thanks to his love of the city, which began when he was Prince Regent and was advised to seek healing qualities of Brighton's sea water. Instead he made the Royal Pavilion and Brighton one of many places he would get up to the scandalous past times he enjoyed; drinking, womanising and gambling.
2. Queen Victoria disliked the "uncomfortable" foreignness of the Royal Palace so much that she sold it to the city during her reign. Thankfully Brighton & Hove liked it considerably more.
3. During World War I the Pavilion was used as a hospital for soldiers from India. I don't know why but I wondered if they found this comforting considering the domes and points of the Pavilion's character appear more traditionally Indian than British. I'd like to think so

I also think it looks rather beautiful under a blue sky, don'tcha think? 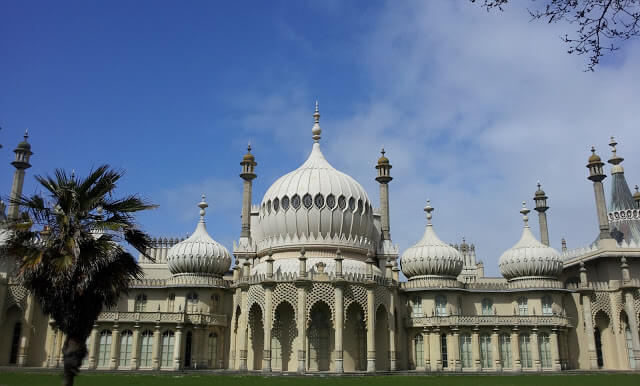 A busy weekend at Traverse stretches ahead of me. I'm hoping for sunshine, making new friends and no nerves when my turn to talk comes. Wishing you a relaxing and happy weekend!

Londoner turned wanderer, Frankie is an author, freelance writer and blogger. Currently based in Amsterdam, Frankie was nomadic for two years before starting a family with her Australian partner. Frankie is the author of three short story collections, and is a freelance writer for travel and creative brands. In 2017, she launched WriteNOW Cards, affirmation cards for writers that help build a productive and positive writing practice. When not writing contemporary fiction, Frankie shops for vintage clothes, dances to 70s disco music and chases her two young sons around Amsterdam.
Find Frankie on Facebook, Twitter, Instagram, Pinterest, and Google+.
BRIGHTONUNITED KINGDOMA PHOTO FROM...TRAVEL
Next
In photos: A rainy day in Brighton
Previous
MusicMonday: Spanish Joint - D'Angelo
Posts you may also like: