Travel Stories: Why do the English hate the French?

As NewMan and I went through security at Stansted Airport a few weeks ago, mentally preparing ourselves for all the "joys" of another Ryanair flight, a member of the airport staff, who'd chosen to go through my bag, asked us where we were headed.

"South of France," I replied with an excited twinkle in my eyes."Hmm, not for me that," He shook his head at me and sucked air through his teeth.

"I hate France, the French, them over there. Never liked them,"

"Really?" NewMan asked innocently, looking at him and then at me. I smiled to myself knowingly.

"Yeah, can't stand the bloody French. Would never go there on holiday,""Well, we have friends there so it's just as well we don't mind France. Plus it's warm," I tried to avoid any further racism.

"Yeah, each to their own though innit," He sniffed. "Right here you go love, you can take your case.""Merci monsieur," I nearly said, but instead I thanked him smiling sweetly before waltzing off into the terminal with a confused NewMan.

"Why do the English hate the French so much?" NewMan asked me as he held my hand tightly in a vain attempt to keep me on the straight and narrow, i.e. away from the duty free perfume shop.

Ah bless NewMan, who fell so innocently head over heels in love with France last year when we visited my good friend Robin who was then living near Perpignan. And if you look at it objectively why shouldn't he have fallen in love what with the food, the wine and the weather on offer en France?

The trip we've just returned from has certainly done nothing to change NewMan's mind or indeed mine, as I have long loved going on holiday in France. From the camping trips my family did when I was a child to the school exchanges learning French as a teenager, from the time I've spent in the French Alps learning and loving snowboarding to that very boozey and foodie trip last year, you can't really argue with France being an ideal holiday destination.

On this occasion we spent a handful of nights staying with Robin and his boyfriend, who are now living together, near Narbonne before spending two nights in a beautiful chateau hotel just north of Carcassone. As I'm hoping to turn this into a "proper" travel blog I will do a review of the hotel separately. Aside from a day trip to a lovely beach in northern Spain (again, I may review separately) we mainly sunbathed, swam, ate and drank. Oh and blew up lilos. 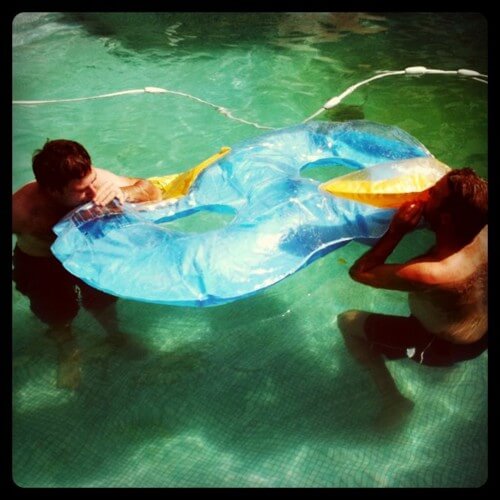 And going back to our conversation in Stansted airport and NewMan's question "Why don't the English like the French?" all I could do was turn to him and say : "Je ne sais pas pourquoi,".

Londoner turned wanderer, Frankie is an author, freelance writer and blogger. Currently based in Amsterdam, Frankie was nomadic for two years before starting a family with her Australian partner. Frankie is the author of three short story collections, and is a freelance writer for travel and creative brands. In 2017, she launched WriteNOW Cards, affirmation cards for writers that help build a productive and positive writing practice. When not writing contemporary fiction, Frankie shops for vintage clothes, dances to 70s disco music and chases her two young sons around Amsterdam.
Find Frankie on Facebook, Twitter, Instagram, Pinterest, and Google+.
FRANCENARBONNEEUROPESPAINTRAVEL STORIES
Next
In photos: Australia Day in Melbourne
Previous
Travel Inspiration -Travel with Purpose: Write About It
Posts you may also like: