“For surely a king is first a man. And so it must follow that a king does as all men do: the best he can.”  - Cameron Dokey, The Storyteller's Daughter It's impossible to not have fun on King's Day, formerly known as Queen's Day . Unless of course you don't like the colour orange or crowds or people partying in the middle of the street for no special reason.

My brother was in town and we began our day with beers and backgammon. Then we went on a quick cycle around the area to see the vrijmarketen (free markets) and to get cash (ALWAYS get cash the day before or you'll spend forty minutes queueing like we did!) before we joined the street party for a few hours on Utrechtestraat. We headed home while we could still ride our bikes for a BBQ with neighbours and friends. For me, that's a perfect day, and if I have to wear orange and do it in the name of the Dutch King, well so be it.

I feel like King's Day is the start of a new season in Amsterdam.. I wouldn't go so far to call it summer because that's just wishful thinking or very naive of me, but it's certainly the start of a season in which the city stops and celebrates or comes together. Shortly after King's Day, on May 5th Liberation Day in Amsterdam happens, bringing more solemn and significant celebrations, and for me coming from a country that didn't experience occupation and liberation during the war, I"m always quite touched by this day. Then - finally - the weather does start to turn and more boats fill the canals and more bodies line the outdoor terraces of bars, restaurants and cafes... So while most are celebrating King's Day because of national pride, a love of orange or just because they've got the day off work, I'm there celebrating the start of a new season - a season I love in Amsterdam. 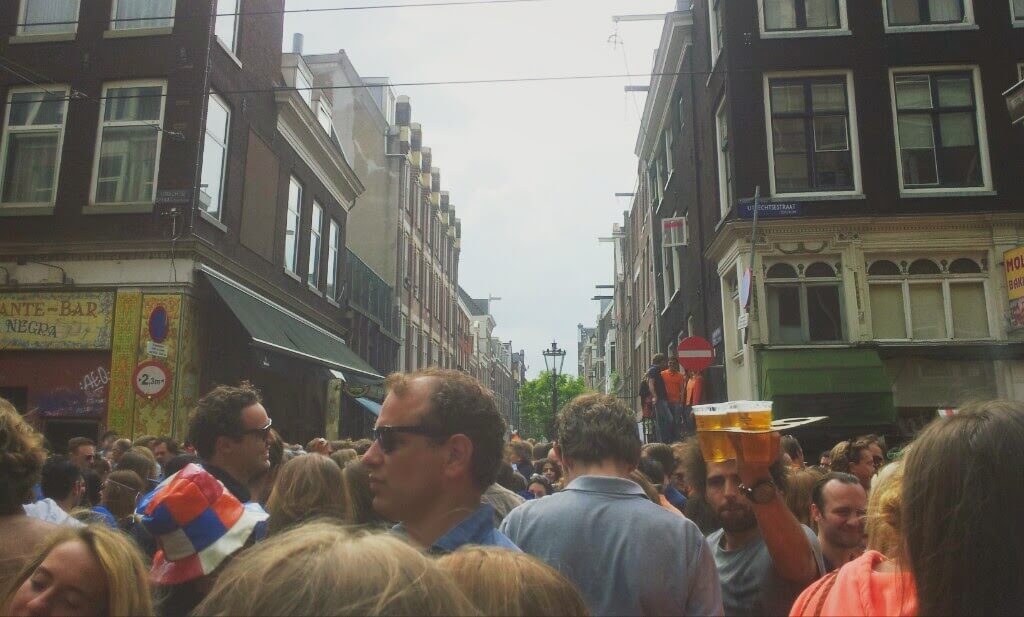 And you see those brackets? Do you know what those brackets mean? They mean we may be in Amsterdam for King's Day (2015). I don't know... It's like we're staying or something?

Londoner turned wanderer, Frankie is an author, freelance writer and blogger. Currently based in Amsterdam, Frankie was nomadic for two years before starting a family with her Australian partner. Frankie is the author of three short story collections, and is a freelance writer for travel and creative brands. In 2017, she launched WriteNOW Cards, affirmation cards for writers that help build a productive and positive writing practice. When not writing contemporary fiction, Frankie shops for vintage clothes, dances to 70s disco music and chases her two young sons around Amsterdam.
Find Frankie on Facebook, Twitter, Instagram, Pinterest, and Google+.
THE NETHERLANDSAMSTERDAMEUROPEIN PHOTOSTRAVEL
Next
In photos: World Press Photo in Nieuwe Kerk, Amsterdam
Previous
In photos: A visit to Český Krumlov
Posts you may also like: