Amsterdam Travel: A Short History of Cycling in the Netherlands

Why is cycling in the Netherlands such a big deal? (Or not.)

I'll admit it. Before I came to live in Amsterdam, I thought that cycling in the Netherlands and the Dutch cycling culture was a bit of a novelty, like they all just got on bikes and paraded around me just when I was in town. It was the ultimate tourist attraction! And when I was tucked away out of sight in my temporary home in Amsterdam's Old West I half assumed they all abandoned their bikes and walked to work or jumped in their cars to pick up their kids from school.

I failed to grasp that cycling is not a cliche here. Cycling in Amsterdam and all over the Netherlands is a deep-rooted tradition that is almost more ingrained in their psyche that you can't really even call it a cycling culture. It's almost nature to the Dutch.

Riding a bike is as much part of Dutch daily life as cleaning your teeth or walking the dog, i.e. it's not a big deal. In fact, it's not even a deal. It's just done.

It follows that you'd expect that it's always been this way. I certainly was expecting Amsterdam's museums to be full of photos and paintings of the Dutch cycling through the last one hundred or so years since the bike became a popular mode of transport for the masses. Not so. The cycling infrastructure in the Netherlands that it's so famous for is actually a fairly recent development in the country's history. Yes, the Dutch have always cycled to an extent but the network of bike paths and the cyclist and pedestrian focused approach to city planning which keeps the country running and as visibly bike-heavy as it is, is actually the proud product of a passionate public campaign back in the 1970s.

A short history of cycling in the Netherlands

Before the Second World War bikes were as popular in the Netherlands as they are now, being a fairly new, cheap and easy way to get around on the beautifully flat Dutch roads largely thanks to the affordable "Safety Bicycle", a bike for the average Joe or Jerone in the Netherlands, and one of the country's first mass produced products. However, back then, there were very few motor vehicles on Dutch roads because they were expensive and inaccessible to the average Dutchman. Cycle paths were built because there was space for them and cyclists went to work, to school, to the shops, to friends' houses, to church by bike. Cycling was slowly but steadily becoming a part of the Dutch way of life...

However, that all came to a grinding halt, as did many other ways of Dutch life.

The Nazi occupation of the country during the Second World War understandably changed the Netherlands in untold ways. I was shocked to learn about was that the occupying forces confiscated peoples' bikes and sent them off to be used by the Nazi troops (there are some brilliant photos in the Dutch Resistance Museum here in Amsterdam of how some Dutchies creatively changed their bikes so they weren't taken away from them, including replacing wheels with those of a moped). Following the end of the War the Netherlands had to rebuild their country under harsh economic constraints. By the time the country was back on its feet mass production motor vehicles were more affordable and very fashionable and as the swinging 1960s rolled around the numbers of cars on the road far outnumbered bikes. Perhaps not surprisingly, as the numbers of bikes on the roads dwindled, the incidents of road related incidents and deaths increased, caused predominantly by the increase of cars on the road.

Aside from a few details, when you read this story it could apply to any number of countries in the post-war motor car boom. More cars on the road meant more deaths and injuries, regardless of how many bikes were being ridden. I can't help but compare it to my native England. A country of people who also loves bikes, but for most cycling is still a hobby or the risk-taking commuter's mode of transport. Unless you live in surely only a few places, getting on your bike is not something people do lightly and certainly not without a helmet or high visibility clothing (unless you're a tough skinned London city cycle courier with nine lives). It's not quite as natural as say cleaning your teeth or walking the dog. In London, where ironically there are reams of bike enthusiasts all lycra-ed up and raring to go, the dangers of cycling are well-known and sadly well-proven with fatalities and serious injuries almost each and every week. I used to cycle in London using the fairly new public bike hire scheme, and once made the mistake of telling my grandmother. She tutted, shook her head and uttered a disappointed "Ooh no, don't do that." as though I'd just announced I was going to take up cage-fighting.

Five years of living in the Netherlands and a little reflection later and it's only now that I question why is it so dangerous for cyclists in London?

Of course, I know why and despite many peoples' attempts to change it I'm not sure if it will ever change.

Yet, things can change.

Things did change in the Netherlands.

Why cycling became so popular (and possible!) in the Netherlands

Road deaths in the Netherlands peaked in 1972 with over 3000 fatalities registered (from a population of around 13 million at the time) and in the following year 450 children were killed on Dutch roads. This was enough to prompt the Dutch public to throw considerable weight, time and money behind a number of campaigns to change the country's infrastructure and approach to motor transport. The most famous of these campaigns was "Stop de Kindermoord" (Stop the Child Killing) and after two years'of peaceful but persistent protesting, the politicians began to listen. By 1980 the country had a cycling infrastructure like no other country. Separate cycle lanes lined virtually every road in the Netherlands and no new roads are likely to be built with consideration to where bikes can be ridden on it safely and securely.  The majority of bikes here are sturdy, upright and often almost "regal' (they are called Omafietsen - Grandma Bikes) and they're not designed for speed but for ease and comfort. This is again testament to cycling in the Netherlands not being a fad but a fair, fit and above all fun way to get around. A little fact to make you realise how far this country and infrastructure has come; in 2016 there were 629 road deaths and the population was over 17 million.

What I personally like about the Netherlands' (all natural) love affair with bikes is that it is all inclusive. It's not just for the old or young, it's not just for the rich or the poor, it's not just for one race or one gender. Unlike in other countries, cycling doesn't divide, it unites. You could be suited and booted heading to the office, or a stay at home mother of three taking the children to school - all colours, all ages, all lifestyles - everyone cycles here, there's no distinction between those who do and those who don't. Everyone does.  And though I maintain that it's not a big deal for the Dutch, for little old me, an outsider who fell in love with her second-hand, upright bike from the first moment I sat on it and it squeaked back at me, I do feel like I'm part of something and that it's a really big deal.

And if you're a little nervous about cycling in Amsterdam or in another Dutch city, please read over my advice and tips for cycling in Amsterdam as they'll hopefully help you get the most out of your trip here, without falling foul of any "cycle rage" either your own or anyone else's! 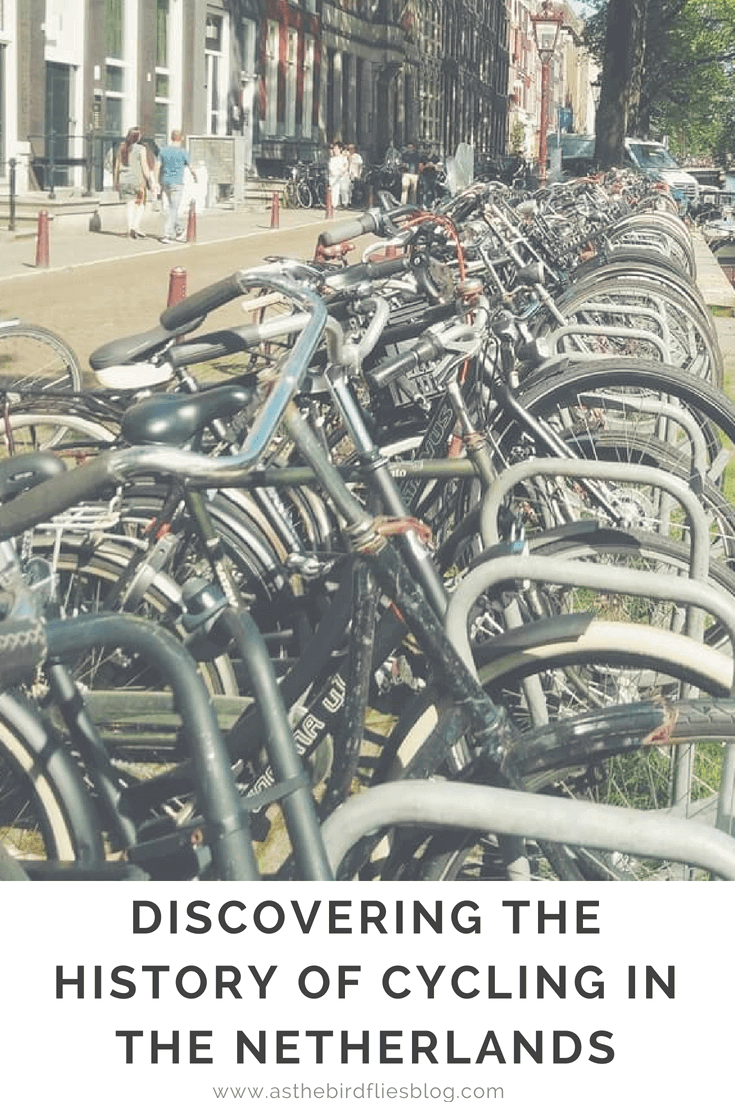 A big thank you to a number of blogs that I've been reading about the subject which ultimately helped and prompted me to write this post. I found this blog and particularly this post helpful, I loved reading this post about another blog post - fascinating. S

Londoner turned wanderer, Frankie is an author, freelance writer and blogger. Currently based in Amsterdam, Frankie was nomadic for two years before starting a family with her Australian partner. Frankie is the author of three short story collections, and is a freelance writer for travel and creative brands. In 2017, she launched WriteNOW Cards, affirmation cards for writers that help build a productive and positive writing practice. When not writing contemporary fiction, Frankie shops for vintage clothes, dances to 70s disco music and chases her two young sons around Amsterdam.
Find Frankie on Facebook, Twitter, Instagram, Pinterest, and Google+.
THE NETHERLANDSAMSTERDAMCYCLINGTRAVELTRAVEL STORIES
Next
My Thoughts: Leaving London
Previous
MusicMonday: Running out of time by Muse
Posts you may also like: