Amsterdam Travel: Why You Must Visit Begijnhof in Amsterdam

Begijnhof in Amsterdam isn't a secret, but its stories feel like they are.... or should be.

A triangular grass courtyard surrounded by some of the city's oldest houses, Begijnhof - named after the lay Catholic female order, Begijnen who lived there for centuries - is worth visiting for just a few minutes if you ever find yourself in the centre of Amsterdam. Read the plaque at the entrance, look up at the houses and marvel at the stories that have played out there.

Below I share some tips for visiting Begijnhof as well as some of the things I learned about this special place in the busy centre of Amsterdam. It's easily one of my most favourite free things to do in Amsterdam, so I highly recommend it to be added to all visitors' Amsterdam bucket list! I also think visiting Begijnhof Amsterdam is a lovely thing to do if you're travelling solo in Amsterdam. For more Amsterdam travel blog posts offering advice, tips and inspiration head here!﻿ 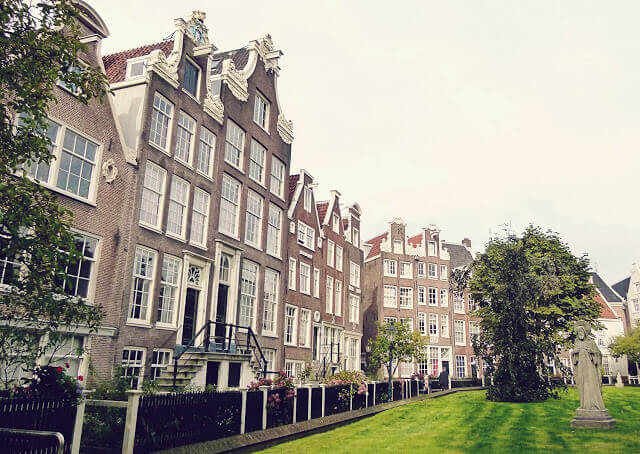 There are a few entrances to Begijnhof but my favourite is through what seems like a secret door on Spui. Stand in the square there and it won't take you long to find it as you'll see people coming and going through it! The other entrance is

I'm not 100% if these entrances close at certain times of day - i.e. at night - but as mentioned above this small courtyard is still home to people so please be respectful and mindful of this when visiting. The place is a naturally peaceful and quiet little oasis in the centre of Amsterdam - let's keep it that way!

If you're travelling to Amsterdam with kids, this may not be the best place to take them. Yes, that neat little grass area looks very inviting for them to run around - and great, no bikes or traffic! - but Begijnhof is considered a special, and to many, holy place so please don't let kids (of any age!) run wild.

You can go on tours that take in the Begijnhof courtyard, and possibly the best way to do this is by booking a personalised tour of Amsterdam so that you choose exactly where you want to go - the guide will still know plenty of other places and plenty of history to share with you!

Begijnen - or Beguines - is the word used for lay Catholic women who gathered together to form a sort of commune whereby they lived and worked together, closely connected to a church or chapel, doing work in their local community. Dating back to the 12th century, they were established all over Germany, Belgium and the Netherlands and were a popular way for religious unmarried women to serve and it is thought the the Beguines of Amsterdam were the first.

Though they wore habits and dressed in long black dresses they were not nuns; they did not take religious vows and could ultimately marry should the occasion arise. Beguinages - or Begijnhofs - were where these women lived, somewhat separately from the rest of the community. Beghards were the male equivalent.

In Amsterdam, the Beguines were partially responsible for assisting in building the now busy down-town area now known as Spui (pronounced "spow"). In the early 1400s their commune, which stood on the same site as it does now, was growing and so they filled the marshland they were surrounded by with rubbish and sand so they could build on it.

Amsterdam had not one but two "Great Fires"- in 1421 and 1452 - and the original Beguine chapel and surrounding homes were destroyed by the end of the latter, but this allowed the houses to be rebuilt in brick. While the houses and church have all since been reconstructed in various forms - most have 17th or 18th century facades - many still have their original woodwork from this time.

The Begijnhof is also home to the oldest wooden house in Amsterdam. Almost directly opposite the church is the black fronted "Wooden House" which dates back to 1528.Inside the chapel, you will find many of the pulpit panels were designed by ground-breaking Dutch painter Piet Mondrian.

When Calvinist rule swept through the Netherlands, the Catholic Church was overturned and forcefully rejected as the country's religion. The Reformation was far-reaching and in 1578 it became forbidden for anyone to practise Catholicism. The Beguine's church was handed over to the occupying English and this is why you will see the chapel in the Begijnhof is called "The English Church" and services in English have been held there since 1607.

Like many Catholics across Amsterdam, Catholic Mass in the Begijnhof was now held in secret in people's homes. What is interesting about the Begijnhof in Amsterdam, is that the women still continued to otherwise publicly profess and perform their lay duties as Catholics within the community, but the ruling Protestants never interfered, thus letting it become the only Roman Catholic institution to stay active during what was otherwise a period of suppression.

The last Beguine of Amsterdam died in 1971, bringing to a close hundreds of years of Beguine inhabitants in this special courtyard of stories. But the legend continues in a roundabout sort of way with it still being a place that only single women live in, supported by the local government. Though restored in 1979 to improve and maximise living conditions, the houses continue to provide communal living for only single women who live in this unique corner of Amsterdam, a courtyard full of stories.

Finally, and I think I've saved the best story for last, if you visit Begijnhof on the 2nd May or shortly afterwards you'll find a small section of the pavement near the grass area will be covered in flowers. This is where the body of Cornelia Arents lies. Before she died in 1654 the Beguine chapel had become a Protestant church and in protest of this she demanded not to be buried in the church graveyard as centuries of Beguines had been previously.

Despite her request, she was originally buried in the church, but those who campaigned against this in her name were successful and shortly afterwards, her body was moved to a place on the outside of the church's wall.

However, when work needed to be done on this wall not long after this her body was moved to the walkway near the grass, where she is honoured each year now. This somewhat unsettling turn of events provides the perfect background to the many reports over the centuries that claim to have seen her ghost wandering the grass courtyard at night!

Why You Must Visit Begijnhof, Amsterdam

As I walked around Begijnhof recently to take some more photos, I thought again, how strange it must be to live somewhere so steeped in history and now so looked upon, examined and interrogated by tourists. How strange to look out of your window and see crowds of strangers taking photos of your home.

This thought made me feel uncomfortable so I pulled my camera away from my eye. Then I saw a woman on the far side of the grass courtyard. She was perched on one of those wheeled walkers that offer support to elderly or unstable folk and also act as a temporary seat. She was sat on the front of it, wearing a bright pink cardigan and she had her hands clasped in front of her (you can see her in the second photo if you look closely). Watching me and the small throng of tourists I was surrounded by she had a level smile on her face.

Of course, I can't possibly pass indicative judgement, but I can say that she seemed neither upset or bothered by these strangers hanging around her home. In fact, she seemed quite content and possibly proud by it. Interested or invested enough to venture outside and watch for a while. It wasn't until long after I'd left Begijnhof and I thought about this woman as a modern-day Beguine, welcoming strangers into her corner of the world, serving her community by respecting the floods of tourists and watching over them as they discovered the Begijnhof's stories.

It's free to visit Begijnhof and the chapel and I highly recommend you do. Read about more free things to do in Amsterdam here.﻿ 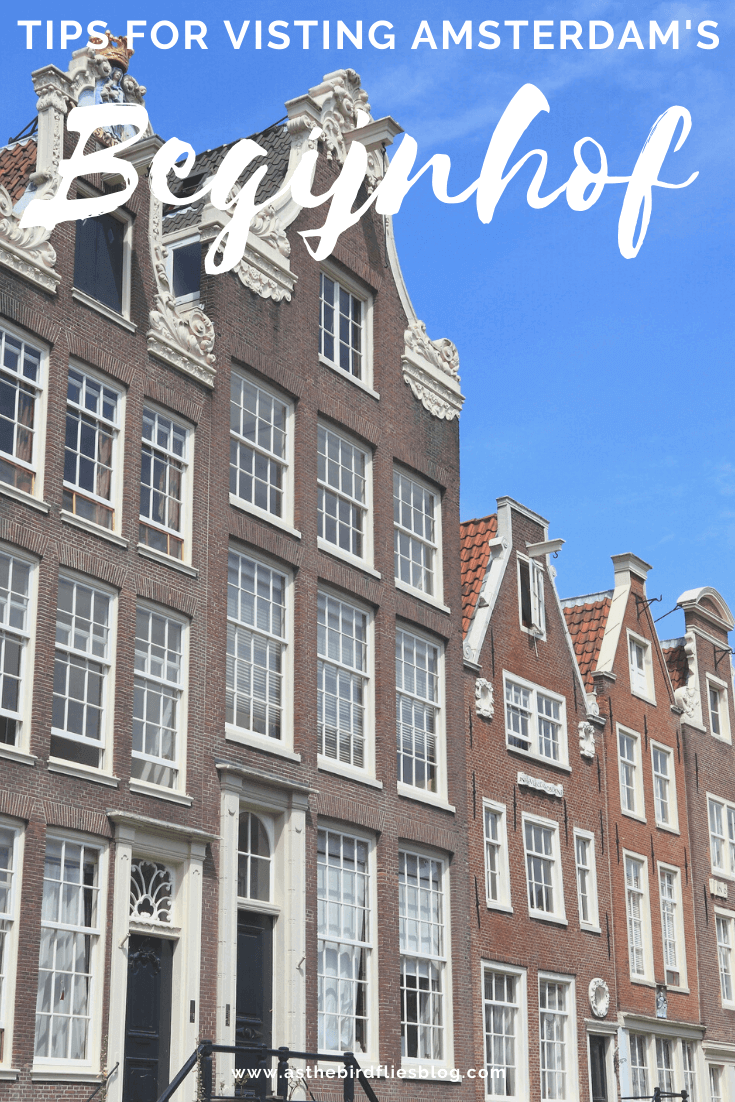 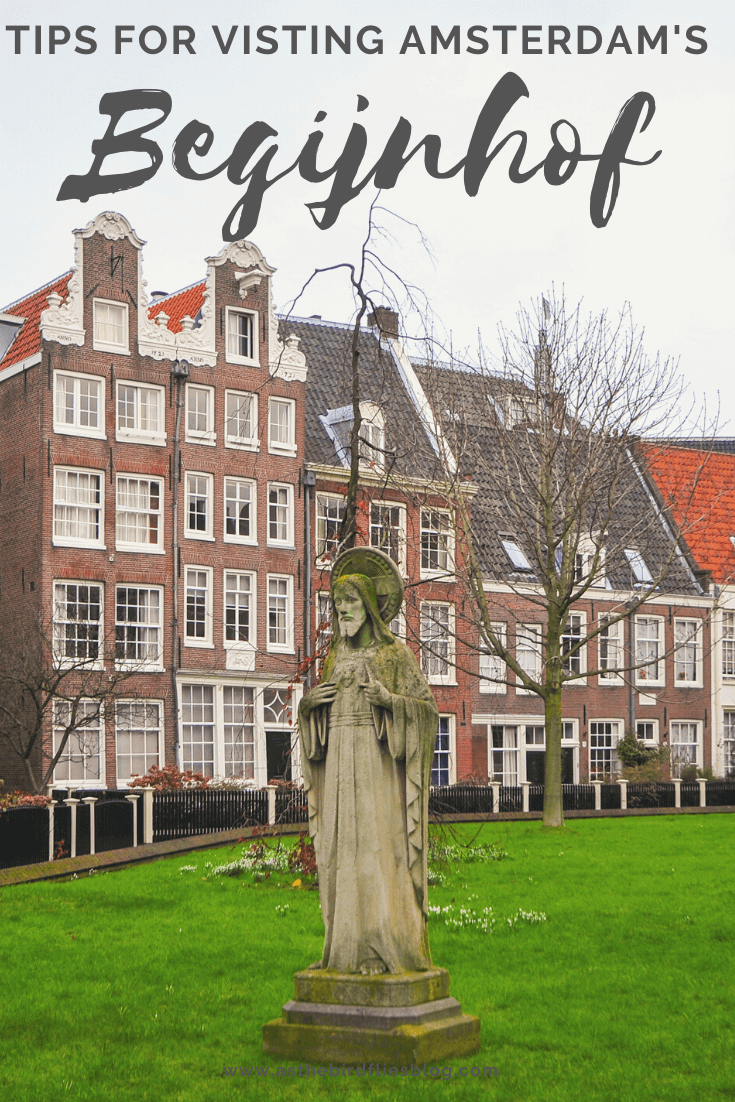 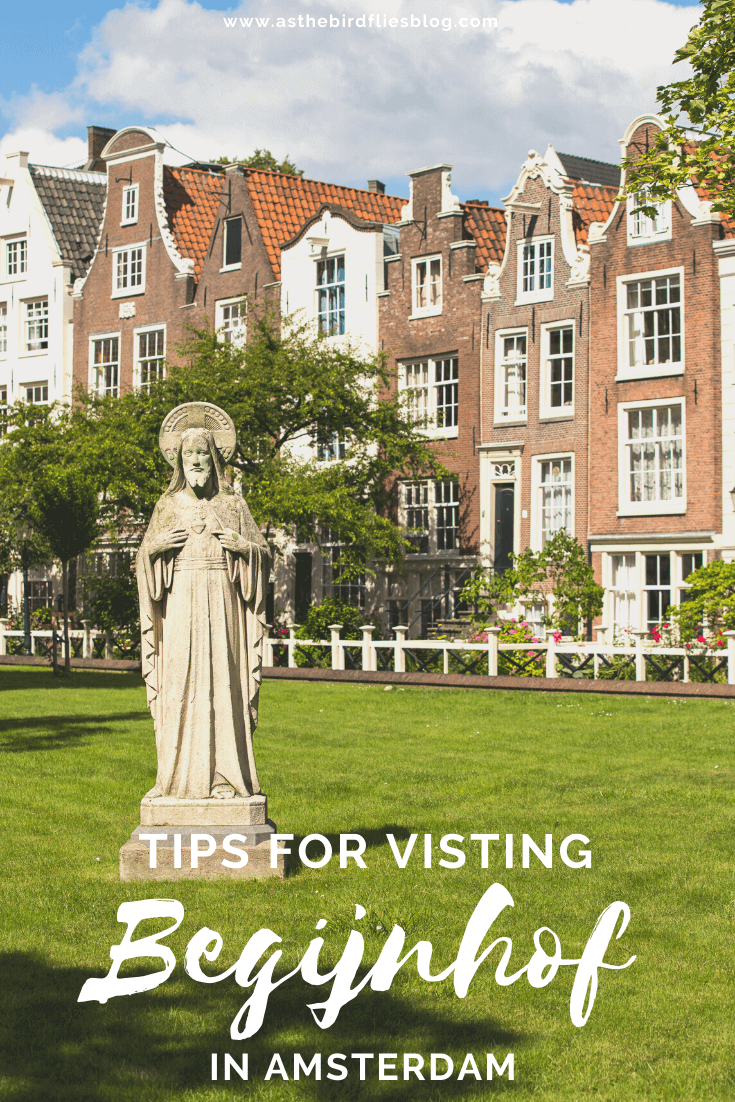 Londoner turned wanderer, Frankie is an author, freelance writer and blogger. Currently based in Amsterdam, Frankie was nomadic for two years before starting a family with her Australian partner. Frankie is the author of three short story collections, and is a freelance writer for travel and creative brands. In 2017, she launched WriteNOW Cards, affirmation cards for writers that help build a productive and positive writing practice. When not writing contemporary fiction, Frankie shops for vintage clothes, dances to 70s disco music and chases her two young sons around Amsterdam.
Find Frankie on Facebook, Twitter, Instagram, Pinterest, and Google+.
AMSTERDAMAMSTERDAM TRAVELAMSTERDAM TRAVEL ADVICE
Next
Luxury Family Travel: Best Resorts for Luxury Family Holidays

Previous
How to Write a Book: Part Four - Character Development