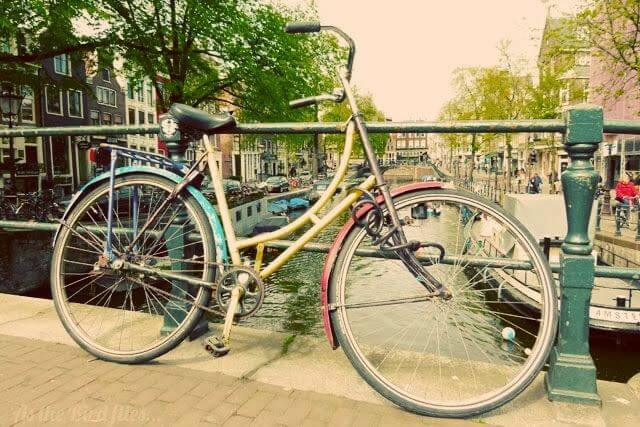 In the Netherlands, when you don't have a bell you make the noise yourself. I've mentioned before how on bikes, bells aren't used to alarm or warn of an impending doom or to bemoan somebody's mistakes. Bells are a gentle way of saying "Mind how you go, I'm coming up behind you and I'm going a bit faster than you so just stay where you are and I'll squeeze past you on your left. Thanks!"

In the Netherlands, when you don't have a bike you hop on to the back of your friend's bike - a feat made to look so easy and simple by numerous blond-haired Dutchies. But it's a challenge that NewMan and I are yet to master with any grace... not too mention making the back wheel on his bike look very, very flat.

But when the sun goes down - which he has been doing increasingly early in recent days - there isn't much you can do to compensate. You can't fake light.

Last week the wire that links the dynamo mechanism on my front wheel to my front and back lights snapped thanks to an overzealous and nameless neighbour who pulled his bike away from mine a little too quickly, not realising his bike was somehow attached to my wire

My first thought on this was... "Oh well, doesn't matter. The Dutchies don't all bother with lights..."

And then I saw this video.

It's a campaign by Fietserbond, the Dutch Cyclists' Union, and Ik Wil Je Zien translates as "I Want to See You". They contacted me and asked me to support them in sharing this video, which I think is very successful in sharing a very valid and valuable message in an upbeat and lively way. There's more information on their website, if you'd like to find out more.

It made me think, at least. Cycling without lights is not only dangerous, foolish and irresponsible; If you are not seen by another bike, motorbike or car it is unlikely to end in anything as pleasant or funky as a flash mob dance like this one.

While I've been quick to try and assimilate with the Dutch in Amsterdam in many ways - I'm addicted to the seasonal  kruidnoten , I now have an Albert Heijn Bonuskaart AND an OV-Chipkaart and I even refer to things as "gezellig" - I have become increasingly nervous about how they cycle. Red-lights are ignored and jumped, pavements are mounted and ridden along and the near-misses have become too many to count.

And yep, the no lights thing. I don't think I'll join them on that either. Because I want to be seen and I want to see you.

My advice, if you find yourself in the Netherlands on a bike, is like no advice anyone else will give you. And maybe some Dutch cyclists will want to kick me out for saying it, but here it is anyway.

Go slow.
Go steady.
Get lights.
Take care.
Enjoy.
Now, I'm off to fix my lights and get some extra reflectors too.

This post is sponsored by Fietserbond, the Dutch Cyclists Union, but the words and opinions are my own. I rarely do such focused sponsored posts but I believe in their cause and message. The number one reason we live in Amsterdam is the cycling - I'm keen to keep it such a safe activity.  Thanks for supporting the causes I believe in and allowing me to share them on As the Bird flies.

Londoner turned wanderer, Frankie is an author, freelance writer and blogger. Currently based in Amsterdam, Frankie was nomadic for two years before starting a family with her Australian partner. Frankie is the author of three short story collections, and is a freelance writer for travel and creative brands. In 2017, she launched WriteNOW Cards, affirmation cards for writers that help build a productive and positive writing practice. When not writing contemporary fiction, Frankie shops for vintage clothes, dances to 70s disco music and chases her two young sons around Amsterdam.
Find Frankie on Facebook, Twitter, Instagram, Pinterest, and Google+.
VIDEOTHE NETHERLANDSAMSTERDAMEUROPECYCLING
Next
Life after NaNoWriMo: What next for my novel?
Previous
A photo from: Albert Cuyp Markt in Amsterdam
Posts you may also like: