This is the final interview which will feature in my NaNoWriMo Inspiration posts. I've saved it for last for a good reason, not least because of what my sweet interviewee is very inspiring. Amy is a blogger, book reviewer and fanatic and a writer herself. She fits in writing her novel around a full-time job and more recently she's also just moved house, but is still editing a novel that was longlisted for the Bath Novel Award this year. Plus she also has rainbow colour coordinated book shelves!! (You can also read her review of Shy Feet here; I was honoured how beautifully written her review was, and I also answered some questions for an interview on her blog here.) 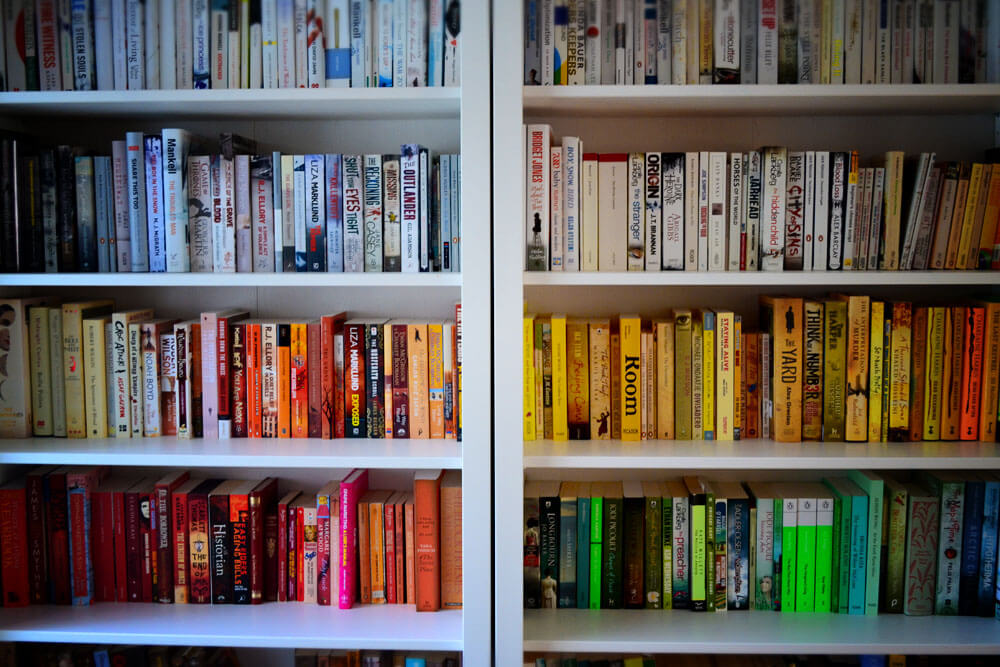 Frankie: When did you do NaNoWriMo and what did you work on?

Amy: I've been aware of NaNoWriMo for a long time, but I never felt that I had a suitable project that would allow me to take part. Then in 2013, I decided to go for it. I had an idea for a novel that I’d been working on, on and off, for about eight years. NaNoWriMo seemed like the perfect opportunity to give the story a chance. I’d already written the first chapter, so I took it from there.

Frankie: How would you describe your approach to the challenge?

Amy: I just went for it! As I’d been planning the novel in my head for so long, I did have a sense of where it would go, although I didn’t have much in the way of notes to work from.

One tip that helped me was to leave a gap if there are any details you’re unsure of, such as a character’s name, and carry on writing. You can always come back to it later and you won’t waste valuable time agonising over something minor.

Overall, I wish I could have focused completely on the challenge, but I had to squeeze in as much writing time as I could around work and blogging.

Frankie: How far did you get?

Amy: I made it to about 37,000 words, which I was actually really pleased with. It meant I had a solid chunk of my book, more than half as it turned out.

Frankie: Was there a reason you didn't write more?

Amy: Time was really the biggest issue for me. There are only so many hours you can spend at the computer each day, both at work and then at home, before you burn out completely. And being organised with my writing time is something I’ve always found difficult, so it was hard to fit in the extra hours that I needed on quite an intense schedule.

Frankie: Even though you "lost" (I hate that phrase, I think everyone is a winner for even trying!), did you learn something about yourself or your writing while doing NaNoWriMo?

Amy: Absolutely! I even wrote a blog post about it. I have written one novel previously, about six years ago, but apart from tweaking that, I had done very little creative writing since. By allowing myself to work on the project and making it a priority in my life I began to feel like a writer again.

Plus I was fortunate enough to have the manuscript I wrote during NaNoWriMo longlisted for the Bath Novel Award in March, which made all the effort worthwhile and encouraged me to keep working on the story.

Frankie: Would you try it again? If so, what would you do differently?

Amy: I would love to do NaNoWriMo again, but I’d approach it the same way: with a particular project in mind. I’d really like to clear out some of my other commitments to make more time for the writing, but I don’t think work would let me have the month off!

I’m not taking part this year because I’m still editing the novel I wrote last year and want to focus on that. The idea for my next book isn’t there yet.

Ideally, NaNoWriMo would be a great time to work on a first draft, before finishing it off over the next 10 months or so, ready to start a new book the following November.

Frankie: Do you have any tips for people currently doing NaNoWriMo right now? Especially now it's so close to the end!

Amy: Don’t get too caught up in what other people are doing. Last year, two of the NaNo participants I follow on Twitter managed to hit their 50,000 word target – in just over a week!

It’s easy to feel inferior against people like that, but just focus on your own project and have fun with it. If you have to miss a day here and there, don’t beat yourself up.

Even if, like me, you don’t manage 50,000 words, you’ve still produced a substantial piece of work that you can build on over the next few months.

Thank you Amy for reminding everyone that there's as much to be gained from 37,000 words as there is from 50,000! Very best of luck with that novel...

So there's just THREE DAYS LEFT PEOPLE! Get tapping those keys, see through the blurry words and don't stop to correct a spelling mistake.

Londoner turned wanderer, Frankie is an author, freelance writer and blogger. Currently based in Amsterdam, Frankie was nomadic for two years before starting a family with her Australian partner. Frankie is the author of three short story collections, and is a freelance writer for travel and creative brands. In 2017, she launched WriteNOW Cards, affirmation cards for writers that help build a productive and positive writing practice. When not writing contemporary fiction, Frankie shops for vintage clothes, dances to 70s disco music and chases her two young sons around Amsterdam.
Find Frankie on Facebook, Twitter, Instagram, Pinterest, and Google+.
NANOWRIMO INSPIRATIONNANOWRIMO INTERVIEWNANOWRIMO
Next
NaNoWriMo Inspiration (Day 4): Here's what you have to look forward  to.
Previous
Fifteen Little Photos from Tuscany
Posts you may also like: