Words From My Stories: Leaving Rotterdam

This is an opening extract from the short story Leaving Rotterdam which is featured in my short story collection, Nine Women. You can buy the ebook now on Amazon.

Please note that Leaving Rotterdam is a work of fiction but is based on a true story, that of Lodewijk Pincoffs who was one of the founding fathers of the city of Rotterdam and one of the driving forces behind making Rotterdam the world-leading port it became. Here I tell some of his story from his wife Esther Pincoffs' perspective on the eve of the day the Pincoffs family fled Rotterdam under a very dark cloud of shame...

Our bags are packed. They stand in his study, out of sight. Like the truth.

The boys will have to take three each as they are stronger than us. Lodewijk and I will carry two. I cannot assume there will be anyone else to help us. I packed them in such a hurry this morning, while Marolijn was out fetching the week’s groceries we will not eat, that now I cannot remember what is inside each one. I only know that I have left behind the things that seem most important - our winter coats, the boxes of letters from my sister in Amsterdam, our wedding photo framed in silver on the mantelpiece - but these are the things that must stay. If removed their absence will give us away. Marolijn is not a sharp girl, but she knows what goes where and when things are away from their rightful place.

I try to imagine how tonight is going to unfold. I wonder what words my husband will use to explain. I try to imagine my sons’ expressions and their responses. Will they ask questions? If so, will they be the questions I would ask if I thought it would do any good?

It feels almost impossible to imagine the noise that will fill the house tonight with everyone out now and I must enjoy the calm while it lasts. The boys are still at university or school, my husband is still at work and Marolijn is supposed to be busy helping Mevrouw Vos with dinner though I can’t yet smell cooking. In fact, when the noise of the thousand thoughts bouncing around my mind fall silent for a moment, I am able to hear their muffled laughter and hushed words. If I had the desire to stand up, walk down the corridor and push the kitchen door open a little I know what I would see. They will be sitting across from one another at the kitchen table, a pot of watery tea between them, likely sharing a slice of the ginger cake I asked Mevrouw Vos to make last Friday but wastefully then forgot about. But I don’t want to waste time checking up on the staff today. Indeed my time is running out. I can feel it float through my fingers and beyond me. I almost want to reach out and grab a handful of it, like my youngest son Pieter used to try and do with the smoke from the first steam ships we ever saw as we watched them slide their way towards us on the shore.

“Mama, why can I not grab it and take it home with me?” He would ask.

“Because some things are not ours to own,” I had told him.  I would use that line again and again when he asked me why, if his father owned the companies that owned the ships, then why couldn’t we have our own? And if his father was in charge of constructing those grand new port buildings, like the new head office for the Rotterdamsche Handelsvereniging which you would even be able to drive a horse and carriage through, then why couldn’t we live there and watch over the port he was making the finest in Europe?

“He’s not only building all these things for us, Pieter,” I explained. “It’s for everyone.”

I mustn’t waste time thinking about my sons. They are coming with us after all. I must focus on the things that are not, the things I must leave behind. I turn and look around the room. The sun is rising quickly and filling  more of the space with a dusty light. (When was the last time Marolijn beat the curtains in here?) It lands on the mantelpiece and dances off the silver elephant Lodweijk bought me to celebrate our 25th wedding anniversary last year. One of his many gifts from Africa, it is not just an elephant but an elaborate mounted ornament to be used as a fruit bowl or perhaps to display other sweet treats. However, I never use it as such and the elephant is what always catches my eye, its long tusks curving downward, carved out of the ivory the mammals’ own are apparently made of. I do not like to look at the load - the glass bowl - it carries on its back, elevated up in the air. Instead I like to think of the elephant without a weight to bear and without the elaborate clothes he wears in the silver statue.

“Have you ever seen one?” I once asked Lodewijk.

“No, they certainly do not roam the seaports where I have been.”

“And Henrij? Does he ever see them in the wild?”

To this Lodewijk would say something like, “Henry wouldn’t have had the time if he’d wanted to. He works harder than I do.”

I wonder about Henrij now. Henrij and Adrianna, Lodewijk’s sister. I think about their seven children and what will happen next for them, but there is no clear path I can pin my hopes to and the worst possible outcome is one that makes me dizzy. I breathe deeper. I fix my eyes on the elephant to try and focus. There is a small man or boy standing next to it at the base of the ornament. He boasts a weapon across the back of his shoulders and he wears nothing but a scrap of fabric below his waist. I don’t like the way he balances a hand on his hip. It is a daintiness that doesn’t suit his savage appearance.

Read the rest of the story in Nine Women: Short Stories, available for download on Amazon now.

If you'd like to receive future stories from Twelve for free (plus a load of good stuff about travel, work, life and love from around the web) then please sign up to my newsletter.

Photos from my visit to Rotterdam during Wereldhavendagen festival in September.

Londoner turned wanderer, Frankie is an author, freelance writer and blogger. Currently based in Amsterdam, Frankie was nomadic for two years before starting a family with her Australian partner. Frankie is the author of three short story collections, and is a freelance writer for travel and creative brands. In 2017, she launched WriteNOW Cards, affirmation cards for writers that help build a productive and positive writing practice. When not writing contemporary fiction, Frankie shops for vintage clothes, dances to 70s disco music and chases her two young sons around Amsterdam.
Find Frankie on Facebook, Twitter, Instagram, Pinterest, and Google+.
TWELVE STORIESFREE FICTIONWRITINGSHORT STORIESWORDS FROM MY STORIESTRAVEL FICTIONROTTERDAM
Next
Introducing Twelve... A short story collection published month by month.
Previous
This Year Will Be Different - Will Yours?
Posts you may also like: 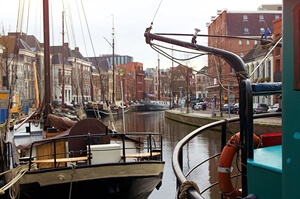 Netherlands Travel: The Best Cities in the Netherlands